The emergence 40 years later of a tightly edited, slimmed-down version of a long-lost novel from the writer who first defined Asian American literature is an unexpected gift.

That’s because to read The Confessions of a Number One Son in 2015 is to peel back the decades and discover the creative foundation of the plays and later fiction of Frank Chin, in the moment before he became consumed with the polemics of separating the real from the fakery in the work of others.

In an early 1970s America where the postwar generation was just coming of age—where the world still celebrated the model minority, the Chinese Christian autobiographies of Betty Lee Sung and Pardee Lowe, and the movie stereotype of Charlie Chan—Frank Chin was putting a self-proclaimed Chinaman voice at the center of his stories. It was an act of self-invention he was perfecting in tandem with his better-known stage plays, The Chickencoop Chinaman and Year of the Dragon.

Golford Tam Lum escapes the father he detests and the pain of his mother’s accidental death in San Francisco, flees to Hawai‘i where he discovers he hates Maui, meets the last white actor to play Charlie Chan in the movies, and takes up with a 43-year old ex-nun who is the daughter of the last Charlie Chan, all the while trying to write his play and yearning for the two kids he never gets to see.

Tam inhabits a cartoon purgatory in which cane fires burn amid the yapping of “wild toy Chihuahuas, Pekinese, and poodles running hungry in the night.” The last Charlie Chan insists Tam has been sent by a secret Chinese American bowling club to assassinate him, while Tam sits with him to smoke pot and drink beer, ignoring Chan’s pleas to write his autobiography; Tam instead trains him for a Golden Gloves boxing match.

What animates this often-hallucinatory dreamscape is a stream-of-consciousness that boils over with goofy wordplay, tumbling imagery, and brutal humor. Images crackle, as when Tam, waking up struggling for breath in the hot, stillborn Hawaiian air with his radio, “worked the dials like a safecracker, listening, and working my ear through static, banshee whistles, and strange whirrs tearing up the night.”

Flights of prose build with an insistent rhythm–long, swirling internal monologues like those in John Okada’s No-No Boy, which Chin and company had just discovered during this time. Both books frame immigrant fathers as figures of derision, and Tam has comic contempt for his: “I wanted to walk him into a wall under the freeway. I wanted to see him trip on a curb, step in dogshit or in a wad of gum or a bum’s green spit, and hear him cut a long foghorn fart in front of people, so I could laugh at him and take my time getting around to seeing if he was all right.”

But other moments carry an unexpected poignancy, as when Tam asks for $500 so he can leave town: “The old man would have given me the money after I’d eaten the steak he fried. Giving me food and money were the only ways he knew how to reveal his love. I’d asked him for money as my inheritance from Ma, and he fried me one side of a steak he’d wanted me to eat.” Of the foster parents who raised him: “The first things I’d ever known have died. They are dead. I keep track by the memory of hit tunes, the language and town I was in when the news came, by who had not died yet and who is dead now.”

That pervasive undercurrent of sorrow and self-awareness will be unfamiliar to a generation that has grown up knowing Chin only for the angry ayatollah image he has cultivated. This book lets them in on a secret: Frank Chin is not an ogre.

For cheap fun in 1970s San Francisco, friends would hang out at Chin’s flat in the Richmond District, pull out black spring binders from shelves he’d built as a carpenter, and leaf through pink and yellow 5-ply carbon copies of the infamously funny and profane letters he fired off to friend and foe alike. On occasion we’d find long passages that offered glimpses into a novel, then called Charlie Chan on Maui, that never came out due to a copyright claim by the Chan estate. Later we saw chunks of it staged as a play-in-progress at the American Conservatory Theater under the title, Gee, Pop! A Real Cartoon. After that, only bits and pieces. 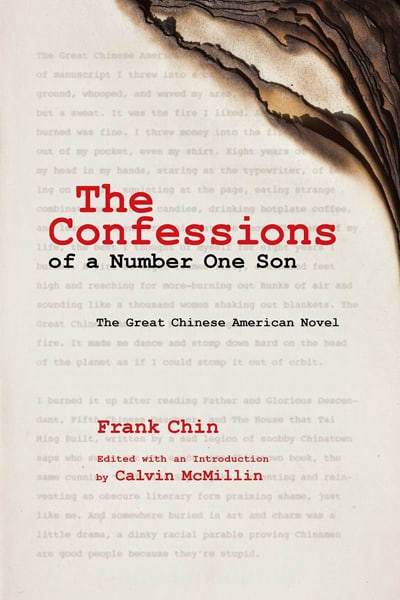 Thanks for this literary reconstruction go to editor Calvin McMillin, a Singapore-born, Oklahoma-raised Ph.D from the University of California, Santa Cruz, who stumbled upon the pieces of Chin’s manuscript scattered across university archives: in Chin’s own collection and in those to whom he’d sent sections. McMillin spent four years rounding up all the pieces, painstakingly retyping all 662 pages, then judiciously removing repetitions, narrative dead-ends, and chapters used in later works. The result focuses the through line of the novel, while retaining the precise cadence of the narrative and the callbacks seeded throughout. The man who never allowed his work to be edited, is well-served here by his editor.

McMillin’s extended introduction includes the most authoritative Frank Chin biography to date. As he recognizes, much of Chin’s writing comprises one vast book, and this biography combined with Confessions itself form a Rosetta Stone for connecting how his life informed his work.

Let’s put this in the current context of Fresh Off The Boat. The achievement of the TV series based on chef Eddie Huang’s autobiography is that both assert an authentic Taiwanese American voice, in which it is the whites who are on the margins as the foreign “other,” not him. Frank Chin defined that sensibility for Asian America 40 years ago in his essays, plays and in this book, in which Tam searches the airwaves for “The Movie about Me.”

“The Great Chinese American Novel – mine! mine! – two pounds of manuscript I threw into a cane fire,” is the book’s opening line. If the concept of the Great American Novel is something that reveals the truth of the U.S. at a specific time, written by an American with great knowledge of the common American, The Confessions of a Number One Son can be read as just that thing for Chinese America.

This heretofore unknown work captures the birth of a consciousness that is neither Asian or white American, but a third thing we witness being forged in the mind of its author. Its publication now should spur renewed interest and a critical reevaluation of the entirety of Frank Chin’s work, and cement his literary legacy.

Frank Abe was a founding member of Frank Chin’s Asian American Theater Workshop in San Francisco, and later collaborated with Chin in creation of the first Day of Remembrance here in Seattle.