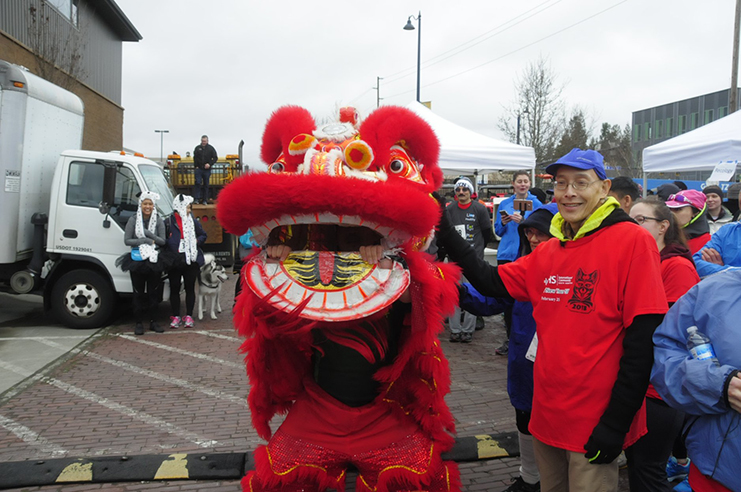 When 2020 draws to a close, Ron Chew will retire as director of the International Community Health Services Foundation. He is ready to enter a new phase in his life.

“You look at the clock, and approaching age 68, which happens next year, it’s time to figure out what else I want to do,” Chew said in a recent interview with the International Examiner.

Chew realized, after the murder in 2015 of his close friend and neighborhood safety champion Donnie Chin, that he now stood alone in having worked continuously for decades in the CID.

“Once he was gone, there was nobody else left who was left who was a peer,” Chew said. “Everybody had moved on, retired.”

“I was pretty tired, and I also didn’t want to get jaded,” Chew continued. After he retires, Chew looks forward to more freedom and the opportunity to mentor young people “on their journey of being idealistic and trying to change the world.”

Chew will also continue part-time at ICHS to help raise money for an aging-in-place site on Beacon Hill, in partnership with Kin On.

The pages of Chew’s memoir vividly bring to life vignettes of his upbringing in the CID and Beacon Hill, his first-hand accounts of decades of CID history and change, touching stories of reconnecting with his mother and father’s pasts, and countless other treasures.

In hindsight, Chew’s passion for journalism took root at an early age, when he created his own newspaper at age 11. Early experiences working at the Hong Kong Restaurant where his father was a waiter fed his interest in being a writer.

“I was fascinated by the stories of all these men who came to America as immigrants and had very interesting lives,” he said. “I just remember between bussing dishes and all the restaurant chatter, hearing them talk about things in China and their early lives, and I was mesmerized.”

Chew studied at the University of Washington during the Watergate era and the civil rights movement. It was an exciting time to be a student journalist, and Chew devoted himself to reporting for the UW Daily.

His time there was marred by racial discrimination, when Chew applied to be an editor at the UW Daily and was never interviewed, while white students who didn’t apply were selected.

He left the UW initially without a degree partly as a result, returning to the CID to work as a reporter and then editor at the International Examiner.

Chew and other writers at the Examiner covered stories that mainstream media ignored, like the plight of immigrant garment workers, the need for healthcare in the neighborhood, the work of local organizations and the stories of small businesses.

The Examiner also provided more respectful and accurate coverage. Mainstream newspapers sensationalized the Wah Mee murders of 1983 and would publish “blaring headlines” in red about a “Chinatown massacre,” Chew said.

Chew wrote profiles of the victims, while mainstream media didn’t take the time to find out who they were.

Chew worked at the Examiner during a time of change and activism. In the back of his mind he understood that the newspaper was documenting history.

“We were young and idealistic like a lot of the folks now in Chinatown-ID are,” he said. “You didn’t really think about failure. It’s that idea when you’re young you’re invincible, and anything is possible.”

Chew hesitated to apply for a job as director of the Wing Luke Museum, despite encouragement from Betty Luke, Wing Luke’s sister, who reminded him that what he lacked in museum experience was made up for by his rootedness in the community.

Chew applied, partly in the hope that the Chinese Oral History Project of Seattle that he organized in 1990 could become an exhibit.

It did, as did an award-winning exhibit about Japanese American incarceration during WWII, and others. He also led a successful $23 million capital campaign to preserve the East Kong Yick building as a new home for the museum.

As director, Chew wanted the Wing Luke to be a “community based, Asian American institution,” rather than one focused on Asian folk arts. He saw the museum as “a gathering place for dialogue and community issues and social change, and not as an institution simply looking back on history and being impartial,” he said. “I was really talking about an activist institution.”

This meant exhibits designed by community activists and elders, rather than humanities scholars or subject specialists.

The approach drew skepticism at first, even from the museum’s board.

“A lot of folks said, ‘Remember, a museum is not a community center, Ron.’ And I was thinking to myself, ‘Why isn’t it? Isn’t that what it’s supposed to be?’” Chew said. “Now museums have come around largely to that viewpoint.”

Over time, curators at the Seattle Art Museum, Burke Museum and Museum of History and Industry were inspired by what they saw at the Wing to adopt a more community-centered approach.

Exhausted after the Wing fundraising campaign, Chew didn’t think he would continue in that vein, but he ultimately accepted an offer to work on fundraising for ICHS, feeling he could help make a difference for the agency that provided services for his own parents.

He started during a recession, when ICHS was facing potential loss of nearly half its funding.

He takes pride in collaborating with others to achieve things, at ICHS and everywhere else. “You need some folks you can bring along with you who are travelling the same path and have the same idea,” he said. “When you’re centered in that kind of thinking, you can achieve some amazing things, but that’s a skillset that has to be developed.”

Chew has seen the CID change. In the 70s, activists created institutions like InterIm, IDEC, ICHS and the International Examiner, built housing and the Danny Woo Garden.

“I have watched the passing of the generation of Filipino manongs who used to be the majority population in the hotels. I’ve watched Manilatown basically vanish, Nihonmachi, watched it vanish, African American businesses, watched them vanish, and I’ve seen Little Saigon emerge,” Chew said.

He wonders how the COVID-19 pandemic will change the face of the neighborhood, and if people want to continue frequenting restaurants and living in the dense housing.

“What’s the community going to look like after we are able to escape these kind of prison bars of social distancing?”

His memoir is titled My Unforgotten Seattle, and indeed, Chew worries about how well Seattle is holding onto its past.

“I’m heartened that there are people interested in remembering the past,” he said. “But the pace of change is so rapid that I fear that a lot of what Seattle once was will be mindlessly torn down and wiped away in this pandemic period. And then we’ll wake up one day and say, where are we living? What is this place? Does this place still have its soul still there?”

He hopes his memoir will inspire others to tell their own stories, open up their memories, and learn from what came before them.

“It’s about here, it’s about this place, it’s about the ground we stand on, not about some place that’s imagined,” Chew said. “It’s about cherishing what’s in front of us, what’s behind us, what’s around us, and being mindful that sometimes those are the riches that are within easy reach.”