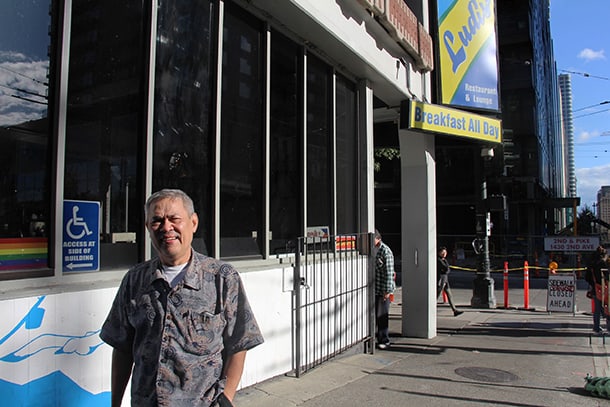 If you’re walking down the streets of Seattle and get a sudden craving for pork adobo, your options may be slim. Filipinos make-up nearly 3 percent of Seattle’s population, but finding a traditional Filipino meal is trickier than you think.

Last year one of Seattle’s most popular Filipino restaurants, Inay’s, closed due to rising rent, making it even more difficult to find a spot to satisfy that craving.

Now, if you search for Filipino restaurants in Seattle on Google or Yelp, there are only a few results. Some of the more well-known ones are Oriental Mart in Pike Place Market, PhilHouse on Martin Luther King Way, Tropical Hut on Rainier Avenue and Ludi’s in the heart of downtown Seattle.

Ludi’s may look like your average breakfast diner, but it is far from it. Walking up the concrete steps of Pike Street and Second Avenue, the air is filled with smells of garlic fried rice, fresh eggs and Longganisa, a sweet Filipino pork sausage.

Gregorio Rosas, current owner of Ludi’s, views his restaurant as a place that brings two cultures together.

By sharing the traditional breakfasts of the U.S. and the Philippines, Rosas has created an environment where Filipino food can flourish.

“I think the best thing about Ludi’s is that I don’t want to be just a Filipino restaurant per se,” Rosas says. “If you have just Filipino food, sometimes people don’t want to try it. They say, ‘No, I won’t eat the blood stew!’” Instead, Rosas serves both American omelets and Filipino breakfast.

“If you have a place where Americans and Filipinos can be together, it becomes happier,” he says.

Ludi’s isn’t just rich in its bold flavors, but also in stories.

Rosas’s first job in the United States was working as a dishwasher. He learned the ropes of restaurant work and adjusting to American culture. He has worked at Ludi’s since 1978.

Rosas spent his childhood living in Manila with his mother and nine siblings. His mother was diagnosed with terminal breast cancer when Rosas was 7 years old. Shortly after, she decided to give Rosas up for informal adoption in the Philippines.

“We were poor,” he says, “I don’t think my mom could handle the idea that she wouldn’t be able to take care of me anymore.”

At 7, he moved out of his family home and into the arms of a foster parent. Because they were so poor, Rosas had to work. The pressure of taking care of his younger siblings began to mount, and although he was young, Rosas knew it was time to find a job.

That year he began working as a houseboy. He bounced from family to family cleaning houses or making meals, taking care of anything that was requested. Rosas continued this for six years before finding work at the terminal moving crates onto barges.

When he 13, Rosas’s life changed when he was spotted at the terminals by an American couple vacationing in Manila.

“They immediately said, ‘You are too young and skinny to be doing this type of work.’” Appalled by harsh terminal conditions, the couple offered him a job as a houseboy in their vacation home.

This time, his work as a houseboy was different. His hosts were extremely generous and offered to send him to school in exchange for work. They even offered to take him to the U.S.

“One summer they said, ‘Gregorio, let us take you to America!’ and I thought ‘Oh my God. Is this real?’” he recalls. “I had no other chance to come to America. This was the best opportunity I could have.”

During his time in Seattle, Rosas has passed that generosity along.

“He petitioned my family to come to the United States and took all of their expenses,” says Justin Pacis, Ludi’s employee for the past seven years. “If it wasn’t for him, I wouldn’t be here with you talking right now.”

Whether it be for his family, his employees, or his customers, Rosas is always eager to help.

“Relatives or non-relatives, it doesn’t matter to him,” Pacis continues. “I see him working with strangers and helping them. I used to think to myself, ‘why was he doing that?’ But when he told me about his life, I started to get it. I started to want to give more. It’s contagious.”

The first taste of the States

In August of 1978, Rosas came to Seattle on a tourist visa and immediately began his career at Ludi’s. Before changing locations in 2011, the restaurant was called The Turf.

The Turf was a traditional American diner owned by a young widow named Patricia Altshuler. Although it was small, it was busy and had a lot of regular customers.

“There was a group of elderly people that would come here a lot. They thought of it as their turf,” Rosas said. “During the afternoons or even all day just to socialize, they played cards. Even the owner was a part of that.”

Watching this community grow, Rosas began to form a special bond with the Turf.
“I enjoyed staying busy there,” he said. “My whole childhood I was taught how to work. It was the life I was used to.”

However, Rosas’ commitment was not solely based on his hard work. The Turf was also a place where he forged lifelong friendships. Through continuous dedication and selflessness, he built a strong bond with the owner, Altshuler.

“She knew I didn’t have a lazy bone in my body,” he says. “I didn’t ever expect any rewards. I was just always there for her.”

In the end, that work ethic paid off.

In 1988, Altshuler passed her business along to Rosas.

“She knew I would take good care of it,” he said. “Any time she needed me, I helped her with no complaints.”

Even other employees have noticed Rosas’ dedication to the business. “He’s a really hard worker,” says Pacis. “The owner gave this restaurant to him and they aren’t even related. That is how you know he works hard. He earned it.”

Since then, the restaurant has been very successful. But as time passed, Rosas wanted to put his own twist on this traditional American diner.

In 2011, he decided to change the Turf to Ludi’s. Ludi was Rosas’ mother’s best friend growing up—and his informal foster parent from first to sixth grade.

“Ludi had the means to board and feed me,” he said. “That is why I honor her. Because of the good teachings and skills I learned from her. Our relationship was not so much about love, but she taught me how to survive. She taught me how to live without a mom.”

A little piece of the Philippines

By offering both food options, Ludi’s encourages customers to branch out and exposes them to a small piece of Filipino culture.

“I grew up with a pretty diverse food culture. We would always go out for Indian food or Chinese,” says Emma Larkins, a first-time Ludi’s customer.

“I have never had anything like this,” she says while eating her garlic fried rice. “It’s a unique flavor profile, and it’s breakfast.”

Rosas even shares samples with new customers who have never tried Filipino food.

“Sometimes people are scared to order new foods,” Rosas says. “So, I give them a little of this and a little of that and they like it. They order more.”

In Filipino culture, food is connected to friendship, family, and community.

“We express ourselves through food in so many ways,” says Alexa Rio Osaki, grand-goddaughter of the founders of the Filipino American National Historic Society. “It’s how we show love for our family and for ourselves. By sharing food with others, we regain a sense of self.”

It is not only food that Rosas is eager to share. He even prints a “Tagalog slang” section on the menu to show customers common meal-time phrases.

“People are always curious about how to pronounce things,” says Pacis. “People ask how to use the slang, and when they see it on the menu, they use it. They tell us our food is ‘masarap.’” In other words, “tasty.”
Rosas hopes that his culinary work exposes people to a new language and type of cuisine.

“Now we get a lot of Filipinos bringing in their American friends. You hear them say ‘Let me try that. I want to try that,’” he says. “I think it’s a place for everybody. You win many cultures.”