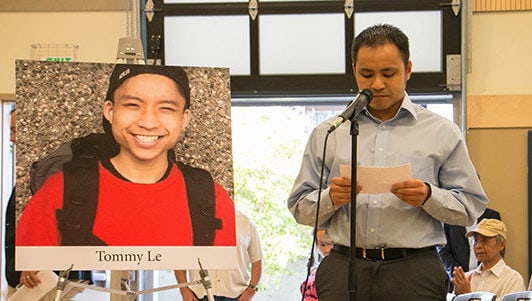 On Tuesday the county Office of Law Enforcement Oversight (OLEO) called on the King County Sheriff’s Department to improve its policies for communicating with the media and the public, including correcting false information.

A new 33-page report commissioned by the OLEO director describes how the sheriff’s office spread false information after Le was killed. The 33-page report, written by the University of Florida’s Brechner Center for Freedom of Information, also issues recommendations for how the sheriff’s office can improve its transparency and the way it shares information with the media and public. The recommendations include proactively sharing information about officer involved shootings, regularly disclosing information on social media, and admitting when false information is released and quickly correcting and retracting it. It also includes disseminating information to communities that might not speak English as their first language.

The report was presented to the King County Council’s Law and Justice Committee on Tuesday.

The recommendations in the report are basic but can make a big difference, said Deborah Jacobs, director of the OLEO, especially for families of someone injured or killed by a member of the sheriff’s office. “It’s very painful to see the press talk about these things, especially if they’re inaccurate,” Jacobs said.

Recommendations such as making sure the media has access to up to date information might seem basic, Jacobs said, but “it has not been the practice” from the sheriff’s office.

The original version of the report was redacted to remove a section about Le’s shooting. The Seattle Times obtained the unredacted version, which can be read here.

As the International Examiner reported in April, the sheriff’s office has undergone staffing changes and introduced less lethal weapons into existing policy in order to prevent another shooting.