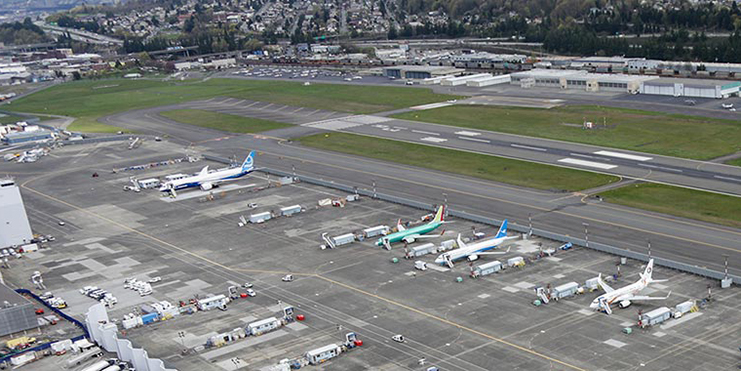 Despite King County’s status as a sanctuary county for undocumented immigrants and refugees, a new study from the University of Washington Center for Human Rights shows that the King County International Airport (or Boeing Field) has been a hub for deportation flights, with 34,400 deportees flown out of the airport between 2010 and 2018.

Now, King County aims to be the first jurisdiction in the nation to stop these flights, though it is unclear how this will work.

The study, titled “Hidden in Plain Sight: ICE Air and the Machinery of Mass Deportation,” found that an average of 360 people per month are sent on deportation flights out Boeing Field, despite King County’s status as a sanctuary jurisdiction. “Under the Trump administration, the numbers are again trending upward, though they have yet to match the pace of deportations during the Obama-era peak,” according to the report.

Before the report’s release, King County Executive Dow Constantine signed an executive order on April 23 aiming to end deportation flights out of Boeing Field. The executive order requires that the next time the county signs a long-term lease with a company that operates a hangar or other airport infrastructure such as refueling, the company must comply with local immigration and human rights ordinances. The order also calls for audits of companies involved in deportation, and installation of security cameras at public ramps and other locations.

However, county officials told the Seattle Times they don’t know when the current leases will expire.

The report is drawn from records of 1.73 million passengers on 15,000 deportation flights chartered by ICE nationwide between October 2010 and December 2018. UW researchers obtained ICE’s Alien Repatriation Tracking System (ARTS) through a Freedom of Information Act (FOIA) request. They believe it is the first time any of this data set has been shared with the public.

The report sheds light on the machinery of ICE deportation, based on quantitative analysis of the data set, analysis of other documents, and interviews with immigrant rights advocates, former deportees and families, an employee of the plane company that charters with ICE, and an ICE employee.

It found that 52 percent of those deported between 2010 and 2018 in the nationwide dataset had no criminal record.

According to the report, there is evidence in the dataset that ICE deports people with fake travel documents or none at all, which is against ICE’s own policy.

According to the report, most of those deported are Mexican or Central American, but there has been an increase in deportations from other communities in King County, including Somali and Cambodian. Deportees, some of them minors, have been sent from Boeing Field to dangerous destinations, including places people came as refugees from wars fueled by the U.S., the report notes.

The report notes alleged abuse on deportation flights from Boeing Field. A Salvadoran man reported guards shoving deportees before boarding the plane, calling them “scum” and accusing them of stealing jobs.

People deported from King County were also on a 2017 failed deportation flight from El Paso to Somalia, where passengers said they were “beaten, kicked, threatened, denied access to the bathroom, and placed in full-body restraints,” according to the report. In 2017, seven passengers filed a class action lawsuit after the flight.

It’s unclear how common such abuse is, the report said, and is likely underreported. Regardless, such deportations “separate families, amplify the impacts of racial disproportionalities in policing, and may remand people to unsafe places.”

In his executive order, Constantine said he became aware of the deportation flights in June 2018. But King County officials told UW researchers they were powerless to stop the flights due to federal obligations of Boeing Field. When the federal government transferred ownership of the airport to King County, it came with the stipulation that federal authorities could make use of it, as do federal grants the County receives for airport improvements.

In February 2018 King County passed an ordinance, praised as groundbreaking at the time, that limits collaboration of county officials and immigration enforcement authorities, and provides legal funds for immigrants facing deportation.

The report suggests that legally, the County does have the power to do more to defend immigrants against deportation, citing the 10th Amendment to the U.S. Constitution, Attorney General Bob Ferguson’s 2017 guidance around immigration enforcement, and the state Constitution, which give local governments “the discretion to decide to what extent they will assist the federal government in the enforcement of federal laws, including federal immigration laws.”

“If our county airport continues to facilitate the mass deportation of members of our immigrant communities, its proclamations ring hollow,” the report says.