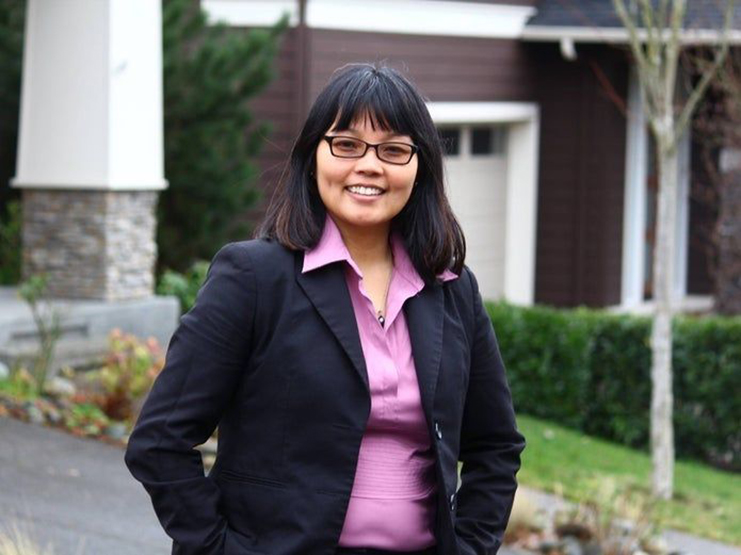 Kim-Khanh Van, an immigration attorney and member of the Renton City Council, is running for a seat on the Metropolitan King County Council in Position 9, which includes south Bellevue, parts of Kent, Renton, Newcastle, Covington, Maple Valley, Enumclaw and unincorporated communities.

Van, a Democrat, was elected to a four-year term on the Renton City Council in 2019. So far, she has been endorsed by Port Commissioner Sam Cho and former County Councilmember Larry Gossett.

She decided to run against 15-year incumbent King County Councilmember Reagan Dunn (a Republican) for the seat because she believed he has become increasingly disconnected from the needs of the diverse district, and his responses to homelessness and housing affordability have been inadequate.

The district’s challenges were starkly outlined by the COVID-19 pandemic, Van said, and Dunn didn’t do enough to protect communities against hate and bias at the start of the pandemic, or address racial profiling of Black and Latinx community members, especially after the murder of George Floyd in May 2020, and subsequent reckonings with racial injustice.

“It wasn’t his priority to address racism,” she said. “At least for me, I have owned my privilege.”

Van said the model minority myth has given her a helping hand that Black, Latinx and Native American communities typically don’t receive.

Van was born in Vietnam. When she was six, her mother and siblings fled to a refugee camp in the Philippines. It offered little relief, with barbed wire, barking dogs, and “cruel guardsmen” who would “terrorize” them, Van described it in the biography section of her campaign website.

“Each week, we were given just two and a half pounds of rice and some canned foods to feed the entire family – we struggled and we subsisted – but not without hope,” according to Van’s website.

The family was able to leave the camp after they were sponsored by a church in King County.

The family’s sponsor gave them three months to adjust, Van said, and then they were on their own. Van and her siblings were raised in public housing by a single mother, who rode three buses to get to work. Van frequently served as the family’s translator between Vietnamese and English.

Van’s interest in public service began when she was in fourth grade, and met Washington Senator Patty Murray, famously known as a “mom in tennis shoes.” Seeing Murray, a mother and powerful political figure, speak at her school was inspiring. “You don’t see that in Vietnam,” Van said.

In addition to being a Renton City Councilmember, Van works as an immigration attorney, and has helped clients get Green Cards. She came to believe that making change on a systemic level could be more powerful, because it could provide opportunities, resources and representation to a broader community. Van sees this public service as a way of paying it forward.

Her top priority, if she is elected, is “making sure that the American dream is still accessible and possible after COVID-19.” This involves economic recovery and helping small businesses. She also wants to find solutions for homelessness, and public safety and police accountability.

She wants to address the systemically racist impacts of the pandemic, which has disproportionately claimed Black, Latinx, Native American and Pacific Islander lives in the County.

She believes she has the experience needed to grow working-class coalitions, and base policies off these relationships. She intends to listen to anyone’s ideas and solutions, even when they have disagreements. “You can’t have my way or the highway, especially during a pandemic,” she said.

Homelessness is growing during the pandemic, and Van wants Seattle and its suburbs to take a more collaborative approach to addressing the problem.

Van had a front-row view of how the regional efforts to address homelessness have been tested recently.

In mid-December, the Renton City Council approved new emergency zoning laws that will result in the eviction of over 200 homeless people who have been living in Renton’s Red Lion hotel. Seattle’s Downtown Emergency Services Center moved the residents there during the pandemic to prevent crowding at Seattle shelters.

Van was one of two Councilmembers to vote against the measure, which advocates say will make it difficult for shelters and other homelessness services to operate in Renton at all.

Van said she doesn’t have all the answers to solving homelessness. But she knows what doesn’t work. “There is no way that I’m going to put folks out on the street,” she said.

When it comes to solutions for people living outdoors, Van said: “Get them them off the streets. Get me out of the refugee camp — that’s kind of the mindset, because we really thought we would have died there.”

On criminal justice reform, Van is in favor of two charter amendments King County voters passed in November, which make the King County Sheriff’s position an appointed one rather than an elected position, and that allow the Council to limit the Sheriff’s power. A goal of the amendments is to change the public safety model, and have 911 responders include social workers and mental health specialists rather than just armed officers.

These measures are a start, Van said — more should be done to transform juvenile justice, and incorporate community solutions into the justice system.

Van said she favors a “practical” approach to reform at the Sheriff’s Office — she doesn’t want to see delayed 911 response times, for example. It is the only law enforcement that people in unincorporated parts of District 9 can rely on for public safety, she said.

Van believes the County Council’s successes in recent years have been equity and social justice initiatives, making sure information is available in multiple languages, and a regional approach to transportation and homelessness.

The County could do a better job connecting communities with transportation, and supporting small businesses during the pandemic, as well as making sure communities know what the County can do for them.

If elected, Van would join Councilmember Girmay Zahilay as the second person of color currently serving on the King County Council. She would be the second Asian American woman on the Council since the late Ruby Chow, who finished her term in the mid-80s.

To serve on the Council, and ensure the diverse Asian Pacific Islander American community has a voice there, Van said, would be a great responsibility and an honor.