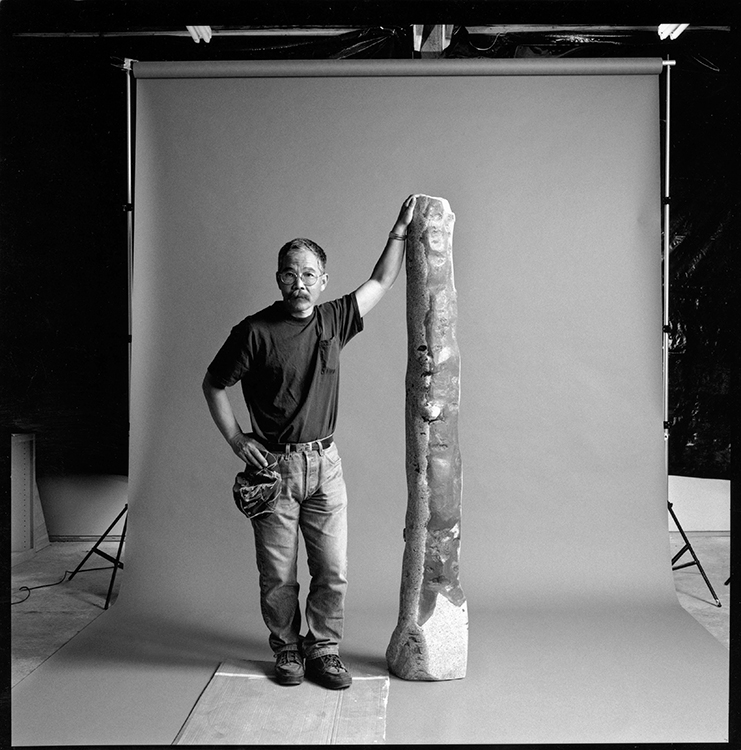 Michihiro Kosuge, a highly respected Northwest sculptor died in October, 2021. He was 78. For many years he was a teacher and art department chair at Portland State University. He came to the United States in 1967 to attend San Francisco Art Institute and eventually made his way up to the Northwest. He worked largely in stone creating public and private works. He was represented by Russo Lee Gallery. His good friend and fellow artist Robert Dozono has written this remembrance of him. ~ Alan Chong Lau, IE Arts Editor

Once a month for 10 years, Michihiro Kosuge, Kanetaka Ikeda and I lunched at a local Chinese restaurant and talked about our harsh childhoods in Japan and our experiences learning and trying to become artists in this country. Two sculptors and a painter.

Since I was the oldest, as a joke Michi and Kane called me Oniisan (honorable older brother). As an honorable older brother, I always ordered our food and paid exactly half the time. With Michi gone, our intimate lunch gatherings will not happen in the same way again. Michi was like a brother to me; we celebrated birthdays, ate traditional Japanese New Year food, and kept the Japanese in us alive. After these lunches, we would say good-bye, often with a light hug, like our artist friends. We never shook hands.

On October 13th, what turned out to be his last day, Michi and I ate lunch together. Every week for a year since his move to an adult foster home, I brought him Japanese food (much of it cooked by my wife Noriko), and we ate lunch together. That day we ate Matsutake Gohan, green beans with chanterelle mushrooms; and for dessert, Anpan. His two favorite Japanese foods. He ate well for a change and asked for seconds on Matsutake Gohan. We ate quietly together. He had not been talking much lately anyway. It was very pleasant, sitting and eating in each other’s company. When I was close to leaving, he extended his hand, and we shook hands. I left the room for a short time and when I returned, he extended his hand to shake mine for a second time. It was the last time we would see each other.

In 1975 my colleague and friend Ken Weeks and I were in our office at Portland Community College. I don’t remember what we were talking about, but we were having a long conversation about an artist.

We saw a person sitting in a chair nearby, and when we noticed, we said “Can we help you?” And he said, “No it’s okay, I was just listening to you talking.”

I was not sure who he was or what his background was. He was very dark from being outside so much, which we found out when he laughingly told us he was working as a Japanese gardener. He showed us photographs of his sculptures and told us he was looking for work. He shared that he had graduated from the San Francisco Art Institute. His work looked so interesting that we arranged for him to give a talk in the Small Theater in our building. Michi was so funny when he gave his talk; I was amazed he could communicate so well in his slightly broken English. Looking at the audience, I could tell everyone was enjoying his stories and his work. He really knew how to capture an audience with his straight talk and sense of humor.

Michihiro Kosuge grew up in Shita-machi (the real old downtown), Tokyo during and after the second World War. He told me that he decided at an early age that he would not fit into restrictive Japanese society. After high school, he left Japan for the United States, despite the facts that he didn’t speak English language or know anyone there. He tried to learn English at the University of Berkeley where other Japanese students were also learning English. His Japanese classmates told him he should stay longer at Berkeley to improve his English, but he said he didn’t want to waste more time. He left Berkeley to attend the San Francisco Art Institute to become a sculptor. He was not worried about improving his English.

At the Institute, when Masters of Fine Arts (MFA) students were showing their work in the school gallery, he placed his work there too. No one complained, he said. San Francisco Art Institute, as a private school, can make its own rules. Unusually, Michi received an MFA degree without a Bachelor’s degree. I laughed when he told me. I said, “Michi, the Institute wanted to get rid of you, so they gave you an MFA degree instead of a BFA!”

In 1977, Michi worked as an artist-in-school at McNary High School in Salem, Oregon. At the end of his residency he had a show at Bush Barn grounds, and the art instructor at McNary High gave a talk about what an inspiration Michi was to the students. The instructor said that early on one of the students asked Michi: “What is a sculpture?” Instead of explaining, Michi said, “I will show you.” He proceeded to make a sculpture on the spot. The instructor said he was amazed and inspired by Michi’s actions and how he involved and engaged students in art.

Michi started teaching at Portland State University (PSU) in 1978 as a sabbatical replacement for Don Wilson. When Wilson did not return from his sabbatical, Michi became tenured faculty. At PSU Art Department, the salary raises were established by agreement of the faculty. Michi was so popular with students and the department faculty that each year he received the most increases. In a short time, he became the highest paid faculty in the department and became a full professor.

Before my retirement from Portland Community College, I decided to become the chair of the Art Department at the Sylvania Campus. Soon after, Michi became the Chair of the Department at Portland State University. I chose not to be an administrator earlier because of my poor writing skills. I asked Michi how he managed the writing part of being the department chair since I knew both of us were terrible writers. He laughed and said, “I just tell the secretary what to write and she writes for me.” I was always embarrassed for not writing well, but Michi was not embarrassed or concerned at all; he had others to do it for him.

During Michi’s sabbatical year in 1984-85 he became a Visiting Artist at the Chicago Art Institute and we drove his pickup to Chicago together. On that trip, we stopped in Cheyenne, Wyoming. We were walking around town after eating dinner at a local diner and two white girls said, “Go back to where you came from” to us. Living on the West Coast, I had been called names before, so I assumed they saw us as foreigners who they wanted to go back to Japan. Michi and I talked about it later. He thought they saw us as two Indians off the reservation and they wanted us to go back. He thought people in Cheyenne didn’t see Asians and because it was summertime and we were dark so they were just assuming we were Native Americans, not able to tell the difference. He saw the humor. I was insulted.

On that trip, we stopped everywhere to take photographs of silos at farms. He returned from Chicago with many small sculptures based on these silos, which he made with his assistants at the Art Institute. He said it was wonderful to have good assistants, which made it easy to cast many sculptures there.

Next to the large fir tree in our front yard sits the corten steel sculpture Michi made while he was at McNary High school. Nearby sits a low-to-the-ground sculpture like a grid work of windows that he made for the show at Portland Community College gallery, the show Michi and Kanetaka think was Michi’s best show – the steel, rock and sand working together on the floor of the Northview Gallery.

Next to the window in our living room is Michi’s steel and marble sculpture from his first show at Blackfish gallery in 1979. The piece was also at the Bruce Guenther curated show at Seattle Art Museum for Oregon and Washington artists in 1980 alongside the work of my friends Michael Spafford and Ross Coates. Michihiro Kosuge is still alive in our yard and our home.

After my last lunch with Michi, Noriko and I went chanterelle hunting near his studio. I told Noriko about Michi shaking hands with me because it was so out of the ordinary for us. It was so odd to me that Michi wanted to shake my hands. We never shook hands. Michi was a mystery to me even after 46 years of friendship. His way of doing things was always quite different from mine. I never expected him to pass away after our lunch. Somehow, like so many times before, he had an intuition; he knew what he was doing.