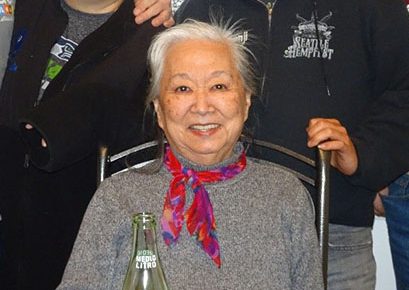 A giant has decided that it was time to rest.

Memorable from the moment you met her, Mako was well known for her big laugh, her strong opinions and her warm smile.

Mako was born in Seattle as the third of four daughters to Hisako and Masao Takahashi. To learn more about her childhood, read her memoir Child Prisoner in which she shares her memories of growing up in the American Concentration Camps. This tragedy of American history helped her to become a social justice warrior. She would often tell of the irony of learning the Pledge of Allegiance as a small child while incarcerated behind barbed wire.

Her career took her down different roads but she found her love for helping others learn. She started as a teacher. She co-developed and later was the Director of the Rainbow Program teaching multiculturalism “beyond Tacos on Tuesday and Fried Rice on Fridays”. She later became a Principal, then worked as a Multicultural Specialist for the Office of the Superintendent of Public Instruction before starting her own business, Mako & Associates, doing educational consulting. She was pleased when her daughter joined the company which led to a highlight of their co-facilitating a training together!

At the beginning of each academic year that she served as a Principal for the Seattle School District, Mako would spend hours with photos of all students so she would be able to say hello to each of them in the hallway. Knowing people was important to her and she worked hard to let them know that.

She also strongly believed in helping people protect their civil rights so was very involved in community organizations. She served many roles in the Japanese American Citizen’s League (JACL) including chapter President and working with the national board. One of her many highlights was achieving Redress for people who were imprisoned during World War II and who lost jobs, property and loved ones. She was also dedicated to the Densho Project, the Minidoka Pilgrimage and The Power of Words. She was fond of saying “We are one, we are one, we are one. We are all part of the same race – the HUMAN race!”

Mako was an amazing cook and loved to share food with the people she cared about. She loved Coca-Cola, sour cream and onion potato chips, and her sister’s homemade sembe. She loved Seattle sports teams – especially the Seahawks! She loved spending hours studying at the library. This “code” started when her father would tell her mother that he was at the “library” to keep her from getting angry that he was actually at the casino. Mako continued this story as a tribute to “Papu” – her father. She also loved to travel and she loved to enjoy the company of her big family and many friends.

The people who loved her most surrounded her as she decided to rest.

She is survived by her children, Daren, Bradly Kenji and DeeAn (Ryan Cukierman); her sisters Kazzie Katayama (Mits), Nobie Takahashi and Midori Akagi (Don) as well as a giant community of other family and friends.

You have earned to rest peacefully after a lifetime of helping others. We will always love and miss you.