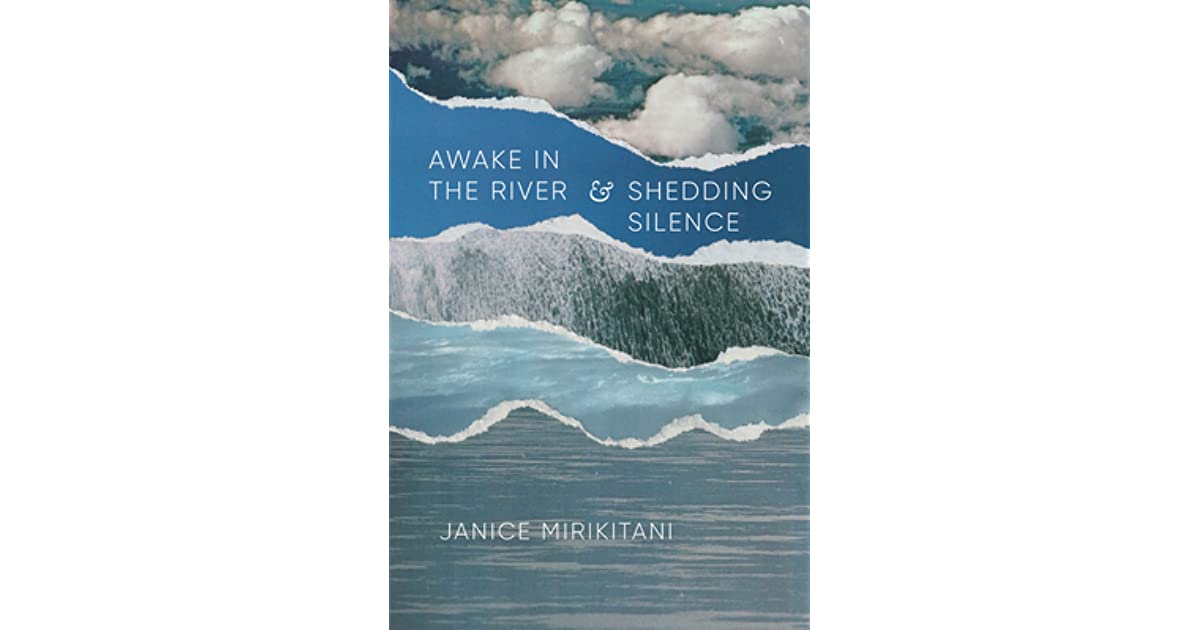 Janice Mirikitani, former poet-laureate of San Francisco, community activist, leader, poet and editor died recently in San Francisco. She will be remembered for her outspoken poems on the Japanese American experience, identity, ethnic stereotypes and the subjugation of women. In partnership with her husband, the Reverend Cecil Williams, she served as co-founder and founding president of the Glide Foundation, a non-profit that served San Francisco’s poor and marginalized communities. During the early days of the Third World Student strike for ethnic studies at San Francisco State in the late 60s, many of us looked up to Janice as a strong sister-in-struggle, her poems providing words of power, inspiration and comfort. In the following pages, her friends from those days – Paul Yamazaki and Russell Leong – pay tribute to her life and accomplishments.
~ Alan Chong Lau, IE arts editor

The poet June Jordan said of Janice Mirikitani, “I regard Janice as a completely distinguished American poet, period. She does what every great poet sets out to do, which is tell the truth. And she’s spawned many other poets and fostered voices beyond poetry through her leadership at Glide. Janice is the one living angel I know.”

Jordan beautifully summarizes Janice’s illuminating impact on so many lives. I would like to focus on Jordan’s phrase, “fostered voices.” Janice had an unusual capacity for empathy. She is adept in taking the particular and finding a universal meaning. Janice demonstrated this ability to “foster voices” at AAPA (Asian American Political Alliance) meetings during the latter days of San Francisco State Strike in the winter of 1970.

AION, credited by many scholars as the first Asian American literary journal in post second world war America, was edited by Mirikitani and Francis Oka. Only two numbers of AION were published. Francis Oka was killed in a motorcycle accident. The second and last issue is dedicated to Francis.

But the reverberations from those issues can still be felt.  An incomplete list of contributors includes Toshio Mori, Lawson Inada, Al Robles, Alan Lau, George Leong, Neil Gotanda, Janice Mirikitani and Francis Oka. AION, in my estimation, is one of the cornerstones of Third World Communications, a collective of writers and artists of color. 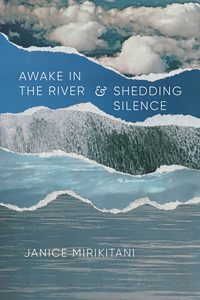 In the next decade Janice edited groundbreaking anthologies including THIRD WORLD WOMEN 1972, TIME TO GREEZ: Incantations of the third world, 1975. and AYUMI, a Japanese American anthology, 1980. These anthologies as well as her own volumes of poetry, beginning with Awake in the River, 1978 and followed by Shedding Silence, 1987, We the Dangerous, 1995, Love Works, 2002, Out of the Dust, 2014, as well as her political and social activism has inspired generations of writers, editors and readers.

The University of Washington Press announced that it will be publishing a new edition of Janice’s first two books in one volume in December 2021. This new edition of Awake in the River and Shedding Silence which have been out of print for many years will introduce Janice Mirikitani’s poetry to new generations of readers.

There can be no more fitting closing than Maya Angelou’s praise, “A major poet in America, Janice Mirikitani speaks all our truths.”

This note is 50 years and a day late; my sincere apologies. Yet I hope, somehow, it reaches you.

You were always the beautiful (and you knew it!), passionate and visionary poet way back then.

Was it 1972, on a foggy night at UC Berkeley’s Zellerbach Hall? It was also the 29th of January. We all had long black hair and brown skin. Green army flak jackets, skinny bodies and loud voices. Filipino Igorot dances, Chinese music and Japanese mask dance. Filipino. Chinese. Japanese—the first reading of poets of the New Asian Nation. The term—new Asian nation—reflected the political thrusts of the times, including the movement by some Blacks towards establishing a “Black Nation,” and the call for a “United Front of Asians in America” by community activists. Some called the evening a celebration of Asian cultural and spiritual nationalism.

And you, Janice Mirikitani. I remember Lawson asked if you would prefer reading before him, because, as everyone knew, anyone who read after him—the main male show—would surely be eclipsed.

That night, collectively, we called ourselves “The New Asian Nation”. Within this nation of S.F. Bay area students, activists and poets, you taught us poise, pitch, and how to make poetry matter even more. We believed in poetry FROM the people, and poetry FOR the people. First People, first Poetry.

The Word, like a torch, would always light the world, so we believed. 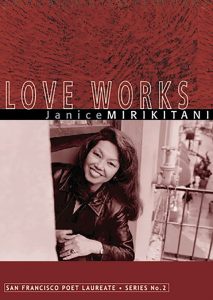 Who and what did you write about in your books of poetry? Their titles are mini-koans in themselves: “Awake in the River.” “ Shedding Silence.” “We the Dangerous.” “Love Works.” “ Out of the Dust.”

You wrote about Love and Death. Lineage and Displacement. Mothers and grandmothers. Husbands and daughters. The raw and the eaten. The free and the addicted. The awkwardness of sexuality. The cruelty of patriarchy. The oppression of sexism. Straight and gay and partnered and single and every other between.

Through decades, your pen and voluminous notebooks precisely documented war and peace and Internment, on dusty Midwest plains below shadowy mountains, as well as the onerous, stubborn prison of the mind.

In “Loving from Vietnam to Zimbabwe,” you pitched the intensity of lovemaking against the violence of war, in alternating stanzas. You contrast crimson and silk with boots and delta mud; a massage freely given with the capturing and stripping of a soldier. You end that poem with:

loving in this world

is the sliver splinter edge

in the teeth of the tiger

the pain of jungle rot

the horror of flesh unsealed

the danger of surviving.

From the birth of the new Asian nation, onwards to today, many of us continued to read with you at protests and rallies and churches—be it for World AIDS Day, to raise money for a shelter, or to abolish militia killings in Central America. And, we continued to publish, via the Kearny Street Writers Workshop, Third World Communications, the UCLA Asian American Studies Center, The University of Hawaii Press, etc., and through chapbooks, broadsides, and anthologies. Only blocks away from City Lights and Lawrence Ferlingetti, yet, the denizens and writers of “The New Asian Nation” scattered about San Francisco Chinatown, the Tenderloin, the Mission, seemed 10,000 miles away from white male writers like Gary Snyder and others who had “discovered” Zen, the East, Buddhism, Taoism, and so forth on temple pilgrimages to Kyoto, Katmandu, or in ashrams in India, and through their fine translations of ancient texts.

Asian American writers on the other hand—like yourself, born in a Japanese American Internment camp, or our brother Al Robles, who had worked and lived between the International Hotel (Filipino town) and Chinatown—had nothing too fancy or esoteric to uncover for a curious world.

Like Native Americans say to the colonizers and anthropologists: “You did not discover us, we were always here.” Here, because, life for you—and for us Asian Americans—was plenty complex and challenging enough already.

For you, watching your grandmother slice fresh rock cod, “Preparing Fish is a Political Act” (the title of my homage to your poetry), the truth of life revealed itself in every movement of the family and community around you—the creators, the cooks, waiters, cleaners, the hungry, the homeless, those women and men often of color evicted from the mainstream.

Sure, Zen and Buddhism and Taoism existed, but not always in books, in academia, in exotic locales. Japanese American Internment camps of World War II from Manzanar to Rohwer were “empty” and exotic enough to ponder for a lifetime. At that time, we kept any threads of Asian spirituality closeted, so as not to become Orientalist curiosities for the world. Sure, a typical Zen koan and a tap on a bald pate could bring enlightenment, but a simple meal for a homeless person in San Francisco’s Tenderloin could immediately fill the belly and bring peace of mind.

Jan, you recognized the innate truth of survival on the broken streets around the temple of your mind.

Fast forward—50 years later, with your unexpected leaving of this world of Samsara on January 29, 2021, I realize that time has passed, to paraphrase lines of the Diamond Sutra, as quickly as a drop of dew, a flash of lightning, a bubble, a dream.

So I’m right behind you, Jan, and I can sense the cool Pacific mist, picking up the fresh scent of redwood and carrying the murmur of lost Asian souls who were incarcerated on Angel Island in the last century.

I touch the green clay incense holder you had bought me from Kyoto, after visiting many small shops, you said. Tomorrow, I promised myself to bring it out to the garden and light incense in your memory, and to honor your word. (After we published your newer collected works in a book, “Out of the Dust” —University of Hawaii Press—you received still more invitations to read and talk in Japan, and you took your daughter, I remember, to revisit. By this time, you had already been named as a second poet laureate of San Francisco. Jan—you were a luminous force of nature whose literary passion had matured, but never faltered or forgotten the rest of us.

Yet, your throaty contralto voice and humor also saved many a day, even in dire lockdown times.

We are the concubines of Covid

Our breath goes up and down

As red lanterns are raised or lowered

In the air, sound of soldiers on dusty streets

Have they come to rescue or to remove us?

Part of your response to me, here:

What a year. Cecil and I have been in lockdown for 10 months. It’s time to have the baby. It’s been rough and wearing, but have to count our blessings, working with those who are losing homes and in dire need of food for their families.

Glide is working harder than ever, having become mobile in our services and delivery of food and testing still for Hep C and HIV and syphilis—especially rising cases now among women of color….

And Yes, on a global scale. COVID has just raised our consciousness about how inhumane our societies are, and yes, I believe COVID is a natural response to our neglect and destruction of the planet and one another….

Jan—as I said at the beginning of this note—I’m a day late, Asian time. Apologies.

Anyway, anyhow, thank you again for helping us create and birth and breathe the New Asian Nation way back when.

For your compassion and kindness, we are grateful.

We know your poetry—when we are “awake in the river”, and recite your poetry, “shedding silence.”

Your brother who keeps his Word,
Russell Leong