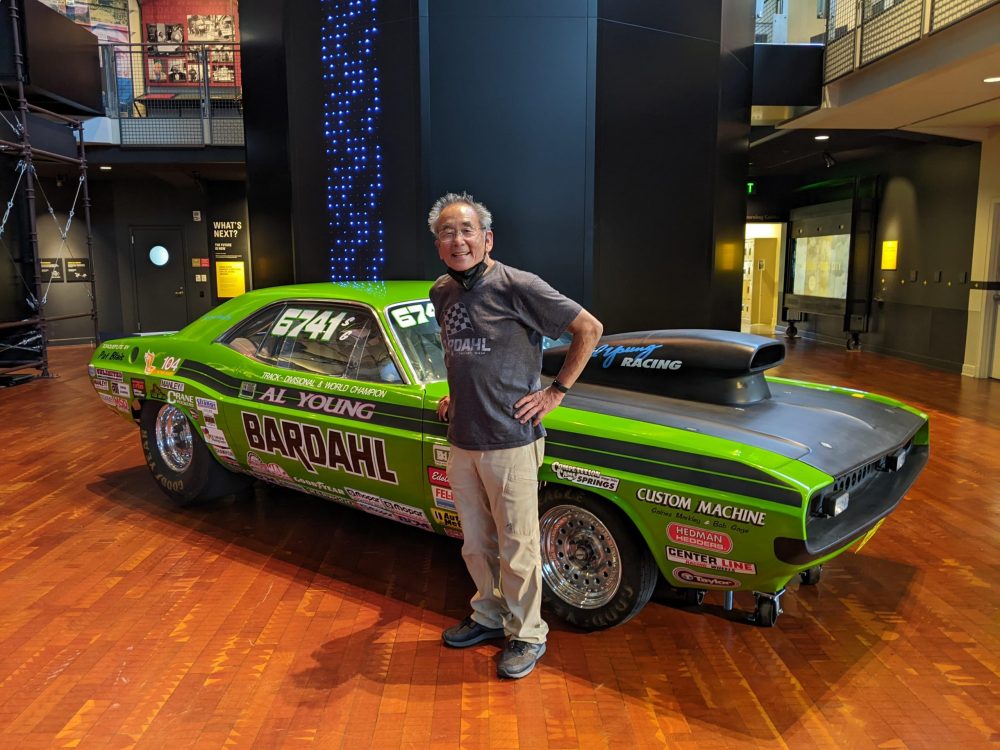 Al Young passed away on Sunday, December 11, 2022, after complications from triple bypass heart surgery. Though he is likely best known as the first Asian American race car driver in history, he will be remembered as a teacher, father, and friend who impacted the lives of countless people.

I was a graduate student in museum studies at The University of Washington when MOHAI’s former chief historian Lorraine McConaghey handed me several tapes containing Al’s oral history. Al had donated his 1970 Dodge Challenger race car to MOHAI in 2007. As part of capturing the story of that object, the museum recorded hours of oral history footage with Al. As I transcribed those tapes, I first came to know Al and his story. We became friends later.

Al Young broke the mold of the model minority in more ways than one. He grew up in the San Francisco Bay area and showed early promise in the sciences. The Lux Lab, a federally funded science-focused after school initiative for gifted children, tapped Al for their program. At the lab, Al learned to build radios and other things. But in middle school, Al struggled with hyperactivity and attention deficit disorder, which weren’t widely known disorders at that time. He was evaluated by his teachers and moved into classes for low-achieving students. In high school, Al came close to flunking out with a 1.6 grade point average, though he excelled in the industrial arts. Al’s father found him an apprenticeship at a foreign car repair shop. He saved up his first fifty dollars from that job and bought his first car.

Al graduated from George Washington High School just as the draft for Viet Nam was ramping up. He enrolled in summer school at Stanford University where he took classes in philosophy, psychology, and sociology. At Stanford, Al realized that he needed to leave San Francisco to reinvent himself and focus on his studies. He looked at a map of Washington State and found the town of Longview. He picked up and moved to Longview to study at the local community college. Initially, he struggled with keeping up with his coursework, but learned that he could trick his body into focusing by walking and reading at the same time. After many long walks around Lake Sacajawea, his studies paid off. His grades allowed him to transfer to the University of Washington (UW). By the time he went off to college, Al had already owned 14 or 15 cars that he had learned to modify to go faster. But during his academic years of study, Al put his love for cars on hold.

Al completed his studies at UW in English Literature in 1972 and became a public-school educator, teaching government, history, and auto shop. His lifelong friend, Shawn Wong, taught alongside Al at Summit K-12 (an alternative school that Al co-founded) in the late 70s. “It was a wonder watching him teach in the high school at Summit. I learned more about teaching in that year and half that I worked there than in all the years of teaching in college,” Shawn said. “Every teenager he taught listened to him, which is no easy feat. He was a mentor to me both in the classroom and in the garage. And a natural teacher who made everything a teaching moment. I never had a brother or sister. And he was like a brother to me.”

During his years as a teacher, Al got back into buying cars and repairing them. After purchasing and fixing up a damaged Dodge Challenger, he started competing on weekends at the drag strips. As a prize for one of his earliest races, he won a check for $12 and a bucket of 16 pieces of fried chicken. As Al won more and more national awards, he got the attention of Bardahl Oil, which became his sponsor. Over the years, he won the American Hot Rod Association Division Championships (1978, 1979, 1983), plus the World Championship multiple times (1978, 1981, 1983).

Though Al’s oral history for MOHAI ended in the year 2007, when he donated his Dodge Challenger to the museum, he continued to make headlines. In 2013, he went head to head with the Tacoma Art Museum over the institution’s attempted deaccession of his parents’ Chinese antiquities collection. Al called me on the phone and asked if I could help to get the word out through the local ethnic media and International Examiner. He mounted a successful public campaign that garnered national attention and resulted in saving a handful of some of his parents’ prized Chinese robes from auction.

Al toured Europe for Bardahl in 2014, driving his vintage Roadrunner car more than 8,000 miles across Europe with his wife Vicki. Al was written up in the New York Times for his journey to the Power Big Meet, an international gathering of muscle cars, where Al took home the Long Distance Award. In 2020, Atlas Obscura featured Al on their Show & Tell series on YouTube. He used that platform to talk about the history of The Golden Spike and his family.

As a trustee of MOHAI, Al joined the deaccessions committee to better understand museum practices and to ensure that diverse voices were represented in institutional decision-making. “At MOHAI, he did so much to influence and encourage that museum in its growth,” said former chief historian Lorraine McConaghey. “He worked hard to do what he wanted to do, what he loved to do, against the pressures of racial prejudice.”

In his most recent years, Al returned to the racetracks at Bremerton Raceway. His friend Shawn Wong starting racing with him again, “just to hang out with Al at the racetrack again and have him teach my son all things car related,” Wong said. “Everyone knew him and loved him.  Even when they lost a race to Al, they’d come up and shake his hand and share a laugh.  It seemed like an honor and privilege to lose a race to the legendary Al Young.”