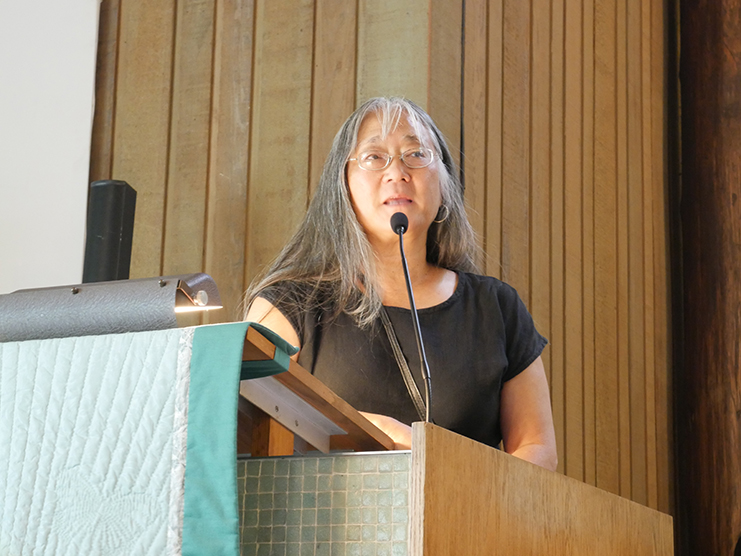 The world lost another warrior for justice. On October 31, 2021, Holly Yasui succumbed to COVID-19 in San Miguel de Allende, Guanajuato, Mexico. She had many talents: filmmaker, playwright, writer and activist. She dedicated decades of her life to preserving the legacy of her father, Minoru “Min” Yasui, a fellow activist and warrior for justice.

Born and raised in Denver, Holly was the youngest of Min and True “Tsuru”, Yasui’s three daughters. She earned degrees from the University of Colorado and the University of Wisconsin. After living in Seattle for a few years, Holly moved to San Miguel de Allende in 1993, where she lived until her untimely passing. She worked and volunteered for various educational and community development organizations, as well as for the Zapatista Peace Camps and the Center for Agricultural Development in Mexico.

Holly was a prolific writer and contributed many articles, essays, book chapters, and even edits to amicus briefs filed on her father’s behalf. She understood the importance of storytelling; of sharing her father’s dedication to civil and human rights; of carrying on so that future generations of leaders could have an Asian American hero. It was her idea to start the Minoru Yasui Tribute Committee, which she co-founded with Peggy Nagae in 2013. The committee successfully nominated Min for a Presidential Medal of Freedom, the highest civilian award in this country, which he received, posthumously, from President Barack Obama in 2015.

Holly also understood that the arts could reach those who might never read an amicus brief or a book about social justice. It was her idea to document Min’s life through her play Unvanquished and in the documentary video Never Give Up: Minoru Yasui and the Fight for Justice. She continued her father’s legacy by working with Peggy and transforming the Minoru Yasui Tribute Committee into the Minoru Yasui Legacy Project (MYLP) to defend civil rights and advance social justice. She regularly spoke out and wrote letters on refugees, detention camps, the anti-Muslim travel ban, and other justice issues.

Holly was last in Seattle in 2016 for a reading of her play, Unvanquished, directed by Jackie Moscou and read by local actors. The event was complete with a 100th birthday cake  for her dad.

Since Holly’s passing, civil rights and social justice groups have paid tribute to her. National Japanese American Citizens League (JACL) executive director David Inoue fondly recalls, “When I first met Holly at a rally in Washington, D.C., she was especially enthusiastic about JACL’s leadership in fighting on behalf of other communities. This was not only her father’s legacy and his strong belief in JACL’s purpose, but she made fighting for justice her own mission.”

Holly lived her daily life with the same commitment as her social justice work. In Seattle, she lived modestly in a rented room in a Fremont house. Given how much she worked from her computer, her “office” was a table attached to the edge of her bed. Long before it was trendy or eco-focused, Holly prided herself on buying recycled clothing at thrift shops and Goodwill. She had her favorite restaurants and nothing intrigued her enough to try new ones. It’s unclear if she ever owned a car.

Holly lived frugally but gave generously of her skills and resources. She was never too busy to help a community organization or movement with writing or editing their important documents. She most recently joined other Yasui family members in volunteering with Tsuru for Solidarity, a Japanese American-led movement to shut down U.S. detention facilities and challenge unjust immigration policies. In the 2019 bio she submitted to them, Holly described herself in the following way:

“…a sansei descendant of prisoners of the Minidoka and Amache WRA camps, also of DoJ detention centers including Fort Missoula, Fort Sill, Camp Livingston and Santa Fe. Since 1993, Holly has lived in Mexico, where she worked for various educational and community development organizations and was an international human rights observer in the Zapatista Campamentos por la Paz (Peace Camps). She has signed on to various amicus briefs filed since 9/11 by the coram nobis team on racial profiling, discriminatory surveillance, guilt by association and the Muslim Ban. She is co-founder of the Minoru Yasui Legacy Project based in Portland, OR and co-director and executive producer of the documentary film Never Give Up! Minoru Yasui and the Fight for Justice.”

Most recently, Holly was scheduled to be a panelist at the University of Oregon School of Law on October 10, 2021. She ironically framed her last written words in the context of racism during the COVID pandemic:

Anti-Asian hostility has a long and ugly history, since Asian immigrants were not allowed to naturalize as U.S. citizens by the Naturalization Act of 1870 (only “free white males” were allowed to become U.S. citizens). Asians were excluded from part of the West Coast, lynched and massacred. Alien Land Laws, passed throughout the western states in the early 1900s, completed the codification of anti-Asian sentiment into law. Min Yasui’s parents were Japanese immigrants who suffered from this discrimination, which was a precursor to the wholesale violation of civil rights represented by the forced removal and imprisonment of Japanese Americans during World War II. Today, Min Yasui would surely stand up and speak out against the anti-Asian hate crimes that have surged in the wake of the COVID pandemic, which irresponsible leaders have called “the Chinese Virus,” “Kung-flu” and other monikers that blame Asians for the worldwide disaster.

In her last messages to family and friends, she thanked us for being an inspiration. Holly, you shall be remembered for your inspiration, dedication and heart — truly Min’s daughter. Rest in power.

Holly Yasui is survived by her partner, Gerardo Armenta Ojeda, her sisters Iris and Laurie, and many friends and relatives. To honor Holly, her family asks that you donate to the Minoru Yasui Legacy Project in her name at https://www.minoruyasuilegacy.org/, or send a check to the Japanese American Museum of Oregon with the notation “for MYLP in honor of Holly Yasui.” JAMO’s address is: 411 NW Flanders Street, Portland, Oregon, 97209.

Peggy Nagae was the lead attorney for Min Yasui’s coram nobis case and is a management consultant based in Portland; Sharon Maeda, currently with the South Seattle Emerald, has been a longtime IE contributor; Mari Hayman, cousin of Holly Yasui, is an editor at HuffPost.