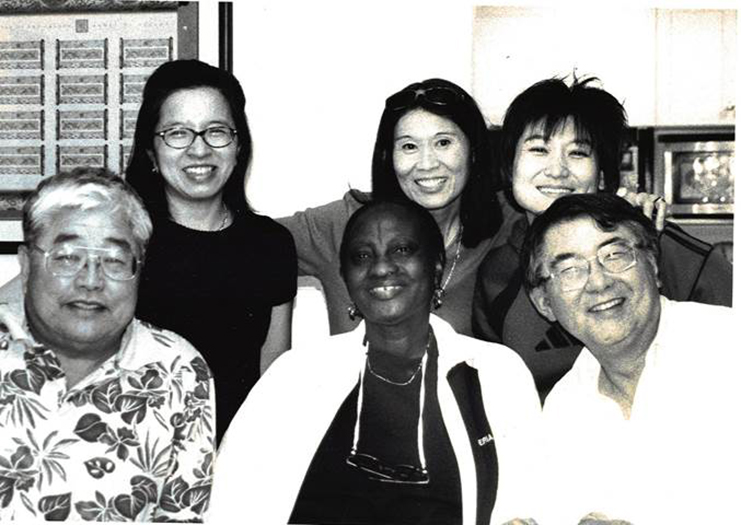 Born in 1940 at the Lahaina Pioneer cannery camp hospital in Maui, Alan lived his boyhood in Lahaina, but moved in 1950 to property his family bought at Kahana Sunset. His father worked hard as a supervisor for Baldwin Pineapple Company. His mother had to live at Kula Sanitarium because she had contracted TB. Alan was raised by his grandparents. Yabui Beach in Maui was named after his grandfather. Alan was also an Eagle Scout.

From the age of 16 to 20, Alan worked summers at Baldwin Packers Pineapple Cannery. He was accepted at Kansas State University in 1957, a year before he graduated Lahainaluna High School and showed an aptitude for agriculture, being honored as “outstanding agricultural student.” He enjoyed learning by doing, not wanting to be stuck in the classroom.

In 1959 he started in the Agricultural and Mechanical College at Kansas State University in Manhattan, Kansas. He was also an assistant football manager for varsity football that year. In 1960, as a sophomore, Alan changed his major to Geography and graduated in August 1962. He went to graduate school at Oregon State University in Corvallis, Oregon. He also attended San Diego State University.

A Lt. Colonel in the United Stated Air Force (retired 1989), he served over 24 years in the Air Force as a commissioned officer. He served in Vietnam (1969-1970) as a radar weapons controller and as an air defense staff officer at the Tactical Air Control Center (TACC). Alan also performed military duties in Alaska, Kansas, Iowa, Montana and Arizona as a weapon’s controller and strategic missile staff officer. As the commander (1982-84) of the 570th Strategic Missile Squadron, he helped to successfully deactivate 18 Titan II strategic missiles at Davis-Monthan AFB, Arizona (1983-1984). Says Michael Yaguchi, Nisei Veterans Committee (NVC) Commander, “You didn’t apply, you were picked from a small number of eligible lieutenant colonels. Timing is one thing, but to even be on that list is testament to his leadership and skill as a Missileer.” Alan served as the Vice Commander of the Nisei Veterans Committee during 2004-5. He was actively involved in the initial fundraising plans for the NVC Memorial Hall renovation. The fundraising began in late 2005 and the renovation was completed in 2008.

Alan was active on the Seattle JACL Board in the early 2000’s and was First VP in 2004. He also served on the Scholarship Committee. He was very thoughtful and deliberate in his comments during Board meeting. Bill Tashima, former JACL President says, “Alan was a strong supporter of JACL events along with Kiku Hayashi (who passed unexpectedly last fall) always cheerful with a warm welcoming smile.” Alan worked to make the first pilgrimage to Minidoka happen and had a role in the National Endowment for the Humanities grant that funded the Day of Remembrance at Bellevue College in 2007. Louis Watanabe recalls that Alan’s questions about the incarceration of his father’s family at Tule Lake gave Louis the courage to talk openly about the incarceration with his parents.

He taught Geography at the United States Air Force Academy and Speech Communication at Montana State University. He has three masters’ degrees and received his Doctorate in Adult and Higher Education from Montana State University in 1993. Alan started at Bellevue Community College in September 1993 teaching communication and later taught Hawaiian Studies, retiring in 2015. He was an incredibly popular faculty member among all students who saw him as accessible and friendly, but especially among international students who found his intercultural communications course to be a space where they could thrive. Alan’s work in intercultural communications was cited when the college won the national Sen. Paul Simon Award for Campus Internationalization from NAFSA,

Alan was president of the Bellevue College Association of Higher Education (faculty association) for two terms (1997-1999) and Vice President at various times from 1999 through 2012 under Jim Ellinger, Frank Lee, Rosemary Richardson and Doug Brown; Alan also served on the negotiations team throughout the years. Alan loved being involved in the union BCAHE, WEA and NEA as well as Rainier Uniserv. Former BCAHE president Rosemary Richardson said, “He never missed a meeting and absolutely loved to schmooze! He thrived at attending legislative lobbying days and never felt defeated; he was always positive in his outlook.”

Alan was one of the founders of the Bellevue College grassroots leadership Diversity Caucus in 2002 along with Sayumi Irey and Leslie Lum. With Sayumi, he served as its first co-chair. From 2002 to 2006, Diversity Caucus initiatives such as Beyond Diversity training, Courageous Conversations, the American Indian Film Festival, Living Treasures and various working committees led to Bellevue College winning the national Charles Kennedy Equity Award from the Association of Community College Trustees and Minority Access, Inc. naming BC one of only five community colleges in the nation to be the “Nation’s Leading Colleges and Universities Committed to Diversity.” Bellevue College honored Alan by recognizing him as one of the “Exceptional 50” on October 12, 2016 “for exceptional growth and development of the college”.

A Celebration of Life for Dr. Alan Yabui will be held at Bellevue College in the cafeteria (C Building) on April 12, Tuesday at 3:30 to 5:30 pm. For more information contact Leslie Lum, [email protected]