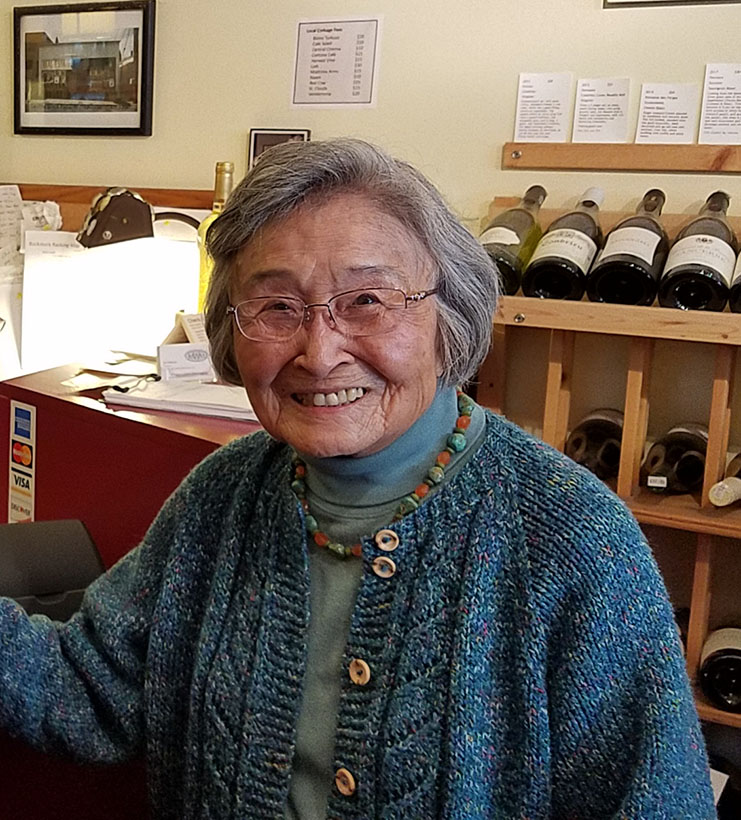 I met Amy in 2008 shortly after she moved to the International District, she would stop by Kobo every now and then to see what we were showing.  As a gallery, we would showcase the work of Japanese and Northwest artisans and artists.  Sometimes it was a printmaking show, an exhibit of Japanese aizome (indigo) textiles or featuring a Japanese potter or the sumi painting by a Shinto monk.  We were honored to be able to exhibit Amy’s work during her years living in the International District.

Amy (Hanada) Nikaitani was born in a small hotel her parents ran in Seattle near 7th and Weller in the International District on October 31, 1923.

Amy moved with her family to Kent, WA as a small child.  She attended Kent schools, graduating from Kent Senior High School in 1941.  After living and raising her children in Seattle for 36 years, she returned to the Kent community for 20 years.  In 2008 at the age of 85, Amy moved back to the International District at 6th and Yesler, only blocks away from where her parents ran a small hotel and where she grew up.

Figure drawing had always been a part of her life.  During high school, drawings of bathing beauties covered notebooks and she used her drawing on stationery to cheer up friends on the battlefronts during World War II.  Amy found that drawing was the medium of choice, bringing much satisfaction.  The figures are sculptural and linear, evoking a feeling of tranquility and beauty to the human figure.

I loved talking to Amy, a nisei of my mom’s generation. There were certain characteristics about Amy that reminded me so much of my own nisei mom who passed away many years before.

She was a straight talker, I don’t know how else to say it.  She was always direct about her opinions about the state of the world, her work, talking about her past and her life with art and her career as a graphic designer for Boeing.  She had a busy weekly routine of playing golf and hitting balls at the Jefferson Park golfing range and playing the ukelele in retirement.  She always walked up and down the steep hill of sixth Avenue and bused everywhere, always declining an offer for a ride home.

She spoke frankly of difficulties of not being recognized by her nisei male peers in the art world although it was a time when all women were overlooked and discounted, and how wartime forced her family to move to Wyoming during evacuation.  I loved Amy for her undaunting determination to live life to the fullest.  She was actively going to life drawing classes with Michelle Kumata until she left us at age 95.  She was spirited and gave all of us who were lucky to come in contact with Amy a chance to see a model for how life should be lived and enjoyed.  I can still hear her voice from our very last phone conversation when she told me she just found out she only had weeks left.  Her voice was strong and unwavering. “There will be a gathering next Friday”, she said.  “I’ll see you there.”