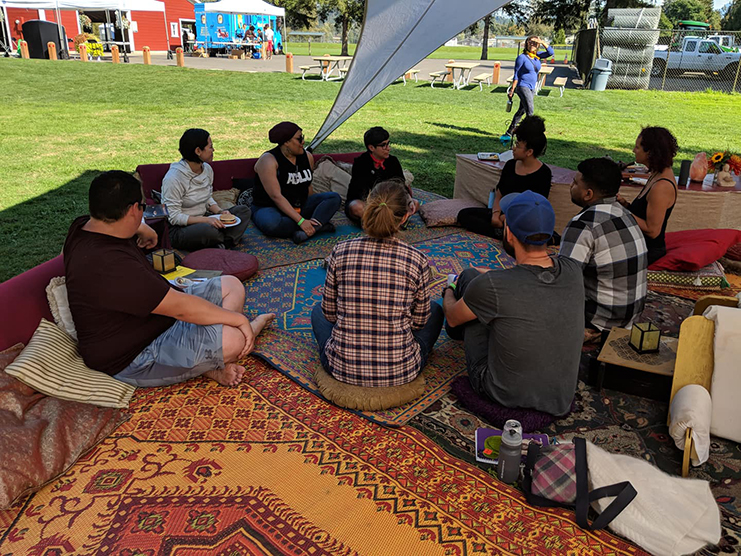 A few years ago, Chevon Powell was in Vermont on her first solo backpacking trip when police pulled her over. In the parking lot of her hotel, the policeman who questioned her purpose for being in the area said it was “unbelievable.” He called for backup and eventually let her go, but from that moment, Chevon, a black woman, realized the need for an accessible, welcoming space for people of color (POC) in the outdoors.

She’d grown up exploring the outdoors long before planning internal events at REI, the outdoor company that had actually funded her trip to Vermont via an Employee Challenge Grant. While working at REI, she fielded many questions from coworkers who thought REI introduced her to the outdoors. They were mistaken. A Camp Janus veteran from Texas whose childhood included extensive outdoor time, Chevon was attracted to the Seattle area because of its easy access to nature.

Ironically, “I’ve only been camping with white people one time,” Chevon, the founder of Refuge Outdoor Festival, told the International Examiner. She will host Refuge, a three-day camping festival for POC and allies, September 27-29 at Tolt-MacDonald Park & Campground in Carnation. Refuge builds community through music, art, outdoor recreation and conversations for a diverse and inclusive audience.

Fulfilling the need for demographic-specific spaces

Sonia Lei, a rock climber, grew up on a woodlot; being outdoors came second nature to her. “I grew up as the only East Asian kid in a predominantly white New England town, and was compelled to assimilate as much as possible to fit in,” she said.

Over time Sonia has come to understand cultural and systemic gatekeeping prevalent in so many areas of American life, including outdoor recreation. When she heard last year about flak the Washington Trails Association received for a Facebook post in support of Refuge (from those who didn’t understand the need for POC-specific spaces), she reflected on her own experiences.

“I don’t think I realized how differently spaces feel when one is neither tokenized, fetishized, nor exoticized. And especially as a woman of color who rock climbs, finding space to be wholly myself, without needing to put up defenses, code switch, or only present a specific persona is incredibly freeing and healing,” Sonia said.

Sonia is volunteering for Refuge and will attend the second festival this month for the first time.

“Refuge is not just about the weekend,” Chevon says. “It’s about prolonged engagement and connecting to resources, and people you can get outdoors with.”

James Hong, who attended the festival last year, has gone bouldering with friends he made there. His experiences outside began from a spontaneous high school camping trip. Now an avid backpacker, he is otherwise an outdoor generalist, dabbling in bouldering, biking, camping, cross-country and snowshoeing. He has noticed that the outdoors is a “whitewashed space — environmental, recreation and conservation — at all levels” and that he’s glad Chevon put Refuge together: “It helps demystify the outdoors so it’s not so uppity for people of color.” In his circle of friends, he says, he is the gear library and planner of camping trips. This role allows him “to bring in joy.”

Refuge is partnering with a number of outdoor organizations, some but not all focused on people of color, to offer festival activities such as outdoor yoga, herbalism for self-care, biking and birding, and hiking. In expanding upon its inclusivity, Chevon hopes more families will attend; plans are in the works for a Refuge Kid Zone this year.

Resonating with others outside of Washington

Chevon says that the concept of Refuge has already resonated with people across the country. Last year, attendees came from as far away from Texas, Colorado and Utah. They included both people who supported her and others who heard about it online, especially through Facebook and Instagram. “One woman from California took an Uber from the airport to the campground last year,” she said. “This year, someone from DC emailed and asked if they should fly in with their camp stove!” (The answer: No, a cooking station is provided.) Registrations this year include attendees coming from the mid-Atlantic, South Carolina, Texas and New York.

Chevon plans to grow the festival from the Seattle area after three years. She’ll look at other areas of the country with high POC concentrations. The Seattle area is lucky. When reminded that the Seattle area is not necessarily one of those places, she agrees, and says, “It’s where I live, so it made sense to start my business here and grow from this baseline of knowledge.” Though she is a veteran in professional event planning, Refuge is her first festival project.

Refuge as a healing space

Though POC like Sonia and James had exposures to the outdoors before adulthood, others like Randon Aea didn’t enjoy wider access until later in life. “Growing up in Hawaii, we didn’t camp because we didn’t have gear, the means, the resources,” Randon says.

As a youth counselor in Seattle, he’d go on random hiking trips due to work. Chevon introduced him to camping with mutual friends starting in 2011. Their annual trips have now evolved into time together at Refuge.

“I can start a fire, cook on a fire, pitch a tent, and prep for a camping trip. I’ve accumulated more gear over the past nine years,” Randon said. “I went to REI recently and realized I didn’t need anything.”

“My mom passed away maybe a month before the festival,” he said. “One of the things that helped me grieve and gave me comfort was being outdoors with community. The community piece was really helpful in helping me heal. I realized the world is bigger than me.”

“The silent disco helped me the most,” he said. “I could be alone with my own thoughts and still be supported by people who care about me. I never knew that the outdoors could be healing.”

For more information on this special outdoor experience, go to www.refugeoutdoorfestival.com.