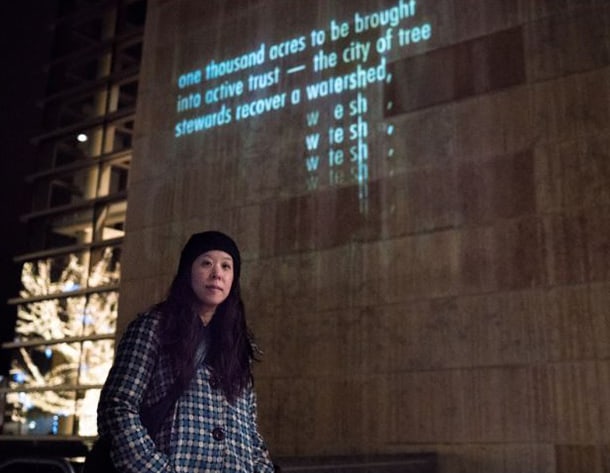 For artist Shin Yu Pai, places carry a tangible relationship to people that words are insufficient to describe.

The city of Redmond’s fourth poet laureate, and the first person of color to receive the honor, Shin Yu said her two-year term was a great opportunity to serve her community.

In some ways, the role was about “looking at poetry as a tool for civic dialogue and engagement,” she said. “For me, this honor has been one that has largely taught me about working with the community in terms of looking at poetry as a form of public art and the sort of approaches that are necessary in order to create that kind of work. So it’s been a very powerful opportunity in terms of letting me test ideas that I had, and doing some bigger projects than I would be able to do on my own.”

Shin Yu received her MFA from the School of the Art Institute of Chicago and an M.A. in Museology from the University of Washington, where she specialized in oral history. She has served as a poet-in-residence for the Seattle Art Museum and was a Stranger Genius Award nominee for literature in 2014.

Her visual art has been exhibited all over the country, including the American Jazz Museum, The International Printer Center, and the Center for Book and Paper Arts at Columbia College Chicago.

Now she can add Redmond City Hall to that list.

Shin Yu’s final work as Redmond’s poet laureate was displayed as part of the Redmond Lights holiday festival on December 2.

The piece, titled “heyday” and created with designer Michael Barakat, celebrates the history of the city’s woodland stewardship, is a video projection that was projected onto the outside of Redmond City Hall.

Shin Yu also has a show of chlorophyll prints on display at the Redmond Senior Center through December 20.

After working with so many mediums, from embroidery to balloons, Shin Yu said it was time to end her poet laureate position with a bang.

Inclusion and tolerance are important themes in her work, and they often address current local events.

Last year, the black owner of a Redmond consignment shop, Leona Coakley-Spring, discovered a Klu-Klux Klan robe and hood left behind by a man dropped off a bag of dresses at her store.

In response, Shin Yu hosted a booth at Redmond’s So Bazaar earlier this summer where she taught visitors how to embroider poetry by Langston Hughes, Stacey-Ann Chin, and textual fragments curated from the city’s Cultural Inclusion Resolution.

For Shin Yu the event was an opportunity to organize a community response to the incident.

“It was a really heavy event that I felt compelled to respond to in some way,” Pai said. “The whole experience really spoke to me. I felt that it was very important to actually embroider that text in fabric to invoke the texture of that actual event and experience.”

Medium matters a great deal in Shin Yu’s work, as illustrated in one of her most recent collaborations, “Animating Archives: Contemporary Chlorophyll Prints.”

Created with artist and photographer Megan Bent, the exhibit explores the natural history of Redmond through a series of chlorophyll prints, each made from native leaves overlaid with black and white photographs of the city’s 19th-century community.

The idea for the project, Shin Yu said, came to her while she was digging through Redmond’s historical archives wanting to better understand the city’s legacy. She came across black and white images of Redmond loggers and mill workers.

“I got this idea that wow, it would be really cool to reproduce these archival images that most people don’t have the opportunity to see or come into contact with,” Shin Yu said. “By overlaying them on plant matter that were sourced or gathered from or around the city of Redmond, so that this history that is invoked through the image could also connect in a concrete way the history of the land and place through the materiality of the plant matter.”

For Shin Yu, photographer Bent’s collaboration worked well because she is a kindred spirit who shared Shin Yu’s passion for visual storytelling.

“We were just really intrigued by each other’s work just in terms of the photographic processes that we were both exploring,” Shin Yu said. “We were very much the kind of individuals to share what those processes are because you can learn them on your own. There was this camaraderie, knowledge sharing, and collegiality.”

Looking ahead into next year, Shin Yu will be working on a manuscript chronicling her many public art and book art projects, including her work for Redmond. The book is slated for fall of 2018.

Update: This piece has been updated to clarify that the visual poem “heyday” was displayed once on December 2 and is no longer on display