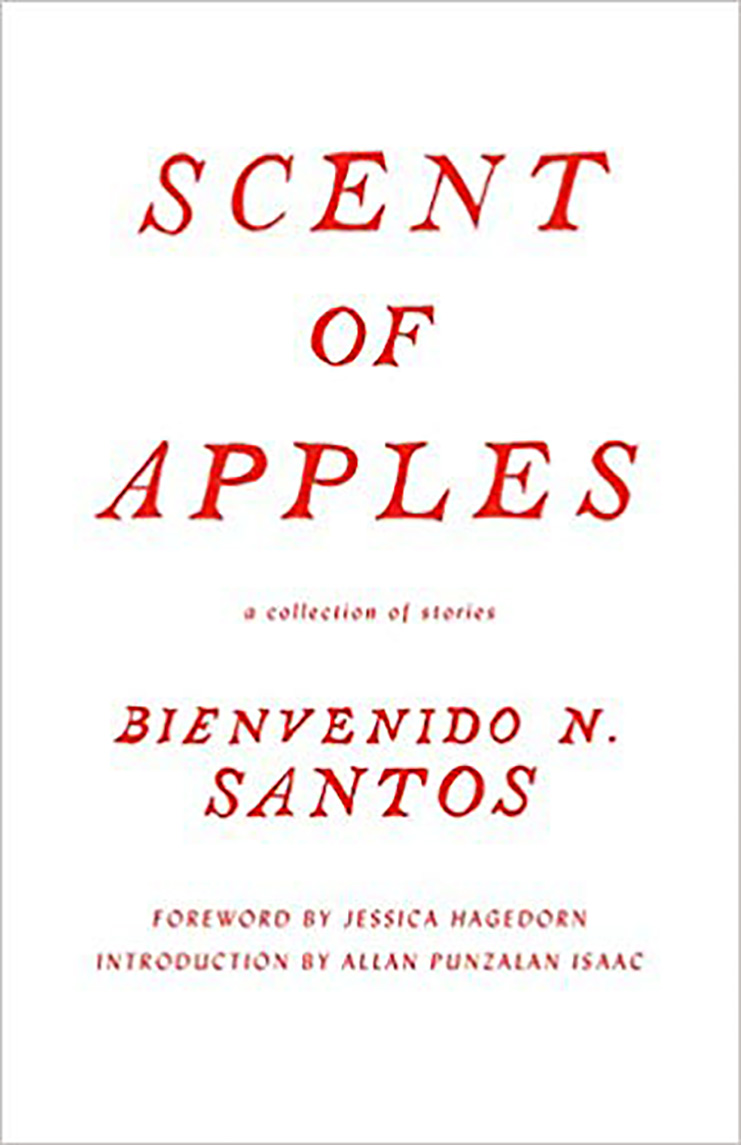 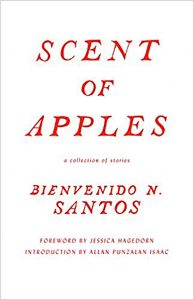 I owe a lot to the late Filipino writer Bienvenido Santos.

For starters, Santos, in his brilliant and evocative collection, Scent of Apples, showed me the beauty of the short story format, the masterful use of subtlety in both narrative and dialogue, and the proper linkage of related stories that in this case created an elegant work of art as satisfying as any well-crafted novel.

But there’s another, more personal reason as well.

As a Pinoy, an American-born son raised on the “manong” stories of my pioneering father and uncles, I had thought that all Pinoys were poor – surely, the ones I knew were. I also thought that Filipino America in the 1940s was geographically limited to the West Coast, with Stockton and Seattle as the epicenters of Filipino American life.

I am also thankful that more than three decades ago, Santos showed me I was wrong on both counts.

Although the first story, Immigration Blues, is set in San Francisco while the last, Footnote to a Laundry List, is set in Manila, these are essentially bookends, well crafted, certainly, but not central to the heart of the collection, which begins with Scent of Apples, featuring Santos as the narrator (“Ben”). He tells the stories of ordinary Filipinos such as the Michigan farmer Celestino Fabia in Scent of Apples and of his bitter soon-to-be inducted cousin Manuel in And Beyond, More Walls.

But he also tells the stories of young Filipinos stranded in Washington, DC, during the war. Most of the young men and women are students at America’s finest universities, sent there by their landed elite and very wealthy Filipino parents. Their goal is to get a degree from a famous U.S. university – a “gold card” credential in the U.S.-centric colonial Philippines. Their parents’ expectation is that they then return, degree and new skills in hand, to help their families run their varied enterprises, and (Santos was far too polite to say so, but I’m not) to exploit poor and desperate Filipinos.

This point does not escape Santos. Starting with The Hurt Men, Santos introduces his readers to Val, Doc, and the other Filipino exiles gathered around a poker table in Washington, D.C. Their banter is light, full of well educated, socially proper bonhomie. Their academic pedigrees (Harvard, Columbia, the University of Chicago) and their wealth are obvious. These young men of privilege are different from their migrant, stoop labor peers in California. Val, for example, has “a light complexion, lighter than any of ours, and arms as he rolled his sleeves, were plump and soft like a girl’s.”

But the men do hurt, and they hurt in different ways and to different degrees because of their separation from their homeland and the carnage, loss, and chaos unleashed by the war, including the wholesale devastation of Manila during the liberation. Readers are also introduced to Ambo, albeit indirectly. Val tells Ben near the end of the story, “You should meet Ambo.”

There is no doubt that Ambo, whose real name is “Pablo,” is the central character in the collection. In a later story, Manila House, Val describes him as “a little elderly Filipino” who during the Great Depression “had a whole household of Filipinos feeding on everything he could give them…He is well loved by the Filipino community.”

High praise, indeed. But then Val adds this backhand caveat: “If he had only been educated, he would have been an articulate leader of our countrymen in this country.”

In the reviews of this collection, much has been made of Santos’ ability to capture the sense of displacement of Val and the other “hurt men,” the bayanihan spirit, etc.

Little has been written about Santos’ unerring ability to stab Filipino elites and their deep hypocrisies.

In that sense, Scent of Apples is, at its core, subversive.

For example, as to Val’s claims that these Filipinos “love” Ambo, the question arises as to whether that affection is genuine, or is it shallow and really based on need. Ambo takes care of them; he gets things done. In the Philippines, rich Filipinos have servants just like Ambo to cater to their every need. Not so, in Washington during the war.

The question is answered in Letter: The Faraway Summer, when Ambo/Pablo pays a visit to his old friend Doc who has established a successful medical practice in Manila. Ambo has returned to the Philippines, but now he has second thoughts. He wants Doc to use his American Embassy connections to get a visa to return to America. Doc greets Ambo coolly and suggests that he write him a letter of introduction to the embassy. After brushing Ambo off, Doc dials his wife or lover – a conversation that Ambo overhears. Doc apologizes for being late, explaining that he was held up “by a man, a Pinoy…I said Pinoy, just one of those Pinoys I had met in the States…” (In writing this line of dialogue denigrating Ambo, Santos has also created a teaching moment. Today, the term “Pinoy” is loosely applied to all Filipinos.

Appropriation, Filipino style, right? But for me, the term, as originally used, had geographic [America], ethnic [Filipino], and working class connotations. It belonged to Ambo and to my father’s and uncles’ generation and to their American-born children. Ahistorical appropriation doesn’t change it.)

In assembling this collection, it is clear that Santos’ favored characters are Pinoys such as Ambo, Celestino Fabia, and Bernie Canlas in The Contender. Bernie is an ex-fighter losing his eyesight; in his despair, he apologizes to other Pinoys for never winning the championship.

Finally, there’s Fil Canlas in The Day the Dancers Came. This old Pinoy’s only wish is to invite the young, pretty, and privileged dancers of a touring national troupe – undoubtedly the acclaimed Bayanihan Philippine National Folk Dance Company – to a homemade dinner in his rundown Chicago apartment. After the performance, he approaches the dancers, but “[t]hey were always moving away.”

Dejected, Fil returns home and describes his encounter to Tony, another old Pinoy and his roommate and friend. “They looked through me. I didn’t exist. Or worse, I was unclean. Basura. Garbage. They were ashamed of me. How could I be Filipino?”

Less favored are characters like Doc and Val, who shows his true colors, his cowardice, his absolute lack of spine, in Quicker With Arrows. In this fascinating story, Val has been dating Fay, a kind and loving working class white woman. For Val the affair should stay a secret because his wealthy parents in the Philippines would disapprove of their son marrying beneath his station. The test comes when Val’s elite Filipino friends come to visit.

Val’s reaction? He asks Fay to stay in the bedroom.

For reviewers who are intimately familiar with the subject matter, there is a tendency to overly focus on political and social themes such as class, so prevalent in Philippine culture. And perhaps that has been the case here. But to focus mainly on this would be to sell Santos, the literary artist, short.

Santos is a short form master, able to merge clear visual narrative with poetic sensibility. Nowhere is this more evident than in the closing paragraph of “Lonely in the Autumn Evening”:

“And when they buried Nanoy, the wind was blowing from the river across the hillock where a group of us stood bareheaded under a dark September sky. A wooden cross painted white, bore his name and the date of his passing. Nobody spoke and our heads were bowed in grief. I looked at the mud sticking to my shoes. It was reddish brown and soft, like earth on a hillock after the rain. I have seen such earth before, in the muddy fields among the Sinicaran hills in Albay, along the muddy trails in June beneath the church of Antopolo. But as we walked away and I looked back, a dark smoke floated among the dying trees in the graveyard wind-borne from a dozen chimneys of a sprawling ammunitions factory. Nanoy’s grave stood lonely in the autumn evening.”