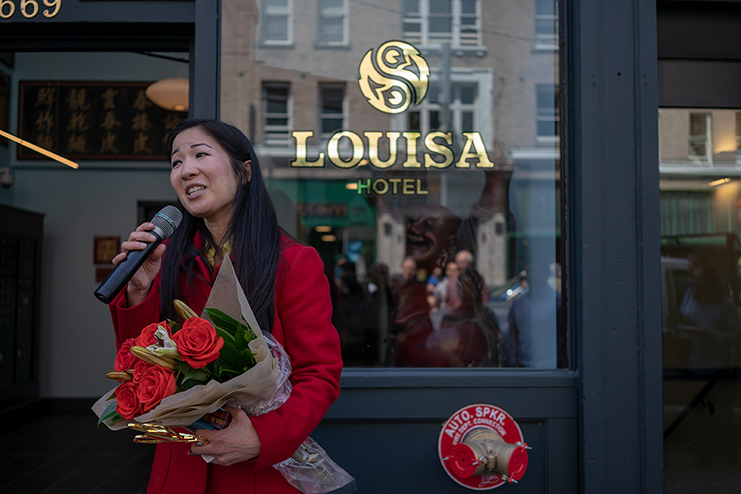 Monks from the Fa Sheng Temple offered prayers in front of the Louisa Hotel’s freshly-painted doors, flung open for a ribbon cutting ceremony on June 17. They prayed for prosperity and happiness for the new businesses moving into the ground floor, and that any wandering souls remaining in the building would go to a happier place.

Or if the souls didn’t want to leave, that they at least coexist in harmony with the new people moving in.

For the first time in 50 years, the Louisa Hotel will be home to residents who aren’t birds or spirits. Newly renovated and rebuilt after a fire burned through half the building in 2013, the Louisa will provide 84 units of housing for priced for those making between $35,000 and $85,000 dollars per year.

For Tanya Woo, it’s “a dream come true to see the building back in use.” Tanya’s father Paul Woo bought the Louisa in 1963. “In a way I’m probably losing it, because it’s going it to the community, it’s going to people.”

For the past five years, the Woo family has been restoring and rebuilding the Louisa. Much of the inside is new, but its rich history is on display, from its intact historic facade and bay windows to the stunning Prohibition-era murals from a jazz club, discovered by surprise in the basement during construction.

As in the past, the Louisa will remain a relatively affordable place to stay. All of the Louisa’s units are income-restricted, for people earning between 40 to 100 percent of Area Median Income (AMI). The hope is that the building can house nurses, teachers and other workers who might otherwise be priced out of Seattle.

At first, offering lower rates while still paying off the construction costs looked unfeasible, according to Woo, but it was made possible by a partnership with Valerie and Greg Gorder, who wanted to address a lack of middle-income housing in Seattle.

“We wanted the hardworking people of Seattle to have a place to live that wasn’t outside of where they’re working hard, and near transit,” said Valerie Gorder.

The Seattle Chinatown International District Preservation and Development Authority (SCIDpda) is managing the building, chosen for its experience managing income-restricted properties and dedication to retaining people living in the area.

At the Louisa’s ribbon cutting ceremony, where lion dancers performed and offered protection to the building, retired newspaper reporter Judi Hunt said she’s moving into the Louisa because she earns too much for qualify for Section 8 housing, but wanted to find somewhere small and affordable to settle into.

James Luckhurst and Keisha Hipp moved into the Louisa this week from Parkland, a suburb seven miles south of Tacoma. Luckhurst is a manager at the Jimmy John’s in Pioneer Square and was commuting around two hours to and from work. The two were looking for somewhere to live that was “affordable, available, wasn’t a generic glass and steel building,” Luckhurst said. “We got really lucky, honestly. We applied and there was a waitlist like the next day.”

“It’s beautiful,” said Hipp. “You feel like you’re living in a hotel.”

The Louisa was built in 1909 as a single room occupancy (SRO) hotel, designed by followers of Frank Lloyd Wright’s architectural style. It’s the only building in the neighborhood that still has once-common bay windows, now fixed and freshly painted.

At one time, each bay window was attached to a single room, typically shared by two or three men at a time (now, rooms with three bay windows are some of the Louisa’s priciest units). The Louisa housed Chinese, Japanese, and Filipino immigrants, including many workers in Alaska’s fish canneries. In the mid-1930s it was home to an African American jazz club in the basement. The Wah Mee Club was once the site of high-stakes gambling, and in 1983, the deadliest mass murder in state history.

Soon after Paul Woo bought the building, the upper floors were closed, but the Louisa was home to Mon Hei Bakery, the first Chinese bakery in the neighborhood.

On Christmas Eve in 2013, half the roof caught on fire. The upper floor and part of the interior were destroyed. With the roof no longer holding the walls together, they were in danger of collapsing. The building was condemned and the walls stabilized.

The building was boarded up, and almost half of it was demolished, leaving a pit for three years. While the facade, a national historic landmark, was saved, the rest of the building was gutted and rebuilt. Lead paint, plaster and timber damaged by water used to extinguish the fire, were removed.

As it was rebuilt, the Louisa revealed some of its secrets.

“Up to demolition of half the building, we were discovering crazy things,” Woo said, including an old casino upstairs and secret passageways throughout the building, in walls and columns. Construction crews found murals from the 1920s, the only remains of an African American jazz club, on either side of a staircase. The murals will be on display under glass in the parking lot, and may be part of a future historical walking tour, Woo said.

The process of preserving the integrity of an old building while bringing it up to modern requirements was “a fine dance,” Woo said.

“Basically we took an 100-year-old building, we took the shell,” said Woo. Electrical wiring, plumbing, earthquake, fire safety and restaurant codes, “had to fit in this old building that we couldn’t really change.”

Renovating a historic building was restrictive in some ways — they couldn’t build up, and needed to carefully replicate damaged bricks on the King St. and 7th facade, finding just the right type and tumbling them to look old.

Renovation was costly. “It’s three times more expensive to save something than to build new,” Woo said, which means renovating the building’s old side was more expensive than completely rebuilding the new side, which mimics the old, but is reconfigured to fit more units.

But the costs and challenges were worth it, Woo said. “I think it gives off so much more character, so much more charm than new and tells a story,” she said. “You’re living in history, you’re walking through the halls where immigrants walked through back in the 1900s.”

A dark part of the Louisa Hotel’s history that likely won’t be memorialized is the Wah Mee massacre, in which 13 people were murdered in a robbery. The massacre gave the neighborhood a bad reputation, and affected its economy for a long time, Woo said. “I think it’s still very fresh in a lot of people’s minds, and a lot of people here in Chinatown were affected or lost somebody,” she said. “I think it’s time to just move on and to try to heal.”

Some of the old, deep red-brown wood, was saved and was used for baseboard, trim, and a staircase.

The building contains 30 types of unit, many box-shaped. Windows look out into alleys, or one of the two light wells painted a faded lemon yellow. In the middle of the two lightwells, almost floating, sits a penthouse, a brand new addition.

In homage to the 2013 fire, flooring on the fifth floor is a grey charred ash color. Elsewhere, the building has been repainted in the blues and greens of the old Louisa.
Each fifth-floor room that faces the street has private roof space, with views of snowy mountains, King Street Station tower, and the windows and beige bricks of the Goon Dip Building across the street, built only a few years after the Louisa.

Many artifacts salvaged from the building will return. Soldiers from WWII battleships left graffitti in the bathrooms, and some of this will live in, once more in the bathroom. Old calendars, bottles stowed in the walls during Prohibition, gambling sheets and Chinese brushes were saved.

In the lobby a large wooden Buddha statue stands behind a window, arms stretched upward, a joyful grin on its face. Above the mail boxes is an old copper fire extinguisher, murals and signs from the building. Woo wanted to honor the legacy businesses that served the community for decades. Signs for Sea Garden restaurant and Mon Hei Bakery, displaced by the 2013 fire, join older signs on the walls of the lobby.

Of the seven businesses displaced in the fire, including beloved places like Sea Garden Restaurant, Mon Hei Bakery and Liem’s Pet Shop (whose sign is still hanging in the alley), most won’t be returning, despite Woo’s efforts. Only the Seattle Gospel Center Bookstore is coming back to one of the restored ground floor retail units.

The owners of these businesses are in their 70s and beyond, and feel it’s time to retire, Woo said. “We worked really hard to try to bring them back into the building, but the cost of rebuilding, getting a loan, starting another business and having that consume 10 to 30 years of your life again was just too much for them,” she said.

Instead, a Korean BBQ restaurant, a Hong Kong-style restaurant, an ice cream shop, and, Woo hopes, a traditional Chinese herb shop, will move in, likely in September.
Rachtha Danh, who works in Property Management and Community Initiatives at SCIDpda, hopes the wide range of income levels provided by the Louisa will help the CID thrive. “I don’t like to use the word ‘revitalize,’ because this is always a great neighborhood,” he said.

The Louisa is open to tenants from anywhere, but as building manager, SCIDpda has targeted the CID in its outreach, and there has been a lot of interest from the neighborhood. “At the lower percentage, we’ve been getting people from around the neighborhood that are facing displacement,” Danh said.

Woo hopes the new Louisa will help retain seniors living in the CID. She is proud that the building’s historic character could be preserved, while adding workforce housing and small retail spaces.

Though the fire forced Woo’s family to redevelop the Louisa, she hopes other buildings in the neighborhood, most of which have vacant upper floors, can be renovated too. It’s a challenge, because “none of us have the money to redevelop our buildings,” she said, and she hopes the city can help.

Woo’s connection to the Louisa is personal. “I really love that building, I kind of grew up in that building,” she said. Her father, who helped start the Mon Hei bakery before selling it to the bakers, had an office on the seventh floor, and Woo spent a lot of time in the neighborhood as a child, participating in drill team, martial arts and Chinese language school.

Woo’s father passed away when she was young. After the fire, she went through his papers, and learned more about him, and his dreams and hopes for the Louisa. “I learned about how much the building meant to him and to our family, and how much he loved this community,” she said. “This dream my father had for the building is finally being realized, and I really wish he was here to see it,” she said. “I always think about, is he proud? If he was here, what would he say?”