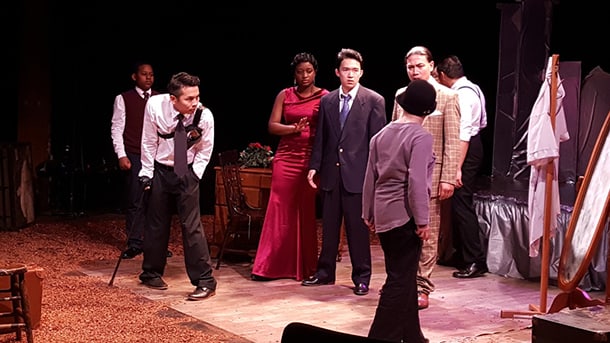 Seattle theatre artists Tom Dang and Elizabeth Wu have teamed up to present one of their favorite Shakespearean works, Richard III, as the Spring 2017 production of REBATEnsemble. That name, which is part acronym, stands for “Recession-Era Broke-Ass Theatre Ensemble”—in other words, as Dang explains, it is a theatre company that utilizes its limited financial means as part of its aesthetic.

This production of Richard III has been years in the making. “Before I joined REBATEnsemble as Associate Producer, I was already in the early stages of figuring out which play from Shakespeare’s canon I wanted to mount after graduation,” Wu said. “Tom and I were very close friends and colleagues in the Seattle theatre scene at the time, and I knew that when he first directed Richard III back in 2012, he did so because he was so drawn to the character: Richard’s torments, passions, and dreams.”

Dang shares a similar memory. “From my understanding, Elizabeth was still deciding whether to do The Tempest, Richard III, or Midsummer Night’s Dream in a site-specific location in Chinatown,” said Dang, who serves as the Producing Artistic Director of REBATEnsemble. “I was hanging out with her in a bar when the idea crossed my mind to ask her to direct a show for us.”

Wu was all for it, which was no surprise to Dang. “We had worked together in the past as director and playwright in her production of Stories from Chinatown and it had been a great experience,” he said. “We talked about Richard III since I had always coveted the role of King Richard and Elizabeth agreed to direct if I played the part—the match was made.”

Wu’s choice of Chinatown for the production’s setting was based on years of prior study. “I’m no stranger to Seattle’s Chinatown, and for many years I saw its history, culture, and internal politics mirrored in the Shakespearean plays I studied in college,” Wu said. “In my mind, we have our own Seattle royalty right here in the Pacific Northwest, and they are the hardworking Black and Brown communities who lived, loved, and created the bedrock of our Northwest American identity.”

Wu hopes that audience members will learn a bit more about Seattle history. “To the north of South Jackson Street was Seattle’s giant Red Line (Yesler) with Japantown and Chinatown straddling it on either side, in addition to the Central District lying to the southeast,” she said. “You had Filipino Americans, folks of color, and white people coming in for entertainment, food, and solace, and corrupt politicians trying to sell Seattle as a clean, white city, while still profiting from illegal dealings and crackdowns happening on South Jackson.”

And those ulterior motives set up the Central District to be the site of conflict, which is always a source for compelling drama. “Right there you have the makings for an intense power struggle, territory wars, distrust, and a search for redemption in one’s own life,” Wu said. “This setting has truly allowed us to see how the machine of American systemic racism can cause a person to turn on their own people and own communities.”

It took little persuasion for Wu to bring Dang on board with the idea of setting Richard III in Chinatown. “I came to him and said, ‘I want you to play Richard in jazz-era Seattle Chinatown. We need to see the interior psychology of the Asian American man at odds with his society, and you’re the one to do it,’” she said. “The rest was history.”

With the lead role of Richard III cast, Wu set about casting the rest of the actors. “Our cast is large, diverse, and multigenerational,” she said. “Our actors who play King Edward IV and Prince Edward (Tee Dennard and Catalino Manalang) are actually Grandfather and Grandson in real life.”

Dang fully supported Wu’s goal. “She communicated to me that she wanted to cast actors of color in leading Shakespearean parts and place them in a setting that supported them,” he said. “I completely support Elizabeth’s conviction for creating more ways for actors of color to be featured in euro-centric work and playing leading roles in general.”

Wu gives Fujii a lot of credit for the successful outcome of the show. “A lot of Malie’s work involved taking the vision of the show and bringing it into a concrete reality for us,” Wu said. “Whether it was working with our child actors on lines, characters, and stakes, many of whom this was their first time doing Shakespeare, or simply being in the rehearsal room on standby, her work, as well as the work of our incredible Stage Manager, Meghan Woffinden-Luey, have been the anchoring point to our production process.”

For Wu and Dang, the rehearsal process has been almost as much fun as presenting the show itself. “You could make a play just about all the stories that have happened in rehearsing this show,” Wu said. “For many in our cast, this has been their first fully mounted Shakespearean play. Some of my favorite moments have been watching and helping them tackle Elizabethan English for the first time.”

Wu shared her favorite story from rehearsal. “Michael Cercado, who plays Sir Richard Ratcliffe in the play, and is a naturally gifted comedic actor, had a simple line in which he says ‘No, my lord’ to Richard,” Wu recounted. “He was still getting off book at the time and you could see the wheels turning in his head, when suddenly out of nowhere we hear ‘Naw ma lord! NAW!’ Oh my goodness! We were in stitches!”

Dang reported an equally humorous anecdote from his fight choreography rehearsal. “Morgan Grody, our fight choreographer, is an incredibly talented individual,” Dang said. “He really knew how to articulate the mindset behind the violence.”

Dang described the rehearsal of the scene in which Lord Hastings is murdered. “Bunthay Cheam, who plays Buckingham, and I were goofing off by pretending to be modern day gangsters,” Dang said. “Morgan saw this, came over to us, and asked Bunthay, ‘how thug you try’na make this?’ I said, ‘as thug as we’re allowed to, we’re mobsters after all.’”

According to Dang, that was all the inspiration that Grody needed. “Morgan grabbed the gun, shot a couple of times, wiped off the gun with the hem of his shirt, and threw it next to Hastings’s dead body,” he said. “I swear to God I heard Dr. Dre playing in the background when he did that.”

Despite being busy with Richard III, REBATEnsemble and its members are gearing up for numerous projects ahead.  “When we began REBATEnsemble, we never imagined it would grow to what it is now,” Dang said. “We were so proud of our scrappy style because we were able to make entertaining and relevant theatre without the confines of organizational structure and big budgets.”

The team has several shows in development, and they don’t plan on giving up their interest in Shakespeare any time soon. “Our past summer Shakespeare in the park production of The Tempest was so successful that we are planning to do a summer park play each year,” Dang said. “There is talk about doing Macbeth, Midsummer Night’s Dream, or even both in repertory rotation. It’s been a big year for us and we’re so excited to move forward with so much momentum.”

Richard III runs from May 4 to 21 at Theatre Off Jackson, 409 Seventh Avenue South, Seattle.  For more information, visit www.rebatensemble.org/main-stage-2017.html.