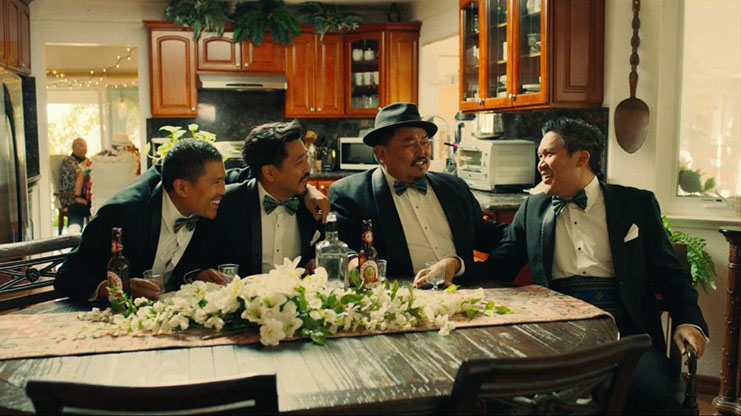 Recent decades have brought forth a cornucopia of Filipinos and Filipino Americans who create music, videos/films, and literature to share with a global community. The recent romantic comedy, The Fabulous Filipino Brothers, presents a significant segment of the kaleidoscope that is the Filipino American community. Specifically, through the Abasta Family, this film tells the story of Filipino American families formed in the post 1965 immigration period. This is a work of love and joy by the real-life four multi-talented Basco Brothers—Derek, Dante, Dionysio and Darion with their family and friends.

The opening colorful collages of the Basco brothers from babies to adults in various activities provide a warm lead-in to the four vignettes of each of the Abasta brothers. The oldest brother, Dayo, is coined by their little sister, Doris, as the reliable one. Duke is the lucky golden boy; David, the fun loving, care-free one, and Danny Boy, the one experiencing the dark side. There are many ways to describe and understand this story. I’ve chosen three—the bell curve of the American dream, the infinite  ircle of the “Jungle Asians”, and the kaleidoscope of multicultural, mixed-race Americans.

The bell curve of the American dream

Post-World War II Americana narrated a bell curve or normal distribution where most folks aspired to, expected to be, or were already in the broad middle class. A home in the emerging suburbs was the symbol of the American Dream. I love how the focus is on the East Bay community suburbs and the ‘other Pittsburgh.’ The Abasta Brothers are American-born sons of successful post-1965 immigrants. The family home is spacious, filled with many rooms and huge dining tables as well as a tropical patio and gardens. The foods and drinks are plentiful and wide-ranging. The image is trappings of an affluent, consumer-oriented middle class. The brothers can be responsible or care-free, ambitious or lazy, self-centered or empathetic, dark or illuminating. They can compete or cooperate. Life is superficially good. When crises occur, we hear from their parents. Dad and Mom finally come to the story and assert themselves telling their sons to grow up.

The infinite circle of the “jungle Asians”

The Abasta Brothers are also tribal. They call themselves “the Jungle Asians.” The tribe is an infinite circle that holds multiple generations. The family home houses Lola/Grandma, Dad and Mom Abasta, oldest son Dayo, his Chinese American wife Emily, and their numerous children. For the last two years, troubled brother Danny has resided in the children’s playroom. The social group protects the individual members. In the Abasta home, like many Filipino and Filipino American homes, you can always go in and out. You can always go home. There is always food to share and a place to sleep. There is someone to talk with or someone who listens. Rituals of obligation and tolerance within the tribe are as important as social past times—from karaoke, to cha cha, to gambling.

The brothers do not want to lose touch with Tagalog even as they mispronounce the Filipino foods they eat routinely. There are also the centuries’-long rituals from colonization that deepen tribal binds. Specifically, Catholicism is about saints and sinners. We accept or tolerate the good and bad; the wife and the mistress. We do it and confess. While Lola represents coming full circle to the acceptance of death, the younger generation reciprocates with the acceptance of life. Anna, Duke’s former girlfriend, chose to bear her son out of wedlock. As Teresa, Danny’s new love tells him, “Love may not be forever but exists to create things, like other life.” Within the circle, men choose to father children who are not their biological offspring.

The kaleidoscope of multicultural, mixed-race Americans

In Pittsburgh, CA, as well as in other post 1965 immigration communities in the United States, the circle has been replaced by the kaleidoscope—a constantly changing pattern or sequence of colorful objects or elements.

Pan de sal and ensaymada get confused with Ensanada, Baja California. Familiar rituals make room for new. Some children live in their own households as married couples or single parents but they still regularly return to the family home, even daily.

The role of women in the background cooking for and serving the men-children continues but take-out is readily available and the men are also in the kitchen. They, too, help with Lola’s dialysis appointments. The strong silent type of Dad Abasta’s generation—where the women did most of the talking—makes way to younger sons showing a range of unabashed emotions. As little sister and a nurse, Doris says, “The story of my life. They don’t know they have a sister. It’s the women in the family who hold it down.”

For the fabulous brothers and sisters, the Philippines is no longer home but a place to visit as part of global Asia. The Filipino American Community Center, a touchstone of pride for immigrant parents, becomes just childhood social memories for their U.S.-born sons and daughters. In turn they bring forth multicultural and multiracial children and grandchildren, the common destiny of multigenerational Americans. They still believe in weddings in beautiful homes, or other splashy venues. They lead with their hearts, whether or not they know of America Is in the Heart by pioneer Filipino American Carlos Bulosan.

My one regret of The Fabulous Filipino Brothers is that given the adult focus, it isn’t a family film for children to view.

The Fabulous Filipino Brothers can be streamed via Netflix, VUDU, Prime Video or Aoole TV.