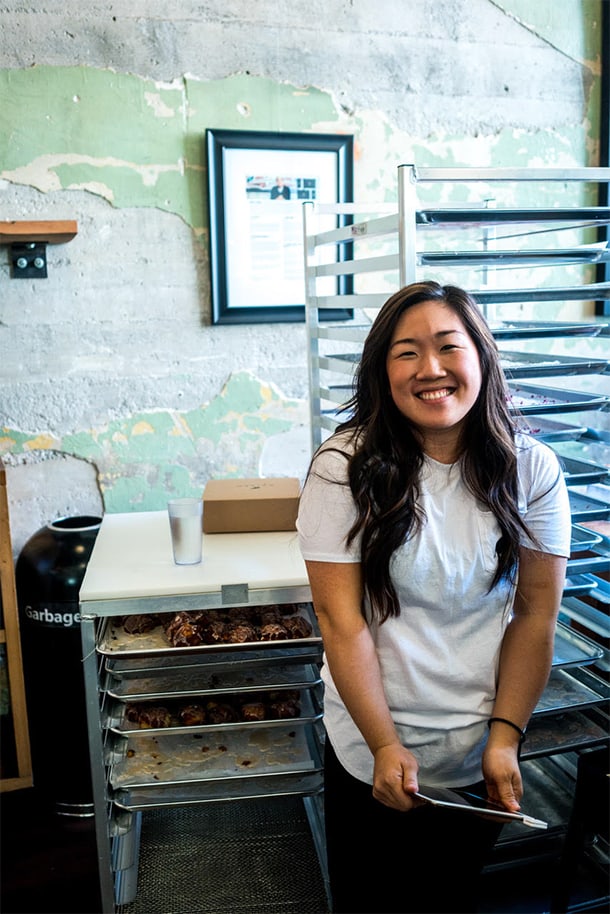 Raised Doughnuts was born out of a love for doughnuts and baking. Launched earlier this year and still newly established, I sat down with founder, Mi Kim, to discuss her passion and new business venture.

Kae Saeteurn: Tell me a bit about your story and what inspired you to establish Raised Doughnuts.

Mi Kim: Well, it was just never a thing that was on my radar. My parents owned a restaurant and I saw how hard it was, and I was like, “I don’t think it’s for me,” but something just clicked last year.

I started at Macrina [Bakery] when I was 18, and it could’ve been like a lifer job, but I wanted to try something new. I was thinking about what I wanted to do, and I always said it would be a doughnut shop. Growing up I always ate doughnuts with my parents. Our whole family loves them. For the most part, everyone’s got a little sweet spot for doughnuts, and in Seattle I didn’t feel like there was a go-to spot for me. I just wanted to try something different. A lot of places do classics, but I also wanted a mix. Also, with baking, there has to be a love for creativity and there has to be a love for doing the same thing over and over everyday. When you’re in a bakery, you have to love that repetition. For me I thought of doughnuts. I thought, “Well, it’s going to be the same dough, but I can get as creative as I want with the flavors and toppings. I’m going to stick with what I want. My passion, my love.” That’s where it kind of started.

KS: Can you tell me more about your creative process?

MK: Creatively I think about different ways of presenting things. I’m a huge texture person, and there are so many different mediums of food. I like to see an idea and see how I can create it in a different way, or get those flavors in different ways. Kind of like breaking it down and building it back up, and flavors that aren’t typical, but aren’t too crazy. I love simple flavors. I think you should always have the originals because people are always going to want the maple bar, apple fritter, and plain glaze, but to also keep it fun and exciting.

KS: What are challenges within that creative process, or as a business?

MK: Biggest challenge flavor-wise, creative process-wise is making sure the doughnuts stand up to temperature and the amount of time they’re going to be sitting out. I use a lot of freeze-dried things, but those things really take in moisture. I have to take that into account and find the right way to do it.

Operations have been really interesting at pop-ups, learning what people want to know. I didn’t know people wanted a full-on description of things. They want to know all these things I didn’t know was that important initially. Now, just getting feedback from the people that are helping me and feedback from everyone else, I’ve learned a ton. It’s really interesting to learn these operational intricacies that you don’t think about.

KS: How does your cultural background influence your work?

MK: Definitely flavors. I always want to include some kind of Asian [flavor]. I’m Korean, so I love sesame and red bean. I think those are really fun, and they’re not so common around here, so it would be really fun to expose people to it more in different ways. Growing up, my parents just kind of showed me what hard work was and how much you have to put into things to just get by even, and kind of prep me to know what to expect doing this even though I never thought I would.

KS: How do you hope to raise the doughnut bar?

MK: I think doughnuts should be a certain way. There are basic doughnuts and then ours are just a little bit higher in a way, such as the quality of ingredients we use. It’s a step up, and the dough is what I care about the most. At the end of the day I judge a doughnut spot by their plain glaze because you can mask a doughnut in any way, by filling it, by topping it, but the texture of the dough has to be right. For me, I’m going to make sure that the dough stays consistent and that’s kind of my “raising the doughnut bar.”

How I came up with Raised, I was in San Diego with friends and I was like, “I’m going to do this doughnut shop, but I don’t know what I want to call it. How about Raised Doughnuts?” We nixed it and came up with all these names, and then I came back. I also love elephants, and so the elephant [logo] with the nose up means it’s good luck. In that sense too, it’s raised. Overall a higher quality doughnut.

KS: You’ve done two pop-ups previously. What do you have planned for the next couple of months?

MK: Right now we’re looking at spaces. Our whole goal was to open by the summer, but we’ve had a really hard time finding locations for a kitchen. Other than that, we might start getting into farmers markets to ramp up as we find a spot. Farmers markets, more pop-ups, talking to some locations about doing pop-ups, and getting the logistics down a little bit better.

You can stay up to date with Raised Doughnuts by visiting www.raiseddoughnuts.com.