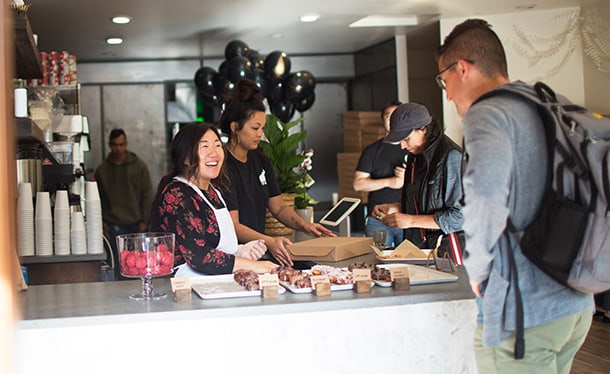 It’s Saturday June 30th, the opening day for Raised Doughnuts, and the morning clouds have decided to swarm Seattle’s capricious sun. A line of fifty people trails out from the doorsteps of Raised Doughnuts’s new brick-and-mortar storefront, and more families with dogs and children join them. Although it is cloudy at 7 a.m., and a bit too early for some of the little ones in line, folks appear to be in bright spirits when the doors to Raised officially open and the scent of fresh doughnuts waft through the air.

“We got up really early to be first in line, but now we’re here and we see that we’re not!” says Cassie, a returning customer of Raised Doughnuts, who stood with her patient pug, Shrek. “It’s a good thing I think, and we’re all here sharing a good sense of community because people are showing up and supporting local businesses.” On the other side of the counter, Raised Doughnuts owner Mi Kim has been up since 2 a.m. preparing approximately 1,000 doughnuts in a variety of textures, shapes, and true colors derived from each doughnut’s unique flavor profile.

Kim’s baking journey started while rising through the ranks at Macrina Bakery, where she worked for ten years. Before that, she graduated from pastry school. Kim began experimenting in her spare time and was encouraged by her friends, the same ones cheering her on on the opening day. Kim was also spurred by the lack of Asian flavors in the doughnut world. She wanted to create her own interpretation of the beloved baked good.

“My inspiration comes from my experiences and my friends’ experiences,” Kim says. “I wanted to create things we don’t see. I like to take flavors and trying to do them as they want. At the end of the day, I’m a purist and I try to do them justice, I try to take it and distill the flavor.” This motivation transformed into pop-ups at Eastern Cafe (owned by Kim’s business partner, I-Miun Lee), or catering at special events like the Vietnamese Friendship Association’s 40th birthday. Kim even hosted doughnut making classes for bakers of all ages so they could take home the tips and tricks of the doughnut trade. And at the frontline of each occasion was the elevated treat that paid homage to the tastes she and her friends call home.

A day before the official opening, Kim expressed her thoughts on the big day. “It’s been two years since I’ve been wanting to do this. Grand opening-wise, we think it’s going to be pretty fun, and we’ll have all our flavors out. I think a lot of people understand that we are still figuring things out. We always learn from every day, and how to make things more efficient for us.”

“I never thought I wanted to open my own place watching my parents grow up — it’s hard work,” Kim continues. “It just hit me two years ago and when I used to go to the shop we’d go to a random gas station and I’d grab crullers. My dad’s favorite are crullers.” (Crullers are a fried pastry neatly twisted into a circular braid with a hole in the middle.) Kim adds, “It’s such a little thing, but I feel like those little moments are what make up memories and experiences. I wanted to build something that’s the same. I consider donuts not a fad — they’re something that stay true and last throughout time.”

Kim says: “I want to create a space for people to come out with their kids, or a date spot in the morning, or weekend with you boo. It’s quick and you can just come in eat a doughnut, and it’s starting your day on a nice note. Something to look forward to for kids especially.”

Raised Doughnuts’s location is intentional, Kim says. “The neighborhood has been super welcoming to us, we’ve received fliers welcoming us to the neighborhood too. I got an email saying ‘My daughter loves donuts!’ so it’s even exciting for parents to do for their kids. And that’s why we wanted to be in a neighborhood, I love how we’re right on the cusp of a residential.”

In the morning line, folks have begun to enter the shop and emerge victorious with a box of doughnuts stickered with the official Raised Doughnut’s logo, a triumphant elephant. The interior of Raised features modern chevron tile wrapped around the coffee bar, golden cafe tables, and a nice photo opp for visotrs: A statement wall cast in marbled jade green with neon light letters broadcasting, ‘Doughnuts Make Me Happy.’ Atop the charcoal counter top, the stars of the show are selling out fast. There’s blueberry basil, a happy medley of Kim’s favorite pairing: herbs and fruits. Alongside it is strawberry, a classic but made with real strawberries to ensure the authentic flavor carries through. Her ube coconut doughnut also makes an appearance, a result of persistent trial and error in nailing down the ideal cooked down yam ratio to sugared milk. And lastly, Kim and business partner, I-Miun Lee’s favorite, black sesame.

Kim exclaims, “I love sesame oil! If you’re Korean you gotta love sesame oil. But I wanted to make it more interesting.” She explains her thought process, “If I do it on a raised doughnut, it’s a brittle like black sesame candies that are sticky but crunchy. I make a dry caramel and add the dried sesame in and I lay it out and crack it up and it incorporates a pure black sesame flavor and you got the crunchy, sweet and salty. It’s my favorite of all of them it’s the most nostalgic. That’s the mix I like, nostalgia and flavors.”

For the first couple months, Kim plans on having fan favorites which are well known on Instagram, then continuing to develop new flavors that are true to the season, like her latticed pie doughnuts made with a fresh fruit compote, or using pomegranate in the fall in addition to traditional maple bars in a mochi doughnut form.

As for future plans, Kim hopes to have two friers to increase the number of doughnuts Raised can produce. Since the yeast in the doughnuts takes a certain amount of time to rise and can be quite temperamental, Kim is only able to make a limited amount of doughnuts each morning while still retaining the freshness Raised Doughnuts strives for.  Kim says, “Right now at this time we’re not looking to do wholesale, but who knows! I still want to do pop-ups in the future. I want to have staffing and still do pop-ups and maybe doing them in the morning or doing them at night.”