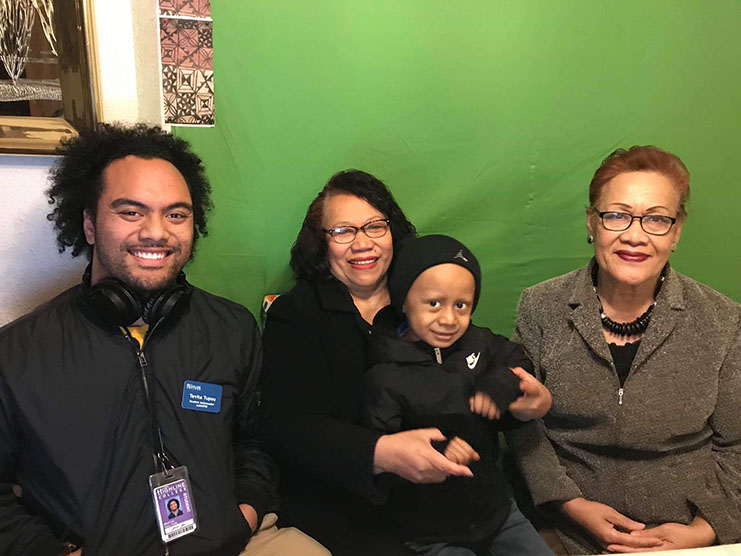 The Tongan community within the greater Seattle area has found a way to stay connected with each other through the power of radio. The Voice of Tonga/The Sound of Polynesia has been integral in keeping the community together and unified on issues and support. Serving the community came from the vision of Tongan woman Brenda Kongaika.

Based off her academic prowess, Kongaika immigrated to the United States from Tonga when she was 16 to attend BYU-Hawaii on a full scholarship. She married, started a family and moved to the mainland to Bellevue, Washington in 1972. There she was employed working in the immigration office for the federal government and also for the Washington State Department of Social and Health Services (DSHS) as an intake interviewer for employment security.

With over a decade of working in immigration and employment security, in 1985 Kongaika and 13 other people working at the DSHS were picked by then-Governor Booth Gardner to work on creating a welfare system that was more responsive to the needs of those who depend on it. She was the only Polynesian and the only woman on the team among the 14 people that were picked. What they developed became the WorkFirst program, which is still used today.

Meanwhile, as Kongaika was economically empowering those who had fallen on hard times with real life skills of the WorkFirst program, the Tongan population was increasing around Seattle. In the same year in 1985 when she was tasked to help develop the WorkFirst program, she also started the Radio Voice of Tonga KKNW11 AM out of Bellevue, Washington.

The radio program was twofold. The Voice of Tonga would have announcements within the community spoken in Tongan, and the Sound of Polynesia would be the music section of the program featuring the variety of Polynesian songs such as from Fiji, Samoa and Hawaii.

Kongaika said, “We will talk about community needs, we’re touching into immigration, to health. All those issues, events, you know? Where we have Tonga Flag Day and churches and religion.”

As an immigrant woman of color, Kongaika has taken the skills she acquired along her journey working with people and has used them to give back to her fellow Tongan and Tongan American Community through the power of radio.

Christianity is a huge part of Tongan culture as there are around 14 denominations alone in the greater Seattle area. Within those sub communities, the radio station would announce the weekly activities of all the churches.

“Though our radio program I would announce, ‘ok for senior citizens, we have a food bank in this location, and it was run by Tongans,’” said Kongaika.

The radio program covered the Tongan communities in the whole state of Washington, and its popularity grew around to other stations in Oregon, Idaho and Alaska. As the program grew so did its community outreach. Radio Voice of Tonga would consistently feature other Polynesians in the area like the Fijians and Samoans to discuss some of their community issues and resources for them. The program in 1993 also to helped to sponsor the Polynesian sections of the Folklife event for the Seattle Seafair Festival.

Soon after, Kongaika partnered up with another Tongan woman, Fatima Aho’, who also had the same enthusiasm for radio, and they collaborated in running the Radio Voice of Tonga. They’ve recently expanded their reach internationally to New Zealand and Tonga through the utilization of a visual broadcast through Facebook.

Tongan culture somewhat straddles the line between being a pure patriarchy and matriarchy. In the hierarchy, women have power and obtain wealth in social settings, while the man has more power in a legal setting. The equality among of the power difference is argued over. However, what is agreed upon is how rigid the social positions are. People don’t really stray off the path. Kongaika approaches this in a respectful yet uncompromising stance.

“That’s the one thing. I don’t want to use it as an issue to us. I just know how to handle that. We bypassed it by just pushing the Tongan mentality of men [toward women], ‘nofo e’i ‘api!’ (stay at home), ‘wash the dishes and cook’…I am not one of those.”

You can find Radio Voice of Tonga on Facebook at: https://www.facebook.com/VoiceofTonga/