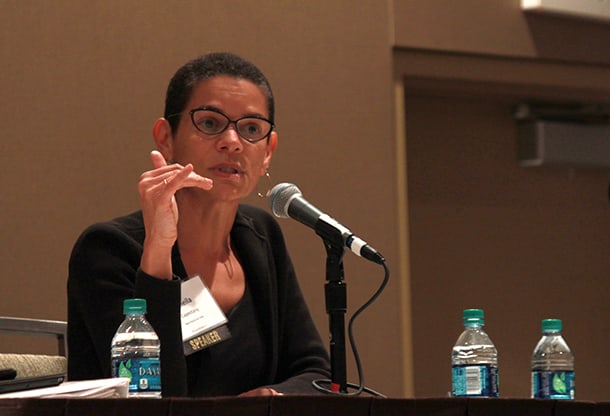 At a $70-per-ticket summit on December 7, attendees discussed Washington state’s budget and how to change it to benefit marginalized people and close wealth gaps.

“When progressives get together we usually agree with one another and vent about Trump and whatever,” said Lt. Gov. Cyrus Habib, a featured speaker at the Washington State Budget & Policy Center’s (WSBPC) Budget Matters Policy Summit. “A lot of times we talk about survival and we don’t take the next step to talk about prosperity. As long as we only focus on survival and we only focus on justice, the gap between the haves and the have-nots is going to get bigger.”

In Washington state, the wealthiest one percent of the population has an average income 22 times higher than the average income of the entire bottom 99 percent, according to the Economic Policy Institute.

“Increased economic inequality is not random,” according to WSBPC’s “Building an Inclusive Economy” report, “but rather it is the result of many state and federal policy and budget decisions that have negatively impacted certain Washington state residents.”

One of many policies that produces inequality in Washington, according to WSBPC, is the state’s tax system, which forces working class and low-income families to pay a greater share of their incomes in state and local taxes — as much as seven times more — than the wealthiest. “[Policy-makers] must take steps to ensure that the tax code no longer over-relies on those least able to pay while offering tax giveaways to corporations and the ultra-wealthy,” according to the report.

When it comes to solving these inequities, Habib said, “It’s our duty to not check our privilege at the door but to use our privilege.”

Another speaker that evening was Glenn Harris. He published Colorlines, a news site focusing on race. Harris is also the president of Race Forward, an organization that conducts research focusing on systemic analysis and race issues to help people take effective action toward racial equity.

“There’s a whole history, a daily institutional structure that drives us to all the same outcomes,” Harris said. “That is devastating when it comes to race, gender, and ability. When the system’s out of balance it’s not that it’s not working but that some of us are paying a higher cost for it.”

Having a job doesn’t always translate into stability. Despite Washington’s low unemployment rate, most workers don’t have stable and consistent incomes. One in five households report their incomes vary significantly from month to month. Thirty percent of Washington households do not have enough to cover basic expenses for three months if they experience a sudden job loss, a medical emergency or another financial crisis leading to a loss of stable income. But the rate for people of color is 50 percent, and for households headed by single women it’s 40 percent, according to Prosperity Now.

The WSBPC’s research did not differentiate between those with disabilities and those without.

Some feel, however, giving people of color and other less privileged groups a leg-up to level the playing field translates to unequal treatment and an inevitable loss to those who don’t get the leg-up. An audience member asked how to approach such viewpoints. Harris argued giving power to one group does mean rescinding some power from the other but it benefits all involved rather than simply makes one party lose. He provided an example: escalators and elevators. They weren’t made for able-bodied people, but can we imagine a world without escalators and elevators? People don’t need to see an acquiescence of some power that is then given to others as a threat. 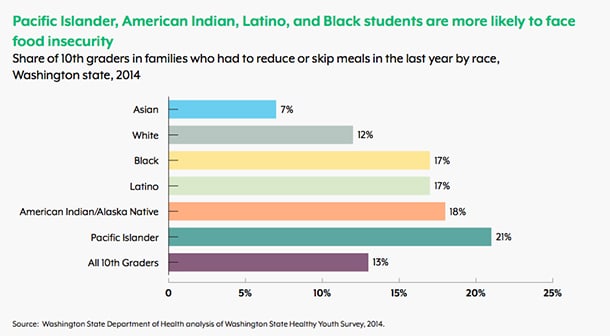 One in seven, or 14 percent of Washingtonian youth ages 16 to 24 aren’t working or in school —  but the rate is much higher for youth who are American Indian (30 percent), Pacific Islander (21 percent), Black (19 percent) and Latino (17 percent).

In 2014, Washington 10th graders most likely to reduce or completely skip out on meals were from Pacific Islander and American Indian/Alaskan Native backgrounds.

Black, Pacific Islander and American Indian students have homeless rates two to three times above the state average. The rate of deep poverty is twice as high for American Indians and Black people (13 and 12 percent, respectively) than in the overall state population (6 percent).

“This idea of building an inclusive economy is very much at the core,” Harris said. When it comes to policies and budget decisions he advised people to ask who benefits, who it burdens, and what is the point of the system in the first place.

During public questions, however, former state Rep. Velma Veloria said the Summit didn’t do enough to involve the community.

“This is $70,” Veloria said. “How many people are going to get up in the morning to be here? So when you’re talking about change in the system, this organization has to change, too. The nonprofit industrial complex is a part of the problem … it’s designed for very limited access. This is work for all of us.”

“The history of inequity and exclusion is built into the policies and practices of the institutions that serve and represent us,” Harris said. “We must work to make sure that policy is accessible to all communities. We must make sure those most impacted by inequitable policy practice have the ability to center their ideas and solutions. That is building power.”

The WSBPC will publish its Progress in Washington research and policy briefs in the coming months, digging deeper into data and offering recommendations for policy solutions.