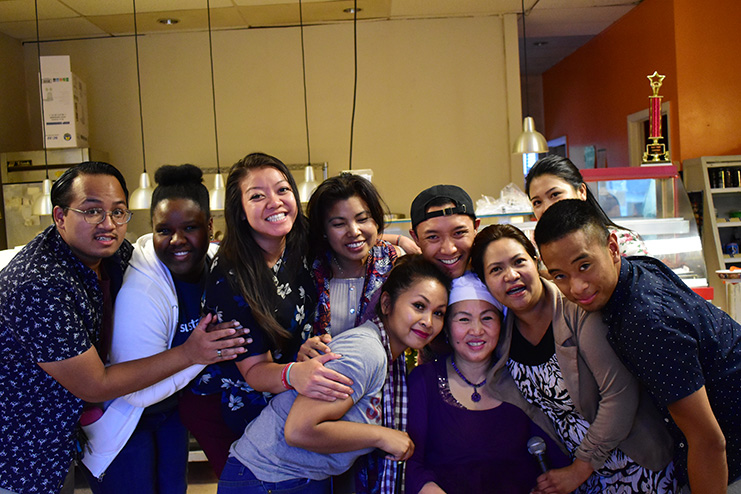 On a cloudy September 12, 2019, on the 11th anniversary of Queen’s Deli opening, the beloved Khmer restaurant closed its doors one last time. To celebrate 11 years of success for the White Center restaurant, community members created a closing day event and promoted the event as much as they could in the days leading up to the event. “A lot of people are actually here because they’ve seen posts on social media and they remember and miss her food. So, they’re trying to get their last chance to have her food at this closing day” said Queen’s Deli owner, Chanthorn Yin.

Yin’s cooking career had a humble beginning in the community. Prior to creating Queen’s Deli, Yin spread her well-loved Khmer cuisine through catering at private events. Eventually, thanks to her husband finding the restaurant space for sale, Yin was able to establish Queen’s Deli. Since then, Yin and another employee would spend every day working hard on duties like cooking, cleaning, cashier work and even deliveries. They were also considerate of the customers as they would prepare food for people to come and grab in the morning work rush.

With all of this diligence and care towards the customers, one thing was clear for Yin. “I really enjoy cooking for people. I really enjoy being able to see people enjoy my food and it gives me more energy to cook and cater for folks outside the deli” said Yin. “I’ll sometimes cater for events of 100, 250 or even 600 folks and it doesn’t matter how tired I am. I always have the energy to provide food for my community and my customers.”

As Queen’s Deli got more popular, it would eventually be known for its authentic fresh Khmer food like me ka thang (a Khmer noodle dish), salaw machu krueng (sour soup with beef and pork), and sesame balls. However, Yin’s contributions to the local communities in King County were not unnoticed. On top of handling many restaurant duties, she gave food to people who were not able to pay for it and catered at events for a discounted price. Her catering service and love of cooking helped spread an appreciation of Khmer culture and cuisine to people who otherwise may not have been exposed to either one. Yet, Queen’s Deli could not avoid the fate of the other Khmer restaurants in Washington state.

As the years have passed, more and more Khmer restaurants within the state had closed down. All of them had their own reasons for closing with Queen’s Deli closing so that Yin could take care of her 90-year old mother. However, the end result is that the community has less access to Khmer food. This void of Khmer food has continued to grow. As of September 12, 2019, Queen’s Deli was the last remaining Khmer restaurant in Washington state.

However, upon realizing this, prominent community member and organizer for the closing day event, Prenz Sa-Ngoun, quickly mobilized the community in the week leading up to Queen’s Deli closing down. “Because I personally enjoy Khmer food and it was just really sad for me to see her go, I wanted to do as much as I can since it didn’t seem like she was getting as much support. I wanted to do as much as I could to be able to bring the community together by first, notifying the community. If I wasn’t notified last minute like that, there was probably a whole bunch of other people who weren’t notified as well,” said Sa-Ngoun.

With a quick social media push from Sa-Ngoun and other community members, dozens had shown up throughout the day of September 12 to show their support for Yin and Queen’s Deli. Some community members volunteered to help handle deliveries and cleaning while others handled cashier work and running tables. Toward the evening, these community members and customers of Queen’s Deli chose to voice their support for the restaurant. “I’m extremely grateful for her to allow me to volunteer my time here, I want to pay much gratitude to her and make sure that not only I, but the community supports her transition from Queen’s Deli. I appreciate Queen’s Deli and the owners a lot for being able to provide authentic Khmer food for the past 11 years. I think that Queen’s deli and the surrounding markets are the heart of Khmer culture for the Khmer community in Washington state,” said Sa-Ngoun.

Although part of the heart of the Khmer community is now gone with Queen’s Deli’s closure, Yin made sure that the Khmer food that the community loves would be available in the future. At some point next year, a new Khmer restaurant, called Khmer Apsara, will open up and carry a bit of the legacy of Queen’s Deli. “I don’t want the richness of the Khmer food to be forgotten,” said Yin. “So before I sold the business, I made sure that I sold the business to someone Khmer to make sure that Khmer food will still be standing within the state of Washington.”