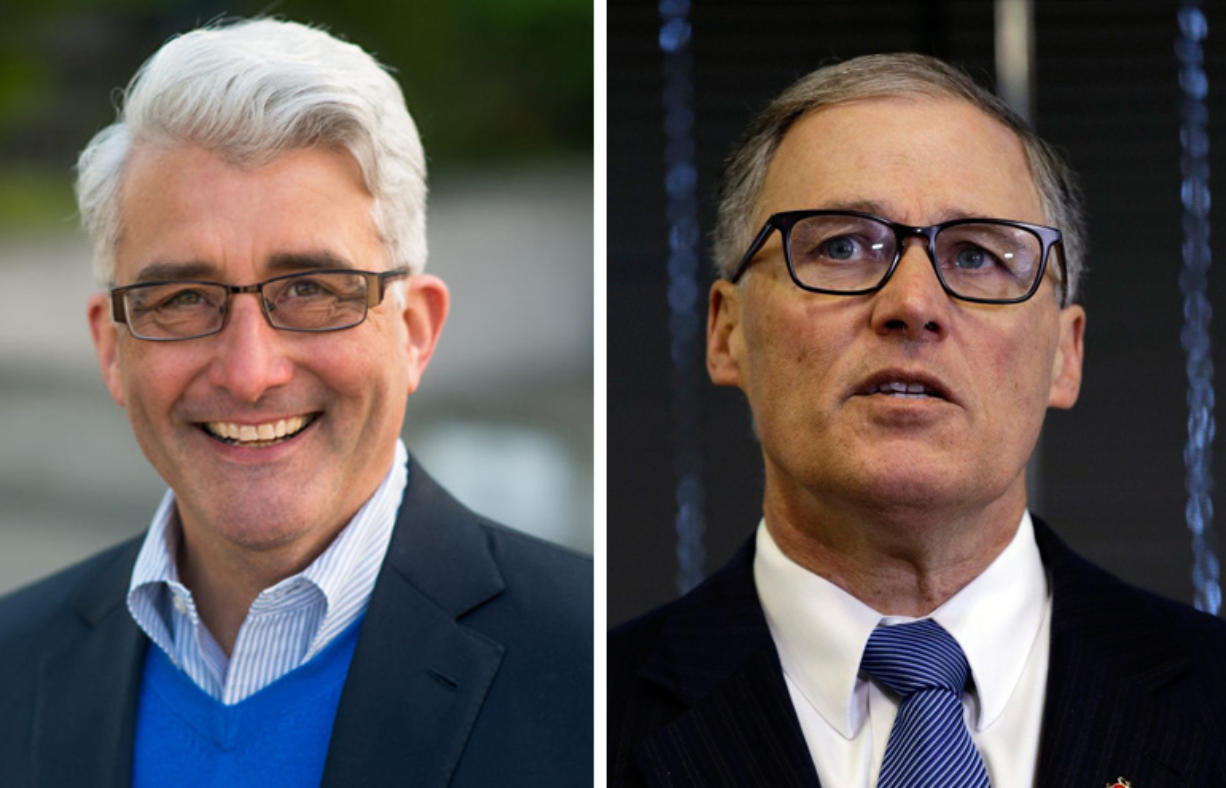 Ballots have been sent out and the final day to return ballots is November 8 on election day. King County residents can drop off ballots at designated ballot boxes by 8 pm on election day, including one at Uwajimaya in the International District.

This year’s candidates for Washington state governor are Bill Bryant and incumbent Jay Inslee. Bryant is the Republican nominee and last held an elected position as a commissioner for the Port of Seattle from 2008-2015. Inslee is the Democratic nominee, having held multiple elected positions since 1976 from local government to state government. Below you can read are candidates’ responses to the International Examiner‘s questions.

Public safety has become an increasing concern among our readers. How do you plan to address safety throughout the state and specifically for communities of color?

Bill Bryant: Getting our homelessness problem under control will improve public health and safety. This is a major issue in Seattle’s Chinatown/International District and in communities across Washington State. Over the last four years, the number of people living on the streets without proper care for mental illness and addiction has exploded. Under Gov. Inslee, homelessness funding has doubled, but the problem has gotten worse. What Gov. Inslee is doing is not working.

Before running for office, I was a volunteer night manager at a homeless shelter. Working with the homeless taught me that many people lacking shelter have jobs or want work and are trying to put their lives together.  Others, particularly many who reject shelters and live in tented camps, need medical, mental and behavioral health (drug addiction) services.

Relegating the most vulnerable to the margins of society by enabling them to live in tents is not compassionate; it is cruel. It denies them the services they need and it undermines public health and safety.

I will not wait to be sworn into office to act on homelessness. During the transition, I plan to convene a conference of local officials, mental health experts, law enforcement and homelessness advocates to form a statewide plan to address homelessness. As governor, I will have a zero tolerance policy for people living in tents and boxes on state property. And, I am committed to rebuilding our state’s mental health system.

To also keep dangerous people off the streets and treat their illnesses, we need a mental health system that works. Right now, Washington is ranked 50th for adult mental health care; 47th overall. Under Gov. Inslee, our state’s largest mental health facility has failed four federal audits and had dangerous patients escape. As governor, I will embrace the bipartisan mental health reforms that Gov. Inslee vetoed and expand pilot projects across the state that are already integrating primary and behavioral health care at the community level.

I see the mental health and homelessness problem as one of the biggest public safety concerns for Washington and, as your governor, I will lead a turnaround of the last four years of failure and excuses.

Jay Inslee: I understand this concern and I can tell you that as governor I have worked hard to empower communities and to work with law enforcement to ensure neighborhoods are protected. The gun violence we’ve experienced in recent months and even over the last few years is heartbreaking. In the face of such violence I believe that inaction is unacceptable, we must say enough is enough. That’s why I will be supporting I-1491 on the ballot this year to ensure that those with family members they fear may be a danger to themselves and others can seek an extreme risk protection order to make sure that family member does not gain access to a firearm. I’ll also continue to work with legislators on adopting common sense measures to reduce gun violence across our state.

But gun violence isn’t the only challenge we face in public safety. We are investing in better training to ensure that officers approach their role more as guardians of a community and less as warriors. The work that our Criminal Justice Training Center Executive Director, Sue Rahr, is doing on this has been nationally recognized, including by President Obama. I will continue to fight for further investments in this kind of criminal justice training to ensure we can get more and better trained officers working with communities of color throughout the state.

Finally, I pushed for a package of reforms to improve our criminal justice system in Washington. As governor, I pulled together the Justice Reinvestment Task Force and proposed the Justice Reinvestment Act to ensure smarter use of data and resources throughout our criminal justice system. We’re still working with law enforcement and legislators to find a path forward on this, but I believe that when we do, it will make a huge difference for neighborhoods and law enforcement officials across the state.

How do you approach making a deal and why do you believe this strategy is effective?

Bryant: I have spent my career helping negotiate international trade agreements for Washington’s agricultural products. To conclude a successful deal requires building a coalition of people on different sides of the issue, who have different interests, but who want an agreement. The different groups often want an agreement for different reasons, but the motivation to reach agreement keeps the parties at the table negotiating. That is the approach that has worked for me in the private sector, and it is how I will work with the legislature in Olympia.

Inslee: Though divided government can be challenging, I believe it really puts you to the test as a governor to show that you can bring disparate parties together to the table and actually get something done. I’m proud that throughout my first term there are many examples where I worked with both parties to get great things done for Washingtonians. I’m particularly proud that by convening Democrats and Republicans and never giving up on the possibility of a deal, we finally got a transportation package passed last year to help mitigate the traffic we all struggle with.

I hosted those negotiations starting in 2013 and kept working with all parties at the table to reach a deal. When it looked like a deal was dead, I proposed my own package to re-launch negotiations in December of 2014. Finally in 2015, when it was clear that the only path to a deal meant I would have to swallow the Republicans “poison pill” to keep me from pursuing a particular piece of my environmental agenda, I put the greater good of the state ahead of that one priority and made the deal. Something Republicans and Democrats alike credit as being essential to passing that package.

Lastly, anything you’d like our readers to know (about you, your campaign, etc…)?

My background is in business. I built a company that operates on both sides of the mountains, that helps Washington’s farmers export their crops. I pull people together and fix problems.

Here’s what I’ll do as your governor: 1. Give every kid an equal chance to get ahead by funding and innovating schools. 2. Reinvent high school by including pre-apprenticeships for those not college-bound. 3. Reduce traffic jams by emphasizing capacity, better roads and efficient transit. 4. Rebuild the state budget from zero, reexamining every agency, tax incentive and program. 5. Put a moratorium on new regulations until current ones are justified or eliminated. 6. Preserve working farms and forests; restore salmon, steelhead and orca populations.

My agenda isn’t ideological, it’s not partisan. It’s about us, pulling together, so people can get good jobs here, afford houses, raise families and retire here in this natural beauty we all love and want to protect.

Inslee: I’m running for re-election because there’s no greater job than waking up and fighting for Washington state and its values. We’ve made major progress on the issues we care about as Washingtonians over the last four years, such as creating good-paying jobs, improving our education system, fixing our roads and bridges, and fighting climate change. But I won’t be satisfied until everyone in our state has the opportunity to reach their full potential in a more diversified and growing economy, until every student has access to a quality education, and until we protect our state and future generations from the threat of climate change. We have more work to do.

As I travel across our state, I get to meet people every day trying to do the best they can for their families. I meet parents who are trying to send their kids to college and stretch every dollar in a changing economy. I meet seniors and those nearing retirement are worried about just how secure and healthy that retirement will be.

I’m running because I want to be a champion for those families.