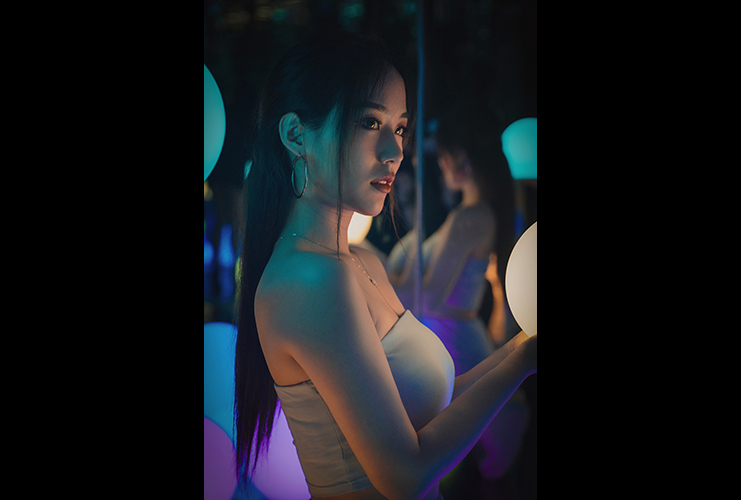 Woon Ji Kim is a producer and a DJ with the stage name “DJ Accia (ah-chee-ya)”. She’s an award winning pianist in Korea, and for the last five years she’s been exploring the DJ scene in Seattle. She’s a regular pianist at Canlis, is the Mariners’ 2022 Resident DJ at the T–Mobile Area, and soon, will be playing at the CID Block Party on Aug 20th. (Disclosure: The International Examiner is a sponsor of the CID Block Party). DJ Accia talked to the IE about how her background as a classical pianist has influenced her DJing.

International Examiner: How do you pronounce your name and what does ‘Accia’ mean?

IE: Can you do a quick intro to share a little bit about who you are and what you do?

DJ Accia: My name is DJ Accia, and I am from South Korea. I’m an active DJ in Seattle. I also work as a pianist during the day time because my major was classical piano at a music school and I studied music for more than 10 years. I’ve grown up and been surrounded by music. So I came here to Seattle to learn more music, and I started DJing.

IE: How did you find DJing?

DJ Accia: My husband! I was studying music and he was already in the music industry. I already spent so many years in the music world, but he taught me DJing.

IE: What are your favorite genres to play?

IE: What intrigues me is that in addition to being a nightclub DJ, you are also a talented classical pianist. I was wondering if you’d speak to how they influence one another, or rather do you see these two mediums for music expression differently?

DJ Accia: It’s pretty similar. Especially how piano is the basics of everything in music. So I learned DJing really easily because I played piano. When my husband taught me how to DJ, I was able to understand everything because I knew a lot of musical theory. So I just had to practice how to use the equipment, and it only took a week to master it.

IE: Do you have any plans to incorporate classical music into your DJ sets?

DJ Accia: Yes! That’s what I always wanted to do. But it’s hard because I also produce music, which takes all my time. I think I’ll be able to do that when I master simple stuff. So then, I can put classical stuff when producing with an EDM style. So yup, I’ll always try! Hopefully in the near future.

IE: Who are three of your favorite classical musicians?

DJ Accia: Chopin, Rachmaninoff, Liszt. These three are all from the Romantic period.

IE: What makes a good crowd? What are your favorite stage moments?

DJ Accia: I don’t make playlists. Because the crowd is always very different. Instead, I see the crowd and read the crowd, and then choose what to play. When people react really good, like people singing alone or people jumping really high – that’s the best.

DJ Accia: I’ll be performing at the mainstage for Boo! Seattle at the Wamu Theater this Halloween on October 28th. This gig will be very big for me since I am going to open for many world famous top 100 DJs.

This interview has been edited and condensed for clarity. Catch DJ Accia’s live performance at the CID Block Party on August 20th, from 3PM-9PM.