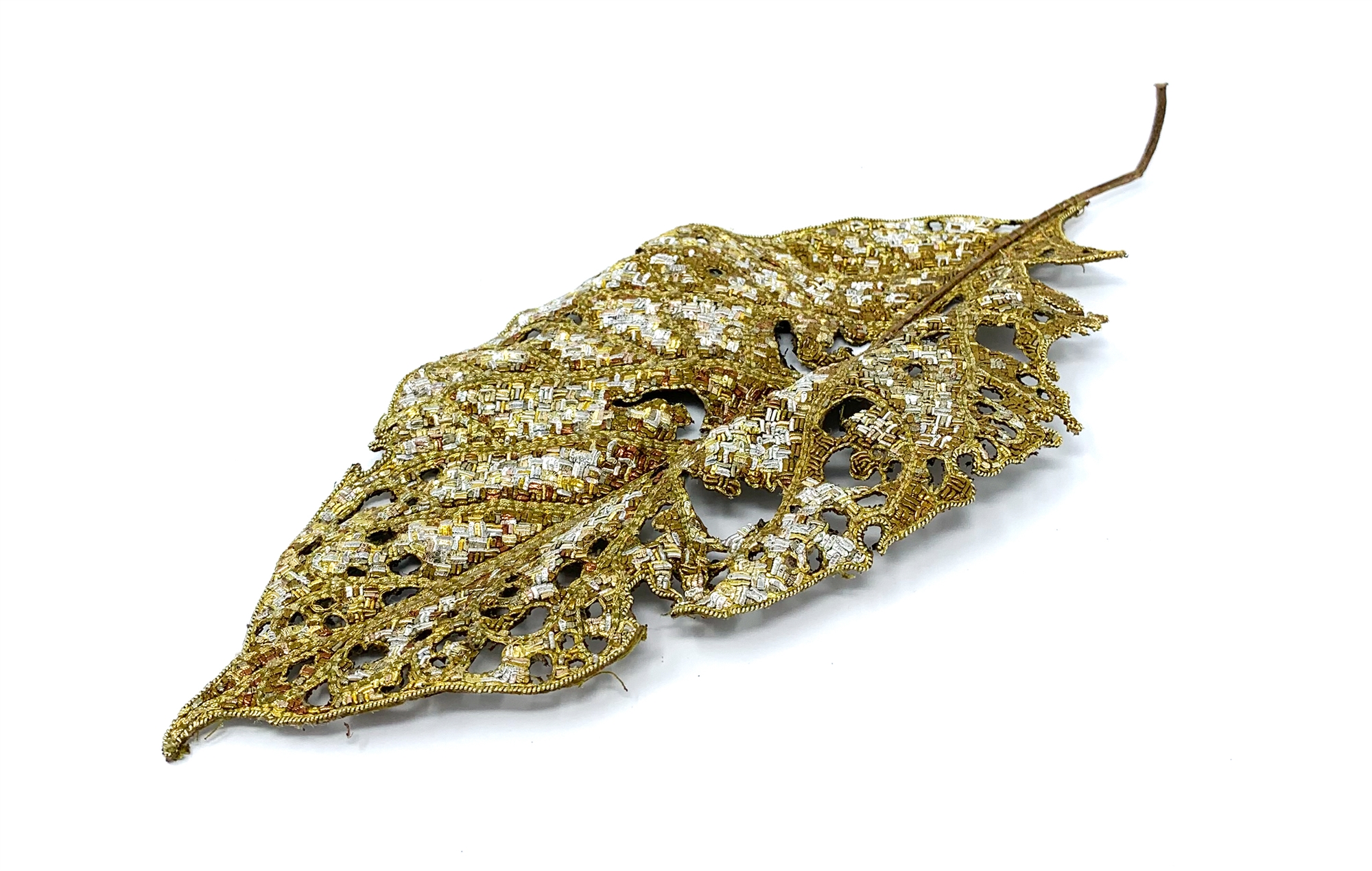 Throughout July at ArtXchange Gallery, stunningly intricate hand embroidered leaves, papercut and stencil works, and more were on display in The Impermanence of Life, a solo exhibition by Prince Tiao Nithakhong Somsanith. Coming from Lao loyal lineage, Somsanith takes the royal traditional Lao art form of gold and silver metal embroidery and creates modern interpretations. He does this by translating the practice of embroidery onto fallen leaves acquired during his daily walks outside of his home. While Somsanith had shown works in the Pacific Northwest in the past, this was the first time any of his works have been available for sale and private acquisition.

Inspired by nature and the environment around him, Somsanith acquires fallen leaves, often riddled with holes, tears, and imperfections, and miraculously transforms these fragile leaves into breathtaking sculptures. The final product, a fully embroidered leaf in precious metals, exudes an air of royalty and magnificence. For Somsanith, the leaves symbolize the fragility and fleetingness of life. By embroidering the works, it highlights not only the idea of life’s impermanence but also of the temporary beauty of nature. Embroidering the previously decaying, imperfect leaves transforms them into an object that has then evolved into an exquisite sculpture that breathes new life.

Aside from embroidered leaves, Somsanith’s dedication in preserving Lao culture and traditions is also demonstrated in his large cut-paper and stencil printed scrolls. Images found in historical mural paintings at Vat Had Sieo, a Buddhist monastery found in the UNESCO World Heritage protected area of Luang Prabang, Laos are replicated throughout Somsanith’s large paper works. Displayed on these paper works include scenes of courtly entertainment, Buddhist gods, and decorative patterns and motifs.

For Somsanith, as a child growing up in Luang Prabang, Laos in the 1960s, he was surrounded by sophisticated, aristocratic arts such as painting, lacquer, embroidery, and dance. While embroidery was considered work for women, he still apprenticed until he achieved the status of a mo, or gold embroidery expert. After being exiled to France in the 1980s, Somsanith was then able to return to Laos in the mid-2000s and has since committed his time to preserve and perpetuate the cultural and artistic heritage of Laos.