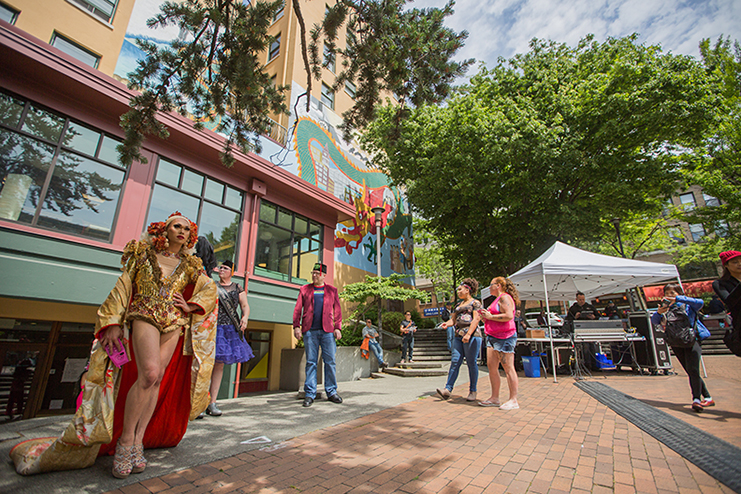 Aleksa Manila, the founder of Pride ASIA, has played an important role as a community advocate for many years now. She was born and raised in the Philippines and says she always felt a little different, not knowing why. She moved to the United States in her early 20s, and it was then that she found her identity as LGBTQ. Then in 2001, she debuted as a drag queen, winning Miss Gay Filipino pageant.

Aleksa also works in public health, which was how she ended up migrating her interests into serving the LGBTQ community. She landed a job in Seattle as a community facilitator in HIV research for a national study called YAMS – the Young Asian Men study. Here she was introduced to LGBTQ API organizing and also the larger LGBTQ API presence. However, from the early 2000s into 2010, she felt that the community’s voice had quieted down. “I reached out to my personal community connections to rekindle that fire that warmed the LGBTQ API community here in Seattle,” she said.

This was the start of Pride ASIA, an annual gathering that celebrates, empowers and nurtures the multicultural diversity of the LGBTQ communities through the API American lens, as well as honoring all the LGBTQ API organizations that came before them. For many years now, Pride ASIA has worked with other organizations during Pride month (June) to raise awareness and hold space for the API queer community. However, many Pride events this year have been canceled due to the pandemic.

“The initial decision collectively was just to follow everyone and cancel,” said Manila, “but there was still such a cry, that need of finding a virtual space to connect as a response to hatred and violence…so we wanted to make sure to continue the tradition of doing pride Asia fest, even though it’ll be in a virtual space.”

Pride ASIA puts a focus on communing: whether it’s bringing people together over shared cuisines and food or coming together simply to celebrate their cultural roots. Now that people are encouraged to stay at home, the organizers figured that the best way to bring people together would be to host their annual pride ASIA fest online for the first time this year.

“The stay-at-home order is affecting not just the API community, but the community at large,” said Dutchess Drew, who is also a member of Pride ASIA. “There’s a large influx of depression and a change in daily life, so this is to hopefully bring some levity, bring some light to everything that’s going on in the community and bring the community together.”

This year’s virtual Pride ASIA will be on May 31st, also during the month of API Heritage Month, and it will include a virtual Q&A/forum, with a panel of speakers that will talk about various topics that relate to COVID-19 as well as the community, as well as performances throughout the event. There is also a survey online where you talk about how COVID-19 has affected people and what resources they may need – this is to give the community a voice and make sure that the topics they talk about during the forum would be relevant to people.

As Manila expressed her gratitude towards Drew’s dedication to Pride ASIA. “I feel very empowered as an individual,” said Manila, “seeing the beautiful ways that the membership comes together in times like these, and I’m very honored and humbled to be part of this collective.”

“Pride ASIA is such an important organization with such an important mission representing the API queer community,” said Drew, “I want to inspire another queer API person to be able to see what I’m doing and see that they can do the same: give back to the community and be proud to represent their true identity and culture.”

For more information about the upcoming Pride ASIA fest, please their website and/or visit the Facebook event page