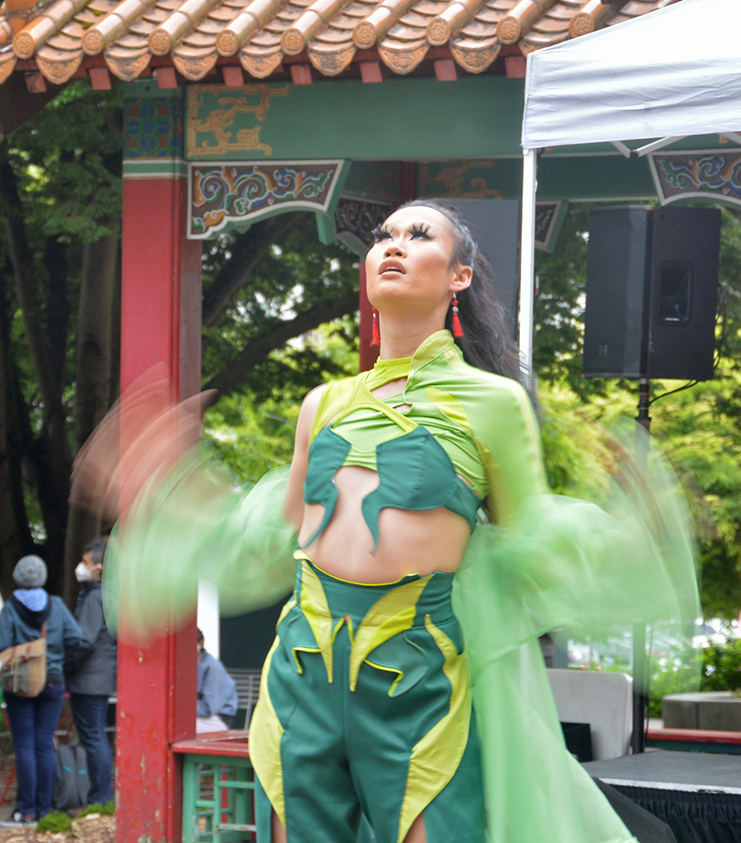 Pride ASIA was co-founded in 2012 by drag performer and social activist Aleksa Manila. Its mission is “to celebrate, empower and nurture the multi-cultural diversity of the LGBTQ communities through the Asian Pacific Islander lens.”

Pride ASIA Fest went virtual for the past two years of the pandemic, but returned to Hing Hay Park just in time for its 10-year anniversary. Catching the tail end of May, which is Asian American and Pacific Islander (AAPI) Heritage Month, the celebration also kicked off Pride Month in June.

For Manila, the excitement of seeing people in person again was a focus of Pride ASIA Fest this year. The pandemic highlighted the challenges facing AAPI LGBTQ communities, as well as their strength, she said.

Joël Barraquiel Tan delivered the festival’s keynote. Tan is the new executive director of the Wing Luke Museum, and the first Filipino and queer person to hold the role. Tan shared a story from his activism as a youth.

He spoke of the late Indian American queer and gender rights activist Urvashi Vaid, who passed away on May 14. Tan met her in 1992 when he organized a large group of queer Black, Indigenous and People of Color activists to disrupt the National LGBTQ Task Force (then known as the National Gay and Lesbian Task Force) conference in Los Angeles. Vaid was the conference’s keynote speaker, and Tan’s coalition was protesting white supremacy within the LGBTQ community. After Tan’s group marched into the ballroom where Vaid was speaking, Vaid yielded the group’s demands and let them speak. Tan said his group succeeded in centering the priorities of the conference around racial equity, and the next year Vaid invited Tan to be the Task Force’s keynote speaker.

“This gracious gesture taught me an essential lesson about queer kinship and belonging,” said Tan. Vaid, he said, opened the door to the work he is doing now.

“Urvashi and other queer forbears were brilliant and tough as nails. I say they were anti-fragile,” Tan said. “Anti-fragile is the exact opposite of fragile. It is resilience 2.0. Where resilience is about bouncing back from adversity, anti-fragility is when adversity and stress make it so you just come back stronger, better, more badass. I want this anti-fragility for us. I want that for our village.”

Sepanta Bahri, a queer immigrant from Iran, sang in Persian with his guitar. “Spread the kindness, spread the love,” Bahri said to the spectators. “Be generous to others while you’re alive.”

Dutchess’s drag persona is informed by her Sri Lankan heritage. “A lot of my drag persona, my drag aesthetic is very Indian Bollywood inspired,” she said in an interview before Pride ASIA Fest. “I slowly brought out Dutchess’s persona of being this like, Bollywood goddess.”

Putting on Pride ASIA Fest virtually for the last two years was valuable, Dutchess said, but doesn’t compare to the excitement of this year’s celebration. “Being back at Hing Hay park is, I think, a very special place for Pride Asia,” she said. “It’s a unique space to have a drag performance. So I think it creates a unique opportunity for some of our performers.”

Pride ASIA is important for its representation of the diverse Asian American and Pacific Islander communities, Dutchess said. “To me, it comes down to identity and just being proud of who you are, especially in a time where there’s been a lot of hate and discrimination and just being Asian,” she said. “I think that’s the biggest part of Pride ASIA is the community that we create and bring for individuals to be authentically themselves.”

Manila echoed this thought in an interview in the weeks before Pride ASIA Fest. “We want people to just be themselves out and proud as an LGBTQ AAPI person,” she said. “Because who knows, there might be a young person in that crowd, who is so afraid to see themselves fully. If they could see a reflection of who they are through Pride ASIA Fest, my gosh, my heart would be warm.”

For multidisciplinary artist Kince de Vera, the most important parts of Pride ASIA’s mission are celebration and empowerment. “The API lens is a very unique set of experiences, and being able to explore your queerness and identity through that lens is a very, very valuable thing,” de Vera said. “Because in a lot of our cultures, there’s deep-rooted, anti-queer history. And I think that that’s where a lot of people find value and importance of the work we do and significance, is that they are truly allowed to be themselves and be part of a chosen family that loves and accepts them for who they are.”

A queer Filipino immigrant, de Vera has regularly performed at Pride ASIA-related events for the past ten years, using dance, performance art, singing and songwriting to explore mental health themes. He created a triptych of solo performances on suicide and survival using paint as a medium of expression. “I also realized that there was a very healing process to that tactile experience of being able to kind of temporarily experience that emotion and wash it off,” de Vera said. His work with Pride ASIA allowed de Vera to create a workshop helping people process repressed emotions that they hadn’t given a name.

For drag performer Gaysha Starr (Miss Gay Washington and Miss Gay Filipino Emeritus), celebrating LGBTQ AAPI communities means different things as the years and generations go by, from addressing lack of representation and breaking stereotypes, to raising awareness about anti-Asian hate. “We are individuals, and we’re not just one collective of Asian and Pacific Islander,” she said.

Starr started performing drag in 1993, and for a while was one of the few Filipina drag performers in Seattle, until her friend Manila and others started performing. Starr said her style incorporates pageants and female impersonation in a slightly larger-than-life manner, with bright clothes and big hair and a persona on the mic that’s “usually somewhere between a little naughty and a little nice,” she said. As an emcee, she strikes a balance between educating and entertaining people.

“I just think drag is for everyone,” Starr said – and representation, sharing stories and experiences through dance, music and art, is important. “I’m lucky to have moved and evolved and to have generations after me continue to still invite me to the party.”

A couple hours into Pride ASIA, it started pouring rain – a rare occurrence for the annual event. It did nothing to stop Starr, dressed in a black and metallic suit, from twirling and passionately lip-syncing to “I Wanna Dance With Somebody” by Whitney Houston.