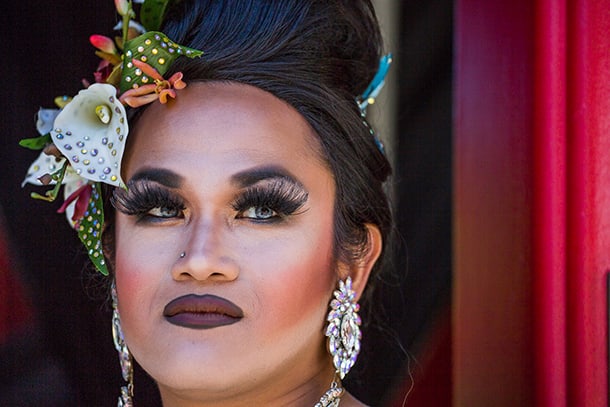 Words and Photos by Carolyn Bick

It took Jill Mangaliman almost 40 years to come out as genderqueer to their family.

While Mangaliman’s coming out story has a happy ending – not only did the Filipinx-American’s family accept them, they continue to support them – this isn’t true for all Asian American and Pacific Islanders (AAPIs). This is why Mangaliman thinks events like the Pride Asia festival are so important. They were this year’s keynote speaker at the festival, which took place in Hing Hay Park on Sunday, May 27.

Part of the reason it took Mangaliman so long to come out is because they didn’t know what their parents would do, say, or think. For the first several decades of their life, even though they have queer family members, it was easier for them to simply avoid difficult conversations altogether. But acknowledging their sexuality made them realize they couldn’t avoid the conversation forever.

“When I found the queer community, I was really happy. I didn’t want to live a double life,” Mangaliman said in an interview before the festival. “[I didn’t want to] separate or compartmentalize my life. I want to be with all my loved ones – my family, friends, my community. And it’s exhausting, when you try to silo parts of your life.”

But even after Mangaliman acknowledged their sexuality, it didn’t mean they automatically had access to the queer AAPI community. They said that, in their personal experience, it’s been hard to find that community in Seattle. And even when one finds that community, and wants to make new familial ties, it’s not as though LGBTQ+ AAPIs can just leave their biological families behind – regardless of whether or not those families support them.

“We have such a strong bond with our family, it’s not like we can break up with them. It’s very intertwined in our history and our culture to support our family, even when our families aren’t supporting us,” Mangaliman said.

And while Mangaliman believes the Internet has made it easier for the younger generation to come out, this doesn’t necessarily mean it’s in an encouraging environment. Another aspect of the issue is that there is “a lot” of violence and silence in the AAPI community, when it comes to queer community members, Mangaliman said. However, they noted that the only harassment they had ever personally experienced was in the Capitol Hill neighborhood.

Still, Mangaliman’s experience is not the norm, which is why organizations like API Chaya host events like Queer and Trans People of Color Dim Sum, in order to start to foster a dialogue within the AAPI community around acceptance and visibility. It’s also why the festival itself is so important: “we are here, and [it’s] a way for us to … break that silence.”

Between announcing acts and speakers on Sunday, festival founder Aleksa Manila echoed Mangaliman. The Filipina woman is a drug counsellor and drag queen, and, as a passionate advocate for LGBTQ+ rights and visibility, founded Pride Asia seven years ago.

While she is proud of her contribution to this visibility, Manila said she wanted to acknowledge that the festival builds on the work done by other AAPI organizations in the past, like the Asian Lesbian and Bisexual Association (ALBA) and Queer and Asian (Q&A).

“I think it sort of represents how the makeup and the history … of the queer API movement in the Seattle and Northwest region has gone through lots of changes,” Manila said. “I think that, time and again, we … bring forth visibility for queer APIs, not just politically, but from a social justice perspective.”

She also said the festival and visibility events like it are important from the standpoint of celebrating diversity.

“I think that when we talk about the gay community … we often disregard how diverse our community really is – by sexuality, by ethnicity, by gender, by race, and I think when we have organizations like Pride Asia, it reminds folks that, ‘Hey, you know, it doesn’t just stop there. It goes on and on,’” Manila said.

Marion Malena, an American Samoan who has won multiple beauty pageants, and who performed at the festival Sunday, said that race plays a significant role in her desire to participate in public events like Pride Asia. She said that “no matter how Americanized you are, people will always judge you based on your skin.” 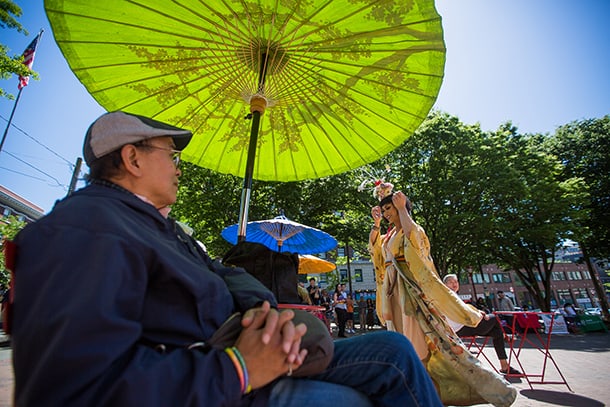