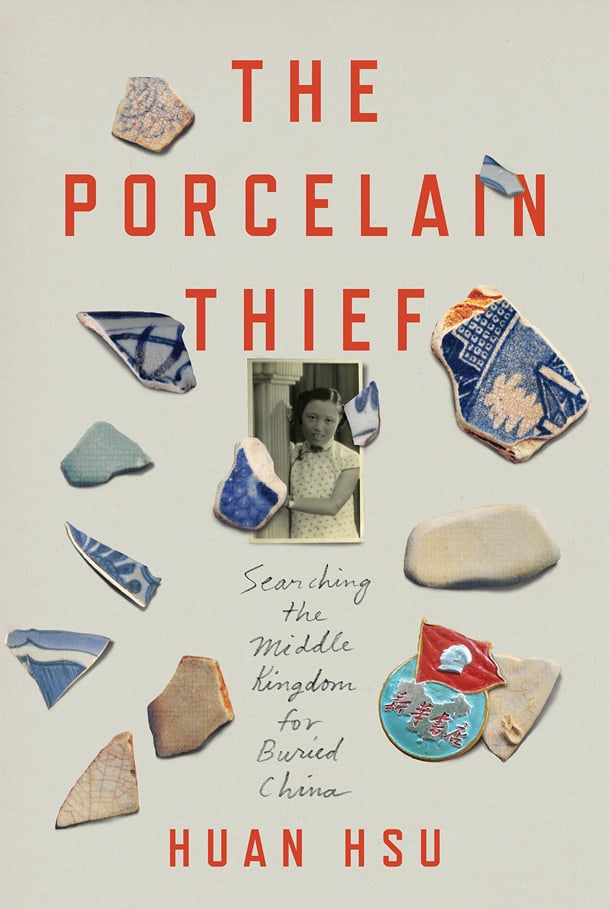 On a quest to unearth his great-great-grandfather’s Liu Feng Shu’s fabled porcelain collection, American journalist Huan Hsu embarks on a “long march” back to his ancestors’ native land. Hsu’s book, The Porcelain Thief: Searching the Middle Kingdom for Buried China, interrogates the ABC (American Born Chinese) experience in the motherland and the ineffable longing of second-generation Chinese Americans that seek to recover a connection to the past, and a lost identity that is not fully their own.

Hsu writes incisively on the challenges of being an overseas Chinese, or huaquiao (“Chinese bridge”) and the attitudes and biases that he encounters, which continually remind him of status as an outsider. His co-workers refer to him as Bruce Lee, when he refuses to take an English name. At a funeral for a beloved relative, Hsu finds his name recorded incorrectly in the family registry. Confronted with his own alienation and disassociation from a sense of being Chinese, the pain of Hsu’s frustrations pervade his writing. Marked as foreigner to native Chinese, yet invisible to other Americans, the author is caught between worlds in circumstances where it is impossible to feel fully at ease.

As a journalist, Hsu is a critical observer of contemporary Chinese culture and comments on everything from digital piracy, food safety, religion, Chinese factory conditions, and urban planning and design, while documenting the many ways in which China assaults his senses on a daily basis. “China was people taking an eternity to use bank machines, bathrooms with hot-water taps that didn’t work, soap dispensers that never had any soap, and long, gross-looking fingernails that served no apparent purpose.”

Hsu’s resentment leads him to lash out in inappropriate ways. He asserts his personal space by shoving innocent subway riders and provoking traffic disputes, which, in one terrible instance, results in Hsu getting a thorough beating.

But readers may grow to empathize with Hsu’s character. His older cousin Andrew relentlessly ridicules him for his cultural illiteracy—Hsu can never be fluent in Mandarin or Chinese enough. Hsu can’t connect to the religious devotion of his Christian relatives but endures long and tedious hours of religious testimony, in order to piece together the story of his family. He seeks out and interviews a number of his relatives in both China and Taiwan who offer him conflicting accounts of what may have happened to his great-great-grandfather’s porcelain collection.

Eventually, Hsu’s journey takes him to Xingang where he puts on a desperate yet persuasive performance of filial piety that grants him permission to dig up his ancestral land. The terms of agreement involve temporarily planting trees to beautify the land, which must be promptly removed once photos have been taken. In a ridiculous and heart-rending scene, Hsu snaps at his translators and guides to let him do the digging. He takes a pickax and opens up several shallow holes where he places camphor and loquat trees into the ground. Unfortunately, if any buried treasure exists, it’s three or four times deeper down in the earth.

Though Hsu never succeeds in fulfilling his desire to recover his ancestral patrimony, his time in China allows him to get to know his elderly grandmother, Liu Pei Jin, before she dies. He records the history of her life as the eldest child from a family of four daughters. She escapes a fate of bound feet and receives a Western education at a missionary school before continuing on to study at a top women’s college. The many migrations through Liu Pei Jin’s life take her from Nanjing to Shanghai to Taiwan and eventually America.

The Porcelain Thief reaches back into hundreds of years of Chinese history and decades of political upheavals to tell the story of China through Hsu’s ancestors. Though the book travels back and forth between the past and present and multiple family storylines, the strongest parts of Hsu’s book narrate his own experiences as an ABC struggling to find personal meaning in being Chinese, through embracing the complexity of his family’s histories.