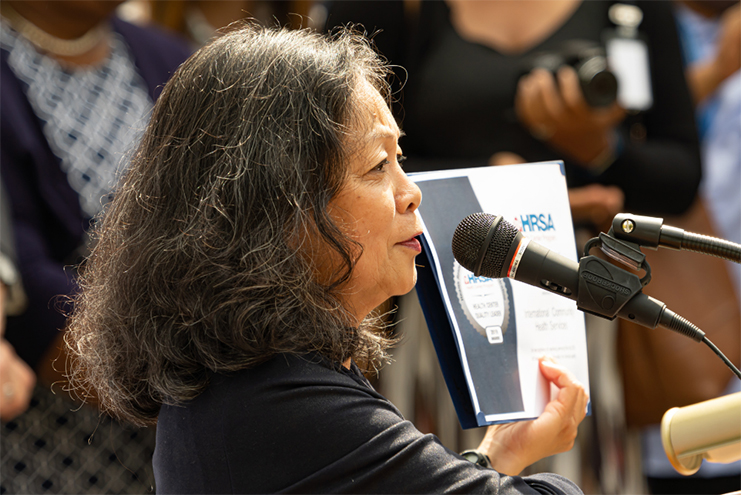 Teresita Batayola plans to retire as CEO of International Community Health Services (ICHS) in December 2022, after 18 years leading the state’s largest Asian American and Pacific Islander healthcare non-profit, which now provides affordable, culturally and linguistically competent healthcare to immigrants and refugees from around the world.

Under Batayola’s leadership, ICHS expanded from two health centers in the Chinatown International District (CID) and Holly Park to 11 sites in Seattle, Shoreline and Bellevue. She helped ICHS weather the COVID-19 pandemic, which forced the organization to furlough a third of its staff when patient visits ground to a halt.

Batayola said she feels ready to hand the organization to a successor. The ICHS Board of Directors assembled a search committee for a new CEO, and will also get input from a community advisory group.

At the beginning of February, Batayola will offer her expertise to the White House, as one of 25 leaders selected for the President’s Advisory Commission on Asian Americans, Native Hawaiians, and Pacific Islanders. The commission will help the executive branch on policies to prevent and document anti-Asian hate incidents, and to improve health, economic and educational disparities among Asian American (AA) and Native Hawaiian and Pacific Islander (NHPI) communities.

Batayola’s public service career included stints in local and federal government. Her pathway to leading ICHS was no straight line.

Batayola grew up in the Philippines and came to Seattle in 1969 with her parents and two younger siblings, Maria and Louie. Maria embarked on a career in theater, community advocacy and environmental justice activism, while their brother Louie, who passed away in November 2021, worked for the Seattle Fire Department for 37 years. Teresita is the mother of two daughters: Ariana and Gabriela. She and her husband, Dionnie Dionisio, met in 1985.

Armed with an aeronautical engineering degree, Batayola’s father hoped to work for Boeing, but the family arrived during the Boeing Bust, when the company was laying off workers and verged on bankruptcy. “Will the last person leaving Seattle – Turn out the lights,” portended a billboard in 1971.

Unable to find a job, Batayola’s father retrained to become an industrial plumber. “During that transition it was very hard for our family to make it,” Batayola said. For several years, “all the kids had to figure out how to get jobs to help out the family, which is typical in Asia,” Batayola said.

One day, Batayola’s parents convinced her to help Sister Heide Parreño, a nun and nurse practitioner who was applying for a federal grant. Parreño helped start an early iteration of ICHS. She tasked Batayola with collecting data, interviewing Filipino elders living in SRO hotels in the CID and Pioneer Square.

The men lived isolated in their small hotel rooms. “It was really impressed on me how, as awful as what we were going through as a family, that there were people who were experiencing worse conditions,” Batayola said. “They were interested in learning more about my family and learning more about me, as if I was a lost daughter or a lost niece. So that really opened my eyes.”

During their struggle, Batayola’s family found refuge in the Chinatown International District. Russell’s Meat Market provided cheap cuts of meat and bones, and at Wa Sang grocery, customers could buy what they needed and defer payment. Later, “the ID continued to be my heart, if you will, in terms of a cultural home, an accepting place of who I was and am now regardless of my background and experience,” Batayola said.

As a student at Seattle University, Batayola worked part-time at the Bon Marché selling nylons and tried to graduate fast, knowing it was hard for her family to afford tuition. During her early career, the need to help her family financially made her practical: Get a good job, then a better one.

Between college and grinding at a low-wage job, she also volunteered in the community and was active in Asian American and Asian American women’s movements. She met civil rights leaders like Bob Santos and Dolores Sibonga. Her biggest influence and mentor was Ruth Woo, who preferred to work in the background, opening doors for others. “I feel very grateful that there were those early community leaders who became part of my life,” she said.

Joan Yoshitomi and Batayola became friends early in their careers when they helped start an Asian American women’s group. “I think when I first met her I was just awed by her being such a tiny person but she was so big, so strong, so charismatic,” Yoshitomi said. “Opinionated but yet very kind.”

After earning an MS in urban administration from Bucknell University, Batayola realized she wanted to work in public service, not the private sector.

She worked for the state, the federal government, for four Seattle mayors, as chief of staff for City Council member David Della, and for a World Bank project in Indonesia.

The network of community activists and leaders she kept in touch with later helped her succeed in leading ICHS, Batayola said.

Filipinia American activist and author Juanita Tamayo Lott met Teresita in the late 70s in Washington D.C. Lott was director of the Office of Asian American Affairs in the Office of Education, and Teresita was completing an internship. The two bonded over their Filipina American experience, and kept in touch.

Tamayo Lott was amazed and slightly horrified when Batayola drove across the country by herself. “She knows herself, her values are really core, she’s not afraid, but she’s this very wise, astute thinker,” Tamayo Lott said.

“I really connect with her because we do have these commonalities of being a woman, a minority woman, with backgrounds in a colonized situation like the Philippines, and having to make America come true to its promise, and you serve all the people,” Tamayo Lott said. “But also fun, that we know how to have fun. We know how to joke.”

One of Batayola’s first consultant projects after leaving her career at the City was helping ICHS develop its strategic plan.

ICHS was founded in 1973 in the CID, to provide culturally-appropriate healthcare for low-income Asian immigrant elders in the neighborhood they lived in. Community advocates including Sister Heide Parreño, Bruce Miyahara and Bob Santos started the Asian Community Health Clinic in Beacon Hill, which was staffed by volunteer doctors, mental health care specialists and interpreters, in a space donated by Dr. Eugene Ko.

Batayola joined ICHS to help the organization open its Holly Park clinic, intending to stay for six months. This stretched to nine, and then appointment as executive director.

By 2006, Batayola became ICHS’s permanent executive director, and later CEO and president as the organization expanded. At first she thought she’d stay only two years, but like many who work there, was drawn in by the mission.

She joined at a difficult economic time, as Ron Chew writes in his memoir My Unforgotten Seattle. There was fear that ICHS might lose state funding, forcing the CID clinic to close.

As housing prices rose in Seattle, the community ICHS serves moved to more affordable suburbs to the north and south. At the same time, immigrant and refugee communities from across the world continued to diversify the area.

After assessing the needs of patients and underserved communities, ICHS developed the vision that patients should not have to come far for care.

This attention to the experiences of patients is why Batayola expects ICHS facilities to look welcoming, and be in good “if not excellent” shape. “Because our patients go through extraordinary challenges in their lives,” she said. “They may have had the hardest time to even get to care. They are probably sicker than they should be before they finally decide to get to care.”

Seeing a lack of major community health clinics in Shoreline and Bellevue, in 2011, ICHS launched a capital campaign to raise money for a new medical dental clinic in Shoreline.

When Ron Chew was tapped to work as director of the ICHS Foundation, he agreed because Batayola was the only nonprofit leader he wanted to work with.

“She is a fearsome and fearless presence,” said Chew, who held the role from 2010 to 2020. “She’s someone who has enormous influence in the political, cultural, community healthcare spheres. And there’s no one else like her. I think she casts a shadow over each and every arena that she operates in. She built ICHS into a national healthcare organization that is unparalleled.”

Yoshitomi attributes Batayola’s achievements to her team-building and leadership. “She hires great people but she doesn’t micro manage them, she lets them do where they’re the strongest in their talents,” Yoshitomi said. “She’s not a person that’s struggling for attention. She lets her talents show but she’s not out there boasting about it.”

In February 2020, ICHS was the first community health center in the country to receive a positive COVID-19 case, at its Bellevue clinic. At the time, the CDC had no guidelines, and testing was not available. ICHS acted quickly to keep staff and patients safe.

During the pandemic, ICHS operations were almost brought to a halt as fewer patients came in for visits. Some 30 percent of the staff were furloughed. ICHS started pivoting to telehealth for most patients.

ICHS has many elderly patients who live in the CID, and the neighborhood’s nonprofits quickly worked together to check on their wellbeing, provide information and deliver food. “It was just an amazing effort,” Batayola said. ICHS set up drive-through testing, pushed for vaccine equity, set up vaccination sites, and is now distributing free rapid test kits.

Some things give Batayola hope when it comes to healthcare access for marginalized people. She thinks “Seattle and King County are unique in their embrace of all peoples,” though far from perfect. When community health services suffered under Trump, local government helped prevent devastation.

“The negative side is, we still have a long way to go for immigrants and refugees in terms of healthcare,” she said. “Basically, if they’re low income and they don’t meet Medicaid requirements, then they are out of luck, they’re uninsured.” ICHS and others advocate for the state to expand Medicaid coverage for immigrants and refugees, because even when people gain legal status, they need to wait five years before they can get Medicaid.

Batayola supports national expansion of Medicare. “Politics-wise it’s so divided nationally that I don’t know if that will happen. I really do think that without that, it is going to be very hard for health centers like us to continue, just because we are obligated and our mission says we serve everyone regardless of status.”

After ICHS, Batayola is looking forward to travelling more, connecting with friends over tea or on walks, and to “leave the rigors of a job that is really quite demanding.”

The job melded Batayola’s personal values with her professional goals, and involvement with the community.

“This has been my life,” she said. “It hasn’t been all that easy, but it has been a real joy to be able to be here and to work with amazing people, an amazing board, and to really realize that ICHS could grow and serve more and more folks. So it’s been a true gift for me.”