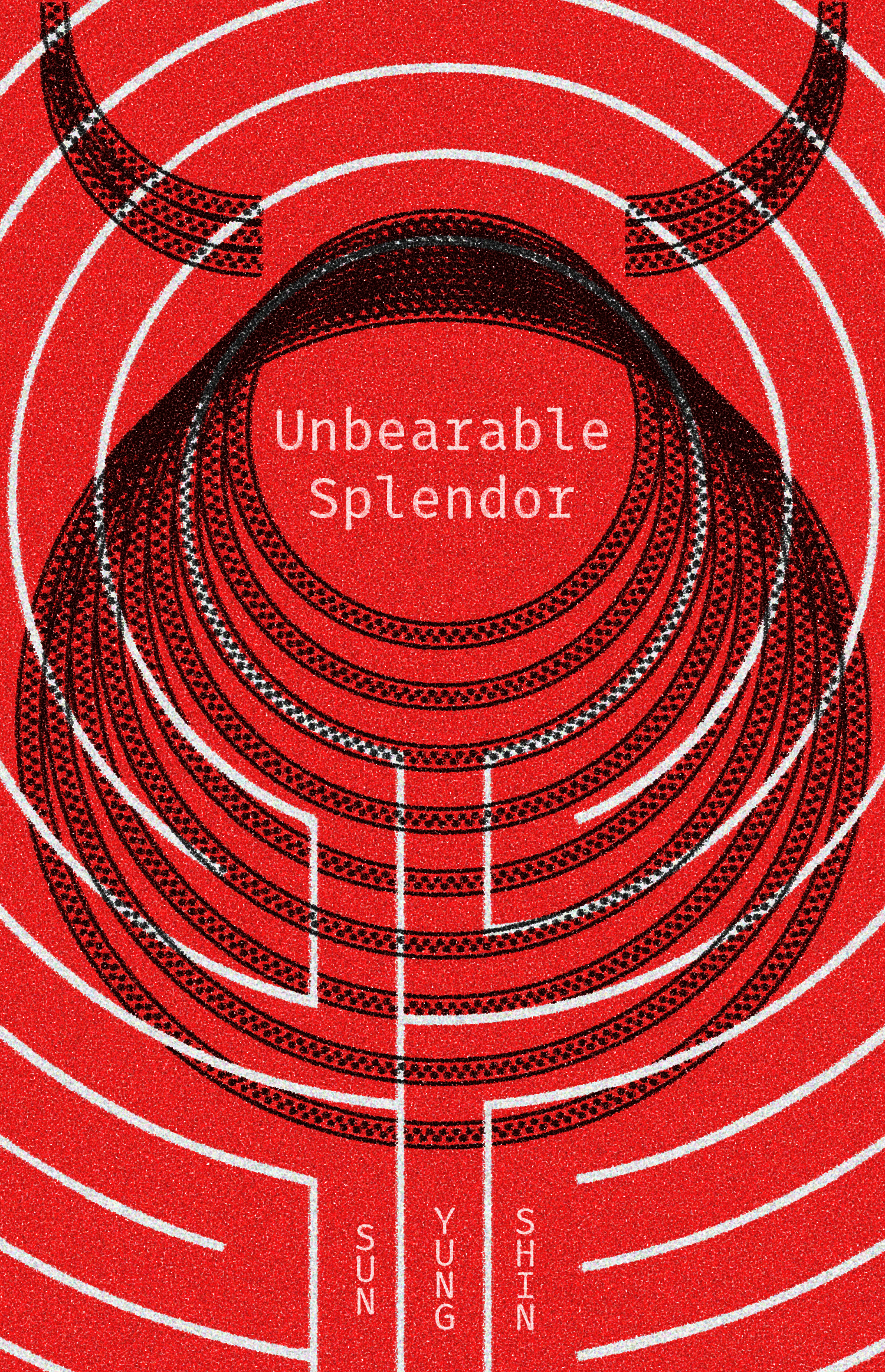 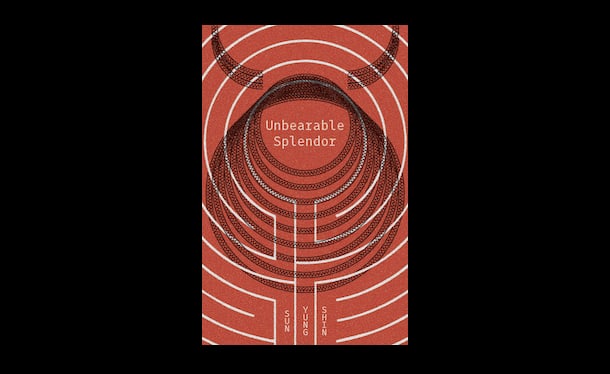 Unbearable Splendor by Sun Yung Shin (Coffee House Press) is a book of poetry that begins with a cyborg manifesto and a quote from the movie Blade Runner will always find a soft spot in my heart, but then it has to deliver. Sun Yung Shin’s Unbearable Splendor, a compilation of storytelling poetry and lyric essays, makes good on its promises. We explore with Shin—in graphs of the uncanny valley, in prose-poems that explore the liminal spaces of Pinocchio’s body, reproductions of adoption papers for a Korean orphan (last of their family), and an ad for candidates to become surrogate mothers.

Even the ancient Greeks make their appearance:

“Is Antigone the original cyborg?
The limits of woman, human. Everything put to the test.”

And a Turing Test applied to Eugene, the software program:

“Hurtling toward my milestone.
I am failing the human test and passing the machine test.”

At once sensual, philosophical, mind-bending in its juxtapositions, Shin’s exploration of what we take for granted—bodies, labels, time, and what it means to be human—crosses many intellectual landscapes at once. For those who like more traditional forms, or traditionally broken-line free verse—the lyrical prose still remains inviting, hinting at a formality by its rigor of thought. And for those who don’t care much for poetry, but want a beautiful space to explore modern and fluid ideas will find refuge here. Unbearable Splendor is a liminal book, but one that invites the reader to cross all its boundaries. 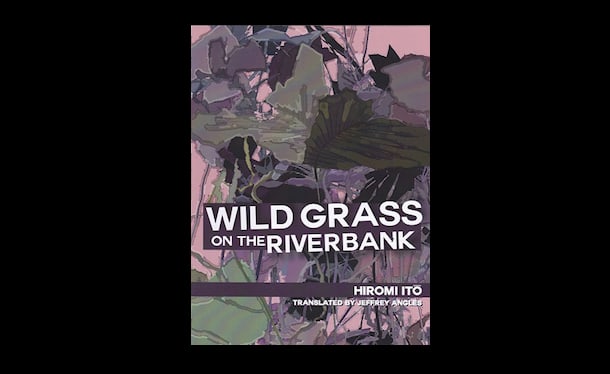 Meanwhile, Wild Grass on the Riverbank by Hiromi Itō, translated to English by Jeffrey Angles, (originally published in Japanese as Kawara Arekusa) offers a different kind of invitation: a book-long narrative poem of family dysfunctional and betrayal. Borrowing from the medieval Japanese travelers’ tales (sekkyō-bushi), Itō describes the trials of a family oscillating between two homes—an arid desert that seems suspiciously like California, and a lush, practically mythological riverbank full of sexual, poisonous, friendly invasive vines. There is the death and putrefaction and mummification of the stepfather’s body, the theme of the “bad passport” and the bad mother who is set on her own agenda, with the children as afterthought:

“Once again we were getting on board/ But no matter how many times we arrived, our journey still did not end.”

What makes this a modern poetic tale is the cadenced voice of the older sister protagonist, the narrator of the story. She is watchful as the mother copes (or does not cope) with life’s details. She can see the truth of the stepfather’s corpse’s deterioration even if the mother decides to stay in denial. She deals plainly with the stranger on the riverbank, and all the officials. Instead of the Japanese gods coming to the rescue (as would happen in sekkyō-bushi), it is the older sister who prevails to bring herself and her little brother to a happier ending.

In translating Itō’s poetry Jeffrey Angles has invoked a kind of incantatory language, repetitive and childlike, so that when words like “naturalize” or the Latin names of the plants the older sister speaks to/with/about are mentioned, it startles an English speaker as much as the katakana of the original breaks the mainstream Japanese. His notes are very helpful in understanding the context in which the original Japanese edition came out. Interestingly, Itō herself has high praise for this English edition, that it feels to her as though the original was written in English and the Japanese version that she wrote first, a translation. Where the father comes back from the dead with open arms, and the daughter persists. 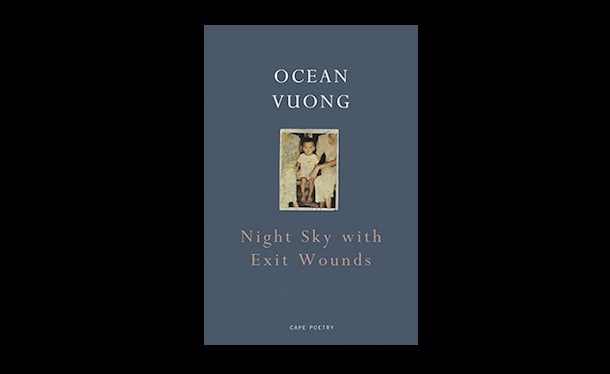 In Night Sky with Exit Wounds by Ocean Vuong (Copper Canyon Press), it is the son who persists amid all the memories of family and violence and sexual awakening. Many of these poems first made their appearance in high-profile venues over the last couple of years—The New Yorker, The Nation, PANK—and other literary reviewers have commented on Vuong’s mastery of the beautiful image and the ashier, gut-wrenching moment. What I’d like to highlight here then is the quiet zeroing in, the intrinsic heightening of feeling the Vietnam-born Vuong offers in his poems.

In “Always & Forever” the speaker, a young boy, is being awakened by his father: “ Open this when you need me most/ he said as he slipped the shoe box wrapped/in duct tape, beneath my bed…”

Then a quick shift to the modern-day awakening, no father present, the adult son taking out the gun from the box to see “if an entry wound in the night/would make a hole as wide as morning. That if/ I looked through it, I would see the end of this..” A lesser poet would stop there, satis ed to be drawing the parallel of early trauma and an insufficient father with the adult’s current despair.

Instead, Vuong takes us immediately back into the memory to make his point about guns, wounds and what happens after, and end the poem without punctuation:

“…the boy pretending / to be asleep as his father’s clutch tightens. / The way the barrel, aimed at the sky, must tighten / around a bullet/to make it speak”

With one gesture, we see the gun aimed not at the narrator, but the sky (a happier ending). We now must hold parallel the father’s hug and the metal barrel of the gun, and must see the son as the bullet, silently transformed by this ring into the speaker of the poem. Night Sky with Exit Wounds is a tour de force of evoked memory, heartache, and loss even as it affirms the persistent, present moment.