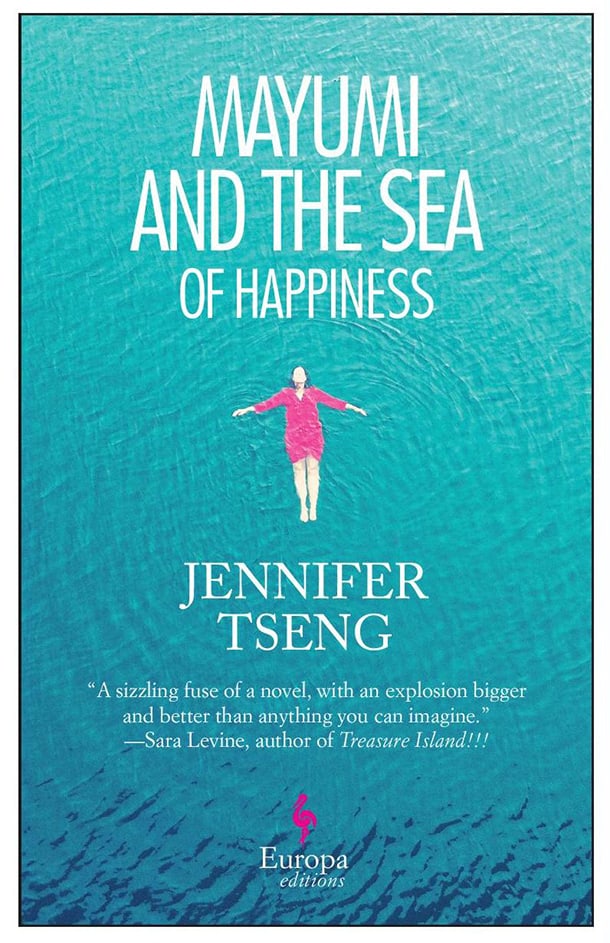 In a story about a 41-year-old married librarian and mother of a five-year-old girl having an affair with a 17-year-old young man, how does an author deal with the cringe factor? How does she avoid slipping into the lurid or cliché?

In Mayumi and the Sea of Happiness, author Jennifer Tseng does it through language and setting. Tseng’s narrator Mayumi Saito is erudite, poetic, and compulsively self-questioning.

Her language is that of a well-read person whose syntax derives from immersion in drawing rooms of 19th-century British novels. Mayumi’s vocation as a librarian only partly explains her elegant expressions such as this description of a series of small bridges on a forest trail: “… most of them single planks of wood or flat stone, all of which crossed the small river that traversed, like a black artery, the body of the forest, bringing fresh blood to some remote, unseen heart.”

Or there is this rather overworked pronouncement that might be at home in a Jane Austen novel: “I worked to extinguish the conversation so that I might be released to greet him.”

While the language—replete with lovely, apt, and unforced imagery—does, in fact, lift it above the otherwise indecorous nature of the affair, it’s a little perplexing. Who is this person, where does she live, and why does she talk this way? It is all soon explained. Mayumi was raised in England, the daughter of a Japanese expatriate economist and a Midlands housekeeper, and educated at the very proper sounding Hatfield School for Girls. She immigrated to America when she was 18 to eventually settle on an island off Massachusetts with her husband and daughter. Existentially, Mayumi observes, “I have lived on a series of islands and I began as an island: I, an obscure piece of earth, floating choiceless within my mother’s sea.”

Islands, seas, and forests are the recurring landscapes of Mayumi’s life. Tseng imparts a fairy-tale quality to the setting. There’s the tunnel-like trail with its various little bridges that leads first to the waterfall where Mayumi “crosses a chasm” and is “stranded in joy,” and then to the little gray house in the woods where she and the young man conduct their trysts—in the loft. Mayumi says, “The loft was a place of surrender, abandonment, the only struggle there was moral.” The word loft in its adjectival form lofty also suggests noble or sublime. Somehow Tseng manages to balance on this moral tightrope of forbidden love as it is played out on a verdant island with its storybook houses in forests, quaint shops by a tea-loving librarian schooled in the literature of Nabokov and Duras, and a young man who is never named, lest a spell be broken.

In assessing her romantic actions, Mayumi invokes the oft used Japanese saying her Midlands mother had adopted: “It can’t be helped.” Like the seasons, which mark the divisions in the book, there are things beyond our control. Love is one of them. Another is enjoying this highly readable book whose ending is both surprising and expected in the way of all good stories.