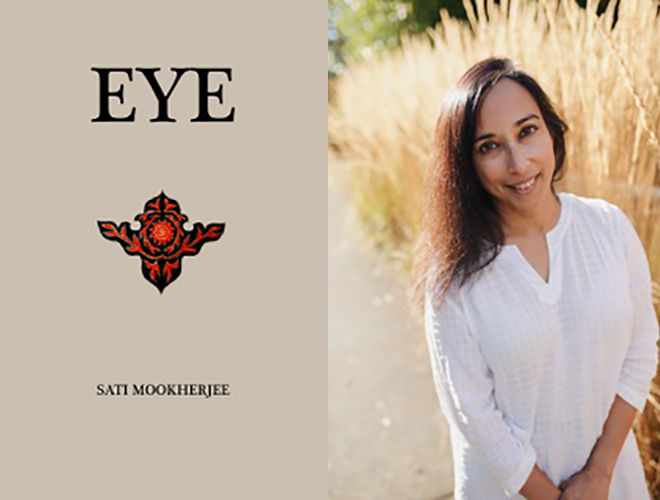 Sati Mookherjee’s debut book of poems, Eye (Ravenna Press) is a lyrical ode to her grandfather’s legacy, voyaging across intersecting orbits of earthly and celestial bodies in a nonlinear continuum of time. Excerpts of our conversation below.

Savita Krishnamoorthy: Eye is a glorious tribute to your grandfather, Sri Anil Hari Chatterjee. I would like to begin our conversation with your memories of him.

Sati Mookherjee: So many. He was always incredibly proud of everything we did. One of my earliest memories is of his first trip to the United States. He arrived the day my mother gave birth to my little brother, and I took him into our house. I was three, a week from my fourth birthday. And I remember showing him my bedroom in our Bellingham home saying, “This is the bedroom!” in all my three-year-old pride. And he said, “Oh, baba!” Meaning – “Oh my goodness!”

SK: He was a scholar, a scientist but this also shows a side to the man, being so kind to a little girl and taking pleasure in what she is showing him.

SK: The book is divided into three sections. Kal, Dukkho, and Kal. The Dukkho section focuses primarily on your grandfather’s life in India, and his exile in Britain. It unpacks themes of belonging, and a grief at this loss of place called home.

a story of travelers and immigrants.

I want to connect this poem to Poem 16 (Dukkho) where you use the simple motif of the bubble, manifested as the inner, metaphysical eye that travels all the way to India. You’re interrogating this commonality of a longing for home, which bonds those who have moved (by choice) or been displaced (by compulsion/circumstance) to countries far away. Do you think this longing for home ever goes away?

SM: In my experience, no. I have lots of [immigrant] friends and family and there’s still this sort of pull. Is that a longing or an identification? I don’t know. I was born here, and I grew up here. So, I have a whole different problem, which is, what is home? In terms of the immigrant experience, I can only speak to what I’ve seen. And there’s this, I think, sadness. I don’t want to call it a wound necessarily because that’s not the right word. But it’s almost like it’s a string that’s alive and buzzing, that connects to that past. I think that’s the commonality. It doesn’t matter where you have come from – Europe, Asia, South America — or where you have landed. There’s this pang of, oh, I’ve left a place that was deeply familiar.

You very perceptively started with the first poem. The reason I started with that is because the longing is obviously a human emotion, but the idea of immigration or native versus invasive species is not a uniquely human story. Even the moon has solar particles raked into the soil or fragments of comets. That is the nature of the cosmos.

SK: Speaking of which, you link metaphors of the moon, of eclipses, circles, and the eye to this concept that time is not linear, it’s concentric. Time is cyclic. The word Kal occurs in the first and the last section and it means yesterday and tomorrow in Bengali. Why did you choose the leitmotif of this intersection of orbits and time as cyclic as a through line in the book?

SM: I don’t know that I chose it. I think it chose me. What I am getting at is the great mystery and unknowability of things. Isn’t it curious that our lives are constituted in circles? We revolve around the sun, and we start back from where we started, and we call that a year, and yet, it’s a new year every day. And then, within that the moon is circling us, and we say it’s a new moon and an old moon, but it’s the same moon, and it’s the same us, and we’re moving so fast through space and don’t realize it. I wanted to play with these motifs. The eye idea and seeing kept coming up. It found me like it wanted to be in the book too. And then there was a moment where I realized that orbit and eye are synonyms.

SK: It’s very organic, because they are in different places, but with different interpretations in the book, you know?

SM: That’s the fun of it. I like to read poetry that’s technically interesting and well crafted, poets who are very technical, [with] a love of language. I know that a lot of people don’t read poetry, and so I like to say to those people, when they are trying to read my book, hey, here’s something fun you can do. Where do circle images come up? Where do eye images come up? I wanted a resonance throughout it, of concentric circles that are overlapping and hopefully you get that sort of rippling effect, orbiting, reverberations.

SK: You said you are drawn to the craft of poetry. Who are the poets that you like/follow?

SM: I’ve been doing this project this past month where I’ve been reading a poet every day which is super intense and so pleasurable. Poets I’m reading now that I’ve really enjoyed are Rick Barot, Mary Cornish, Bruce Beasley, D. Nurkse. After this month is over, I want to go back and look more deeply at how they did what they did, where the craft is so in service to the poem.

SK: What a wonderful, curated list for our readers. Switching topics, I want to delve deeper into the intersections of the construct of Mother/motherhood where in poem 14 (Dukhho) your grandfather’s professor in England furiously emphatically states that, “Britain is a tigress”. You juxtapose this with the powerful manifestations of Durga, that your grandfather was, “no stranger to mother-warriors, reared by Durga, by Kali, by his own mother”. What was the significance of the goddess in your grandfather’s life?

SM: My grandfather was a religious man in the Vedantic sense of Hinduism which is expansive and rational. Durga, in particular, was very important in my family. What’s so interesting about Durga Puja is on one hand you have the story of Durga coming home with her children, and at the same time the depiction of her arms with weapons, slaying.

These binaries of nurture or avenger, scientist/artist are not at odds or even two separate things. I want to take things that seem to be at opposition and show that sometimes they’re actually the same thing.

SK: You return (in the book) to your childhood home in Bellingham where Durga’s third eye becomes, “a window, a lens [to look] through it” [and dream]. At the risk of sounding sentimental, the presence of the goddess is like a blessing throughout the book.

SM: I love that. Oh my God, that’s so beautiful. I have goosebumps.

SK: In the last section (Kal) you talk about yourself as a mother, holding your son close so you can, “watch the eclipse” and, “your own self” in his eye. A beautiful way to close. Thank you, Sati, for your time and for this riveting conversation. It has been an absolute pleasure.

SM: What a joy for me, for somebody to read the book so carefully. It is such a gift, so thank you.