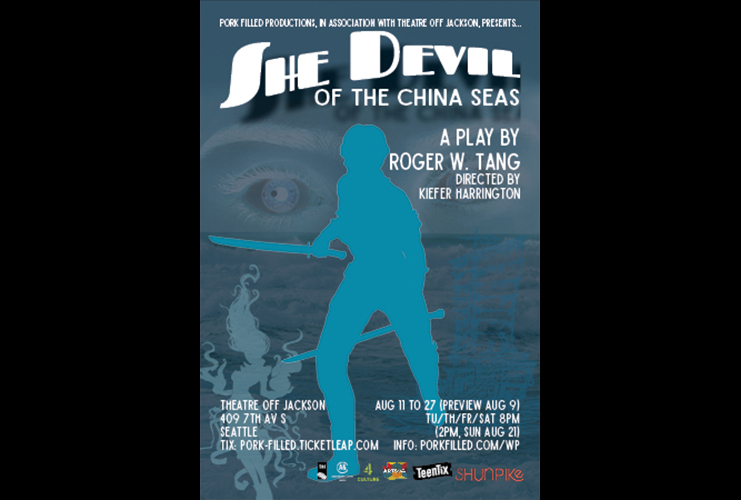 Playwright Roger Tang, a co-founder of Pork Filled Productions, has been an impressive figure pioneering the Seattle AAPI Theatre community for over two decades. His newest production, “SHE DEVIL OF THE CHINA SEAS”, is inspired by the most powerful pirate in history, a 19th-century Chinese pirate named Zhang Tse (also known as Ching Shih). The following interview explores different aspects of Roger Tang’s core missions of advocating for Asian Americans within theatre, celebrating Asian American identity, and the importance of telling the stories of Asian heroes to a broader audience.

International Examiner: What is your earliest memory of, and experience with, theatre?

Roger Tang: I first did a little bit of acting as an elementary school kid, where I did a little show, hamming it up as a very cliched, moustache-twirling villain. I didn’t do anything in high school, but in college, I was introduced to the Asian American student movement. Asian American identity was something that was expressed in a variety of different ways, and theatre was no exception; I got introduced to the pioneers at the Asian American Theatre Workshop in San Francisco. At the same time, there was a tradition of dorm dramas, where dorms would put on musicals and plays, using folks from the dorm (60-100 people) as cast, staff and director. My final year, we happened to put on a play written by a dorm resident that dealt with Asian American identity, and I was lighting designer for it. That dorm mate happened to be David Henry Hwang. That play was F.O.B., which won an Obie for off Broadway, and that launched David’s career (and my ongoing connection to Asian American theatre).

IE: You are one of the founders of The Pork Filled Players (the oldest AAPI theatre group in the Pacific Northwest), which you and several colleagues founded in 1998 in Seattle. Then, in 2013, the Players spun off their theatre efforts as Pork Filled Productions, while keeping the sketch comedy work under the name of Pork Filled Players. Do you have some favorite memories from over 20 years of all this creative and collaborative work?

Roger Tang: I’ve got fond memories of all the shows I’ve done, and my fellow co-producers, from PFP co-founder David Kobayashi to Maggie Lee to my current team. I think some of the highlights include doing the Northwest premiere of Yellow Face by David (we flew him in to greet audiences). But I’m also proud of the work we’ve done to launch careers. A PFP co-founder, Ellen Williams, went on to star in TV sitcoms (she was a memorable guest star on How I Met Your Mother), charter member Dustin Chinn has gone on to a playwrighting career, Richard Slonicker is now a working actor here and across the nation, and we helped get Maggie Lee a boost by producing the first plays she got attention for, the New Providence trilogy of steampunk plays which began with The Clockwork Professor.

IE: “SHE DEVIL OF THE CHINA SEAS” is based on the true historical figure of Zhang Tse (also known as Ching Shih), the most successful pirate in history. She was born in China in 1775. What inspired you to choose her as the protagonist for your play?

Roger Tang: She was a colorful and larger than life character, like Jesse James and other famous outlaws, but wayyyyy more successful—she got to keep her loot and became an upright citizen. That sort of colorful life fits in with PFP’s goal of creating heroes and legends to be compatriots of the James T. Kirks and Indiana Jones—we can’t leave pop culture to just the white boys. She’s a true original who has a rags-to-riches story that needs to be a part of world pop culture.

IE: How closely did you follow what has been recorded about Zhang Tse’s life and what did you want to change, if anything?

Roger Tang: There’s actually not a whole lot that’s really known about Zhang Tse; we don’t even know her name (and that goes beyond the differences between Mandarin and Cantonese). That left us a lot of room to fill in the details, and there are definitely things I added that are kinda fanciful (starting with the magic-wielding sorceress). But a lot of what I dramatized was actual cold, hard fact, and even more is plausible, given the bits of history we know. I’ll leave it to the audience to figure out what’s true and what I made up.

Roger Tang: Oh, I’ve been a comics book reader since I first began to read (which was mumble mumble years ago), so my storytelling sensibilities are steeped in comic book themes and storytelling. And the whole impetus for the story is something I…ahem….borrowed from Marvel’s first series for Conan the Barbarian. And the first scene is a riff on the origin story of Red Sonja, the female barbarian heroine Marvel created to team up with Conan. Long time comic buffs ought to get a kick out of that.

IE: Could you tell our readers a little about what it has been like to work with the Society of American Fight directors in training actors in the Asian American community in stage combat?

Roger Tang: I feel extremely fortunate in getting to work with the SAFD and their EEE program. It’s aimed precisely at giving stage combat training to underserved communities and Asian Americans receive very little training of any kind, thanks to the lack of role models and outright racism in theatre training programs. Getting nearly a dozen folks certified as unarmed staged combatants is something I’m extremely proud of as part of my own personal mission as an advocate of Asian Americans in theatre.

IE: Are there any questions you hope that viewers of your play will discuss after they see “SHE DEVIL”? And do you think that aspects of the play are relevant in thinking about what is happening in the contemporary world?

Roger Tang: I think heroes are always needed in the world. Larger than life men and women are always welcome. But the absolute rarity of Asian heroes (you use one hand?) means telling the story of Zhang Tse is kinda vital in the 21st Century here in America.

IE: What playwrights have inspired you the most and why?

Roger Tang: David Henry Hwang, of course. Kinda hard not to get inspired by a college friend who rose to win a Tony and lead the efforts against whitewashing in Miss Saigon. A real role model as an artist and activist. There’s also Qui Nguyen (co-writer of Raya and the Last Dragon and Vietgone). His work with his group Vampire Cowboys showed all of us that genre stories could be great theatre; PFP introduced him to the Northwest with his Living Dead in Denmark, a mashup of Shakespeare, zombies and martial arts.