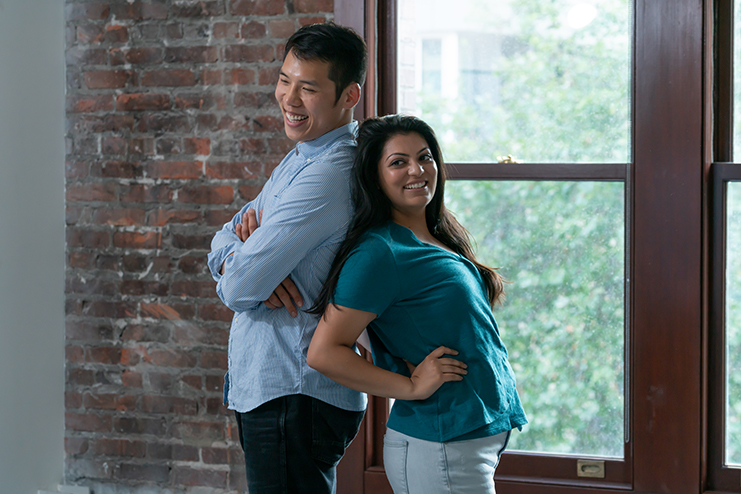 Crazy Rich Asians may have been a smash hit, but playwright Nandita Shenoy believes it’s important to see how the majority live, and local arts companies Pratidhwani and SIS Productions agreed wholeheartedly. The two groups teamed up to co-produce Shenoy’s play Washer/Dryer, about the challenges of making a new marriage work when there are struggles about money and highly-coveted appliances.

Shenoy reports that the inspiration for the play drew, unhappily, on her own life. “I had an unfortunate experience with my co-op board when I was away doing a show,” said actor-writer Shenoy, “and the process of dealing with it was so convoluted and crazy that I thought co-op boards were a uniquely New York insanity that was worthy of being in a play.”

The struggle to purchase an apartment in a co-op resonates with Shenoy on multiple levels, both as a woman and as an artist. “For me the topic of money intersects with gender primarily because of the gender wage gap and the way women are socialized to talk about money,” she said. “New York co-ops can be bastions of sexism, racism and classism since a board can reject a buyer for any reason at all.”

Melded into Washer/Dryer’s story is the struggle to earn a living as an actor, in particular. “Being an artist often means the sacrifice of financial security and stability,” Shenoy said, “and to me, the apartment represents the aspiration many artists have to a stable life.”

As an artist, Shenoy can relate to every struggle experienced by her characters. “So much theatrical work is created on the backs of artists working for free,” she said. “There is an expectation that because one presumably loves the art, it is not work and therefore not worthy of compensation. But of course, artists need to eat and pay rent and get health insurance just like everyone else.”

So far, Shenoy has approached these financial challenges from inside the arts world. “So often one needs to take other work that is not artistic to pay the bills which then leaves less time for the art. It is a vicious cycle,” she said. “Luckily, I have mostly worked in arts organizations as an administrator when I’m not working as an artist, and so at least I feel like I am helping others achieve their dreams, as well.”

In return, SIS Productions and Pratidhwani were both pleased to help Shenoy with her dream of production for Washer/Dryer. “The first time we actually met Nandita was in January, 2018, when she came out to Seattle on a playwriting fellowship,” said Kathy Hsieh, SIS Producing Artistic Director, who is also playing the role of Dr. Lee in Washer/Dryer. “SIS was interested but really wanted to do it as a co-production with Pratidhwani, and it wasn’t until this year when SIS asked Pratidhwani again that they finally said yes!”

Both organizations have long been involved in bringing large groups of performing artists together. “What a lot of people don’t realize is the role that SIS plays behind the scenes in Seattle’s theatrical landscape,” Hsieh said. “Not only are we asked for casting support, advice and referrals for many local and national theatre productions, films and commercial projects wanting to hire Asian Americans, but we also focus on building community between Asian American artists.”

This is the serious back-story to what Hsieh otherwise believes local audiences will enjoy in this rom-com. “SIS Productions started out 19 years ago by producing Asian American rom-coms with our iconic Sex in Seattle series and they were huge hits,” Hsieh said. “Back then and now, people often question the value of doing a genre that some might label as entertaining ‘fluff.’”

But the SIS leadership is ready with a response. “There are only so many times you can play Asian women committing suicide over white men or having your family incarcerated during WWII,” Hsieh said. “But in these Asian American romantic comedies, we Asian American women get to decide what’s important to us on our own terms. We get to show a fuller spectrum of our humanity, what makes us laugh and cry and what we’re willing to stand up for. And what more powerful way is there to challenge not only racial, but also gender inequity than portraying Asian American women as the protagonists at the center of our own stories.”

In addition to gender, Hsieh appreciates that the play explores ethnic variations within Asian American culture by focusing on an Indian American woman and a Chinese American man. “Asian Americans are always lumped together in one monolithic group, so it’s always fun to explore the nuanced distinctions between people of different Asian American cultures,” she said. “This is why we thought it would be the perfect script to do as a co-production with Pratidhwani, a local Indian theatre group.”

Although Shenoy will be unable to be present in Seattle during the production, due to work on another show in California, she reports being in good communication with both SIS and Pratidhwani. “I hope that my presence is felt even if I can’t be there physically!”

Washer/Dryer runs from September 6 to 22 at Theatre Off Jackson, 409 Seventh Avenue, Seattle.