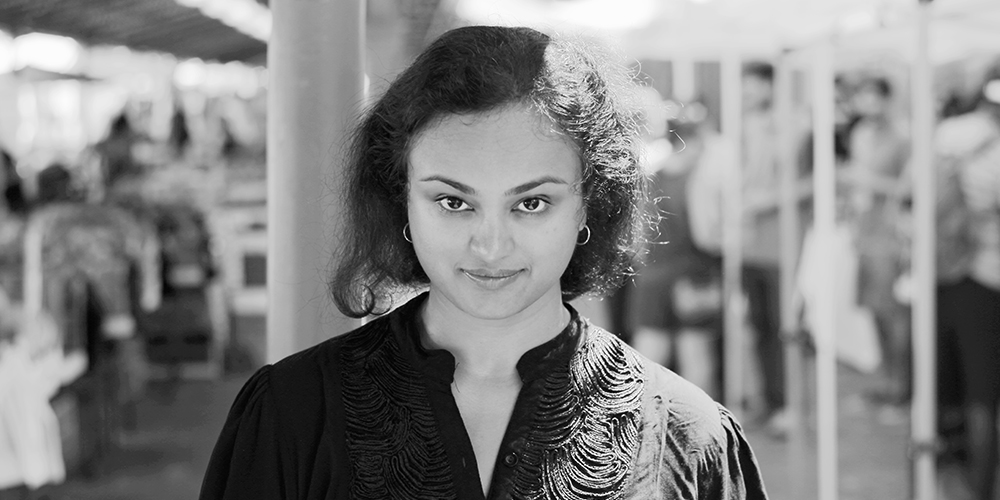 In 2018, Mrinalini Kamath has been the Ma-Yi Theater/ University of Washington Mellon Creative fellow, and that has allowed her to present work at the University of Washington in both January and June of this year. “The Mellon Creative fellowship that Todd London at the UW School of Drama began with Ralph Pena at the Ma-Yi Theater Company, with the blessings of the Mellon Foundation, was my first encounter with theater in Seattle,” she said.

Kamath’s early experiences with theatre were limited. “My parents are immigrants who didn’t really grow up going to the theater, but when I was young, they did occasionally go to New York, downtown to the old World Trade Center, and buy tickets at the TKTS booth,” she said. “I remember seeing My Fair Lady, and, somewhat scandalously, since my poor parents didn’t really know what to expect, Zorba! the musical based on Zorba the Greek.”

It wasn’t until college that Kamath began to focus on dramatic writing. “I did my undergraduate degree in the Writing Seminars at Johns Hopkins University, and split my time between fiction and journalism,” she said. “One of my professors noticed that I had an ear for dialogue and tended to write dialogue-heavy short stories and recommended that I look into playwriting.”

This recommendation was life-changing. “I was hooked after my first playwriting class,” Kamath said. “The reaction of a live audience was unlike anything I had ever experienced writing fiction.”

One source of inspiration for Kamath’s dramatic writing is mythology. “The last full-length play that I completed, I worked on while inspired by Twyla Tharp’s book The Creative Habit, where she describes using myth as the spine when starting the piece,” Kamath said. “You can veer away from the myth whenever you want, but it’s nice to have a spine to rest the piece on in the beginning.”

This play, Let There Be Love, is based on the myth of Eros and Psyche. “Working on the play at UW was great, as I had a reading of the play the previous October,” Kamath said. “Putting the script away for roughly three months was enough time to pull it out and start looking at it fresh.”

Kamath feels that the play development process here in Seattle has improved her work. “Working on it in the rehearsal room with a director and cast who weren’t familiar with it also allowed me to make several cuts, further tightening the piece,” she said. “With each presentation, I hope to discover something new or hear something differently that informs cuts or additions to the script.”

The words of other women continue to motivate Kamath’s work. “I was inspired to write The New Deal by a line in Agatha Christie’s autobiography, where she makes the comment, ‘You might allow your criminal the choice between the cup of hemlock and offering himself for experimental research,’” Kamath said. “I found it intriguing.”

This intrigue developed into a play concerning drug testing and the rise of for-profit prisons in the contemporary United States. “The more I thought about it, the more I could see it happening, with the rise of both big pharma and for-profit prisons,” she said, “despite the various medical ethics regulations that have been put in place since the days of the notorious Tuskegee Airmen experiments, where African-American veterans were unknowingly injected with syphilis in the guise of free medical care.”

But all of this inspiration and creativity is not without its challenges. “The biggest challenge I find is balancing writing and research time with everything else,” Kamath said.

Over time, she has found strategies to address this time-crunch. “I schedule time in my day-to-day life to write,” she said. “I have a friend who is a screenwriter, and we’re writing buddies. We meet three mornings a week, before I go to work, and write for a couple of hours.”

Kamath reports that she has found some work-creativity balance. “I’m very fortunate to have a ‘day-job’ in a performing arts organization with co-workers who are supportive of my creative work, but the fact remains that 40-plus hours of my week are spoken for,” she said. “And being a playwright doesn’t mean just writing. There are applications and proposals to write and submit, website and newsletter updates to be made.”

Her fellowship at UW really opened her eyes to these scheduling challenges. “After my first time at UW last January, where I accomplished a lot every day, I wondered ‘How on earth do I normally get anything done?’” she said. “As time goes on, the idea of having a less conventional work life that allows me more writing time is tempting.”

Regardless, as her writing for theatre continues, Kamath expects to continue to focus on the theme of connection. “Not necessarily romantic,” she said, “but for a genuine connection to something, a community, a family, that is bigger than themselves.”

Kamath hopes this connection will also ground her further in the local Seattle area. “This most recent visit, in June, I was able to meet with a few theater companies,” she said. “I would love a West Coast production in Seattle!”