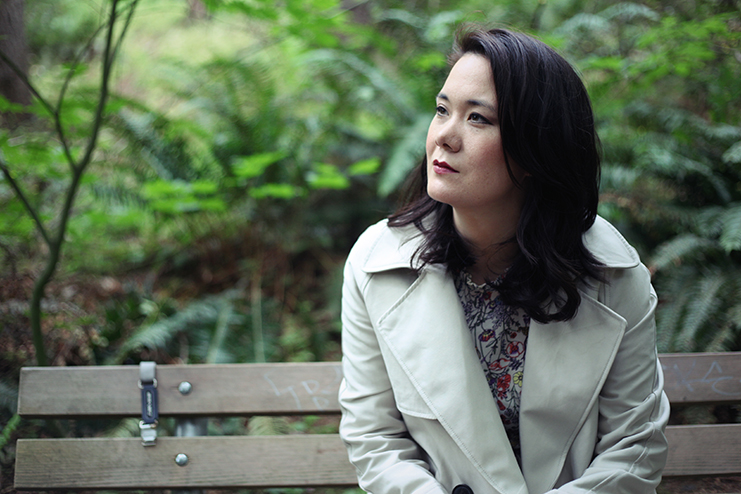 Playwright and actor Keiko Green has not let the COVID-19 pandemic stop her. Instead, she pushed more strongly on her transition from the stage to the pen and to the screen, pursuing new paths that are starting to come to fruition.

When the International Examiner spoke to Green in 2015, we focused on her acting work. “I am currently slated to co-star in the production of Sharon,” she said, in regard to her recently-written play Sharon, set in Everett, Washington, and to be presented at Cygnet Theatre. “I’m always interested in acting work if I can fit it in my schedule, so I’m hoping to continue on in both careers eventually.”

But acting has taken a bit of a back seat for Green in the past seven years. “I have pivoted more towards full-time writing,” she reported. “Mostly it’s because I love the act of creating worlds so much. The great thing is that I can actually start being more selective with acting work.”

In 2017, the last time that the International Examiner spoke with Green, her play Nadeshiko was being presented at Sound Theatre Company. “I’ve spent the last three years in graduate school for playwriting at UC San Diego, the only playwright in my year,” she said. “To put a positive spin on the pandemic, it gave me a lot of time to write, so I’m graduating with a whole new arsenal of work.”

In addition to presenting and performing in her new play Sharon, she will also have another of her plays produced: Exotic Deadly: Or the MSG Play. “My grandpa worked for the MSG manufacturer Ajinomoto in Japan, so I’ve always wanted to write about that,” Green said. “That play means a lot to me because it tackles the misconceptions of MSG, shame, and depression, but in a wild, time-traveling, laugh-out-loud coming-of-age structure.”

Green is also expanding beyond the stage. “I also started working as a screenwriter,” she revealed. “I’m currently a staff writer for a TV show for Hulu set in a fictional Chinatown.”

As a writer, she expects this project to be a formative experience. “It was a humbling experience to see audition tapes from these incredible Asian American actors I’ve admired for so long,” she said. “Most of the writers’ room is Asian American, and I feel so blessed to learn from these kind, patient artists.”

Plus, Green has been developing a rom-com feature with ACE Entertainment for the past two years. “We initially sold this as a TV show, then the contract fell through, so it feels good that they trust in the project enough to continue working with me on it,” she said. “This is also a food-based script, so I’m learning that I really like writing about food!”

But Green is still keeping one foot in the theatre world, with commissions at both ACT Theatre in Seattle and the Old Globe Theatre in San Diego. “You Are Cordially Invited to the End of the World! is my commission for ACT,” she said. “I’m glad to be back in Seattle to workshop that play this summer.”

Splitting her time between the two cities, Green considers herself based out of both Seattle and Los Angeles. “For my Old Globe commission, I’ll be writing about a ghost story set in the forests East of Osaka, Japan,” she shared. “Structurally, I’m inspired by Haruki Murakami to see how a small, personal story can break off into a multi-layered adventure into the underworld.”

The pandemic opened up Green’s creativity in regard to her writing, due to the shutdowns and uncertain future of the theatre world. “I really started writing plays that would make me laugh while writing, or something that would surprise me,” she said. “In writing something for me, I’ve had more people than ever connecting with that work, including theaters, which has been deeply rewarding.”

Green plans to remain solidly rooted in the Seattle area, with her play Hometown Boy to be slotted for a Seattle production sometime in the coming year. “This play acknowledges race and class power dynamics, but it’s not a ‘race play,’” she said. “A victim of one story can also continue that cycle of abuse in a different way and become the villain of another story.”

Current events make this play right for Seattle right now, Green believes. “I think Seattle is a very liberal city that loves the digestible idea of black and white, that there are good guys and bad guys,” she cautioned. “Hometown Boy explores the ugly, complexity of these issues.”