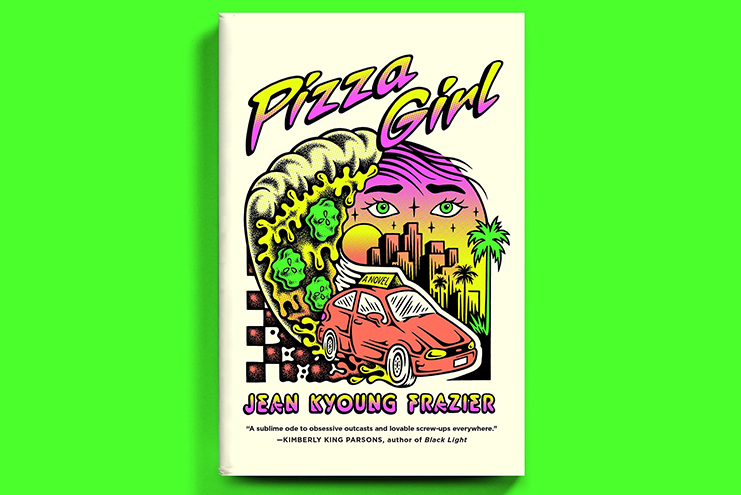 Pizza Girl, the debut novel from Jean Kyoung Frazier, is, at its heart, a fascinating character study of its narrator, Jane. Jane is 18, pregnant, and working at a pizza restaurant in LA, seemingly directionless in her meanderings through life as she struggles to deal with the death of her unstable alcoholic father and the thought of impending motherhood. Narrated by Jane in the first person with details that cycle between funny-dark and poignantly offbeat, the novel begins with the event that knocks Jane out of her usual habits—a call from Jenny Hauser, a stay-at-home mom who recently moved with her 7-year-old son from North Dakota.

Jenny’s request, a pepperoni pizza with pickles, propels Jane into her life, and the two develop a friendship that quickly develops into obsession and infatuation for Jane. As she grapples with managing and coming to terms with these feelings, Jane is also hemmed in at home by her mother and boyfriend, Billy, though not in the ways you might expect from either of those characters. They are supportive to a suffocating degree, and Jane’s genuine love for them is matched only by the inarticulable frustrations at their seemingly uncomplicated happiness about her pregnancy.

In fact, Jane’s pregnancy is never directly the source of any major conflict in the novel. Everyone else Jane encounters takes her pregnancy in stride. In fact, describing the interactions that she has with her high school classmates when she delivers pizza to them, Jane remarks that they are most disturbed by her lack of ambition. “They could support a teenage pregnancy,” she muses, “but not this, not a person who drifted from one moment to the next without any idea about where she was headed.”

Jane’s slacker attitude gradually unravels over the course of the novel, as the reader slowly learns about the demons that plague her mind and as she takes more and more (oftentimes cringe-inducing and inadvisable) actions in her pursuit of Jenny. In a different and perhaps more conventional coming-of-age story, Jenny would perhaps serve as the impetus of Jane’s transformation, prompting her to shed her old ways such that her life can open out onto gaggles of utopian potential.

While Pizza Girl is in many ways motivated by and enacted through a queer awakening, Jane’s attachment to Jenny is so far from healthy and her desire to abandon her present and past life, including her loved ones, ends up being interrogated more than celebrated. There are no simple resolutions in Pizza Girl, either for the character or for the readers, and that is part of the novel’s supreme and uneasy realism.

In an interview with Esquire, the author attributes Jane’s voice in the novel to the emails that she wrote as an 18-year-old to her first love. Read this way, as a “love letter to [Frazier’s] eighteen-year-old self,” much of the novel’s merits and faults come into focus. Pizza Girl captures the at once rousing and depraved, mundane and ecstatic experience of youthful infatuation by locking the reader into the perspective of the piner, and treats that voice with the tender care of someone who has felt that herself. \