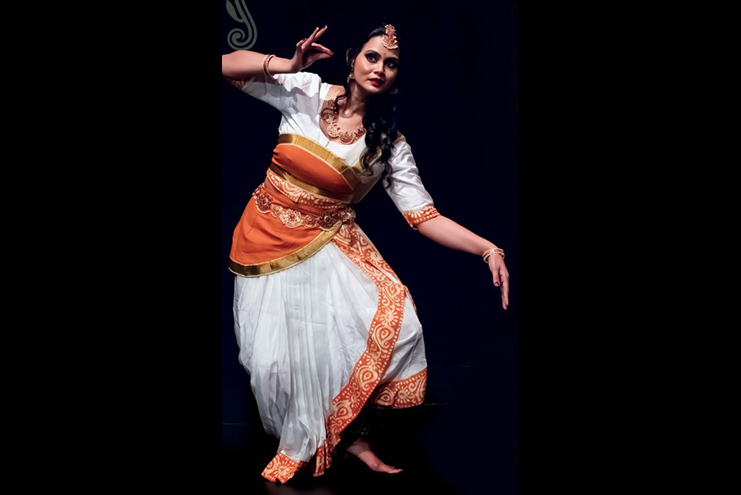 In addition to raising money, Biswas De aimed to showcase dancers from other regions.  “This year we have two guest performers; one is Roosha Mandal, a very talented dancer balancing her career while studying highly demanding medical student life at Chicago University,” Biswas De described.  “Another is Smt. Antara Datta from Ohio. Anatra is a Kathak, another Indian classical dance form, dancer and instructor.”

Biswas De’s plan in including these guests was to set a good example for her own students.  “Kathak is a classical Indian dance form, and collaboration is always required between various classical dance forms,” she said.  “My goal is to motivate my teen and tween students to look up to a dancer from a similar background who can balance many things and yet be a great dancer.”

These lessons hearken back to Biswas De’s own early years as a dance student.  “I started learning Indian Classical dance at three years old,” she remembered.  “The rhythm, intricate steps, costumes, songs, were so attractive to me.”

Studying dance helped develop Biswas De’s courage.  “In West Bengal, India’s very culturally active state, hailing from a small suburban town near Kolkata, all families encourage Indian Classical dance as a hobby or enrichment program besides regular schooling,” she said. “Even as a small kid, I was never afraid to face the stage or audience to showcase any of my dance numbers.”

Like another dancer, Gary Champi, recently featured in these pages, Biswas De is compelled by the combination of math and dance.  “Bharatanatyam is a form of Indian Classical dance with lots of math behind the steps,” Biswas De said.  “Being a math brain, that side of this dance is always beautiful and systematic for me.”

Throughout childhood, Biswas De studied dance at a steady pace.  “Bharatanatyam was initially taught as basic steps or Adavu, which are like a-b-c-d of the dance for multiple years with rhythm and various speeds,” she said.  “I continued learning and performing even after joining college or university in Kolkata under famous gurus.”

Then Biswas De moved to the U.S. and started a family.  “I resumed dancing in 2007 after my older daughter was born,” she recounted. “At that point, it was very performance-oriented for local communities or organizations such as Pratidhwani, Uttoron Bengali Association, Amrita-Seattle, Surya Teja Arts, Bhartiyam, and Asha Seattle.”

Already an IT professional, Biswas De began to develop a dual career as a leader in dance.  “I started not only choreographing a single number, instead owning or directing a production or a show,” she said. “In addition, I resumed learning other dance forms, such as Tap and Flamenco, and was fascinated to discover the similarities in rhythm, footwork, and hand movements with Indian Classical Bharatanatyam.”

Biswas De then transformed from dancer to teacher.  “In 2015, my dance instructor journey started with earnest requests from the parents of my older daughter’s friends,” she said. “It grew exponentially from seven to 76 students in just five years, with word of mouth and parents’ references.”

This led Biswas De to found Dance Tantra, a school located on the Eastside.  “I needed a formal structure for these families who trusted me so much for many years,” she said. “Even though there are multiple teachers in this region, the demand for personal attention is exceptionally high for this kind of dance form.”

She considers herself a “dance mom” to her students.  “Becoming too soft towards students does not help, but too much strictness does not allow bringing love to the art form,” she elaborated. “I encourage all students to perform their best at least once a year based on their skills.”

Balancing corporate life, motherhood, and dance, Biswas De admits to being a workaholic.  “Teaching dance to kids is a different level of satisfaction in dealing with innocent questions and bringing love to the art form,” she said. “As a mom, it helps as a dance instructor to understand so many of my dance kids and their needs relevant to their world, especially when they learn some art form they don’t see around them frequently.”

Plus, Indian dance is built on stories that may be unfamiliar to contemporary Americans.  “Another challenge I do see is the language barrier among kids born here learning Tamil or Telugu songs used in Bharatanatyam,” Biswas De said. “I believe art has no language barrier, and in the past, I choreographed contemporary numbers for Italian opera songs as well. It needs proper explanation from the teacher.”

Biswas De also feels that students yearn for a connection between their art form and their daily lives.  “Such expressive art forms need more to be explored in current world situations,” she said.  “Last year’s recital explored the subject of freedom and its meaning to the current world.”

She also highlights the situation of marginalized artists in India during the Covid-19 pandemic.  “Their lives, dependent on festivals, have been greatly affected in the past two years,” Biswas De said “As a privileged artist, I want to build this awareness in my students, families, and audiences.”