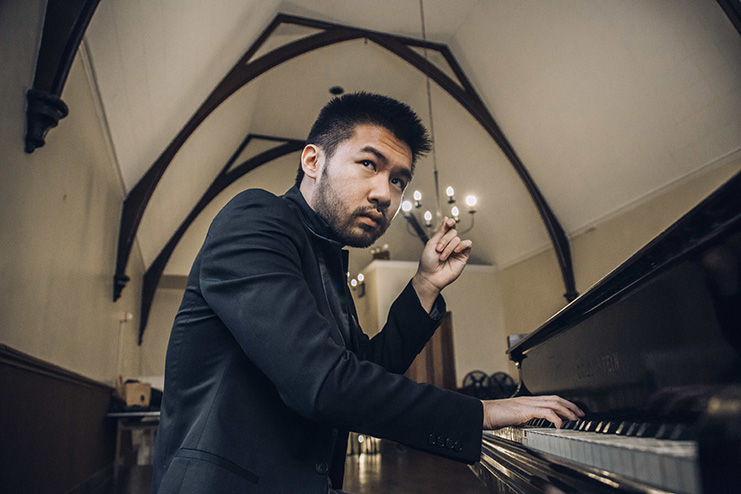 New York Magazine has described pianist and composer Conrad Tao as “the kind of musician who is shaping the future of classical music.” He has previously performed with the Seattle Symphony, but on October 13, Tao will make his Meany Hall debut at the Meany Hall Center for the Performing Arts on the University of Washington’s Seattle campus.

Tao’s program includes Beethoven, as well as a piece by Felipe Lara entitled Injust Intonations (#BlackLivesMatter), and a new composition by Tao himself that was commissioned by Meany Center and Celebrity Series of Boston. Tao had presented the official world premiere of Lara’s piece at the Aspen Music Festival on July 8, 2017, and now will share it with Seattle audiences.

Tao reports that he built the Meany Hall program of six pieces based on a musical arc that he imagined. “Beethoven’s Tempest Sonata has been in my hands for the past couple of years, and I knew I wanted it to be at the center of a program, and I knew I wanted to highlight the sonic experimentation that is evident all over the piece,” Tao said. “And I also wanted to find a way to structure a program around two alternate versions of Ruth Crawford Seeger’s Piano Study in Mixed Accents, with their opposite dynamic trajectories.”

Music has been a lifelong pursuit for Tao. “As far back as my memory goes, I was already engaging with music,” he recalled. “My earliest memories are more social than anything, the family friend who offered to teach me lessons for free when no one else was willing to work with a three-year-old, the pleasures of group Suzuki violin classes with a wonderful community music teacher.”

Sounds and notes were mysteries that Tao felt compelled to explore. “I started going to Chicago Symphony Orchestra concerts with my parents when I was six, and I remember two concerts vividly: Mitsuko Uchida performing Ravel’s G Major Piano Concerto with Pierre Boulez conducting in 2001, and Ute Lemper singing Brecht and Weill’s The Seven Deadly Sins with Markus Stenz conducting in 2000,” Tao said. “The Ravel struck me immediately. I remember going home and trying to figure out what the chromatic piano triplets in the opening were, I remember being transfixed by the blue notes and licks borrowed from jazz all over the piece.”

The draw of composing came early, as well. “I remember improvising at the piano with a minidisc player recording,” Tao said. “I remember writing my first melody, titling it Congratulations, which was misspelled.”

The piano was Tao’s first instrument. “We had an old brown Baldwin upright in the Urbana house where I was born,” he reported. “According to my parents, at 18 months I somehow got on the bench and started picking out the nursery tunes playing in my bedroom at the time. They still have a VHS tape of me stumbling through Mary Had a Little Lamb around that time.”

During his musical training, Tao learned several keys to good musicianship. “The most important things I learned in my training as a pianist were, from Emilio del Rosario at the Music Institute of Chicago, don’t fight the piano, because the piano will always win,” Tao said. “From Yoheved Kaplinsky at Juilliard in New York, I learned how to listen to a piece at a macro scale, and most importantly, how to build a technique that is ergonomic, that doesn’t fight one’s body.”

Tao also lauds his composition teachers. “From Chris Theofanidis, I learned to develop motivic through-lines and hone my instincts as a composer,” he recalled. “Perhaps the greatest contribution Chris had in my life was introducing me to contemporary concert music in listening sessions starting from the age of 10. Those sessions revealed just how much there was to explore.”

For years, Tao performed at a breakneck pace, until the COVID-19 pandemic hit, and he was forced to present his work online. “The initial lockdown period of COVID pushed me inward,” he said. “I spent a great deal of time working on my improvisational practice as a pianist.”

Tao began to step outside his primary medium. “I enjoyed thinking about the video container,” he said. “I began developing a composing practice with video that I am excited to continue exploring moving forward.”

He also, unexpectedly, picked up a pen. “I wrote an essay about house music and harmonic form,” he said. “All of these were developments that likely wouldn’t have happened had my usual pace of work not come to a complete halt.”

Throughout his career, Tao says his main challenge has been trusting his voice. “I have learned over the years that when I feel a profound fear about a new work or a program, often in the shape of ‘can I do this? can I actually get away with this?’” he elaborated, “it is a sign that I am going down the right path, a challenging, scary path, and usually a revealing one.”

That’s the kind of path Tao is traveling with his new composition to be presented in October. “For a long time now, I’ve been interested in whether or not it’s possible to play up and down the harmonic series on a single key,” he mused. “I’m interested in the phrasing rendered perceptible by that focused listening.”

Tao describes all this as the inner world of the musical key. “My goal is for the new composition to explore this possibility and its implications,” he said.

That goal appears to be just the current one of many to come. “I hope to make music with the capacity to touch how someone listens, music that expresses my perspective and invites others into it,” he said. “And I hope to keep doing it for the rest of my life.”