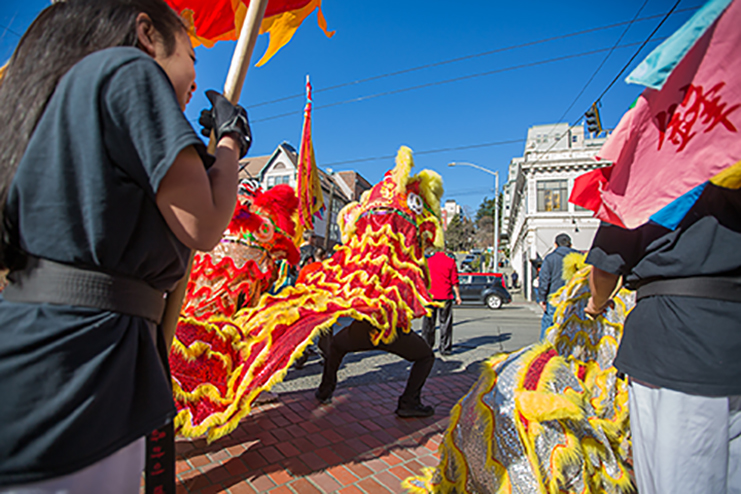 (This piece was originally published here in the South Seattle Emerald and is republished with permission.)

Seattle’s Chinatown-International District (CID was abuzz with activity on March 2 to welcome in the Year of the Pig. Under a clear, sunny sky, throngs of hungry people lined King Street to sample the offerings of various food vendors, while performers from different cultural associations took the stage at Hing Hay Park just beyond. The sound of drums and cymbals resonated throughout the streets, as the Northwest Kung Fu and Fitness lion dance troupe visited shopkeepers, dancing and strewing cabbage in front of their stores to bring them good luck in the coming year.

The Lunar New Year, celebrated by several East Asian cultures, is an opportunity for the CID’s community to come together, Communications and Marketing Director for Chinatown-International District Business Improvement Area (CIDBIA) Monisha Singh said. She said the CIDBIA has been putting on Lunar New Year celebrations for at least 20 years, but the families who celebrate it in the CID have been around for much longer.“There are a lot of residents who grew up in this neighborhood who still live here. There are a lot of families who grew up in this neighborhood who have been here for generations,” Singh said. It’s also a business opportunity for local merchants.“It is a celebration of the neighborhood, as well as an opportunity for us to promote this neighborhood within Seattle, not just for the Lunar New Year holiday. Every day, it’s a good place to eat out, we have lots of great restaurants, lots of great activities here,” Singh said. Singh said she believes it’s a tradition that will stick, even as Seattle’s landscape changes. “It will be very interesting to see how this very historic neighborhood either remains the same, in some ways, and changes in different ways. It’s a very interesting neighborhood to be celebrating and looking at, as the world around it changes,” Singh said.

All photos by Carolyn Bick: