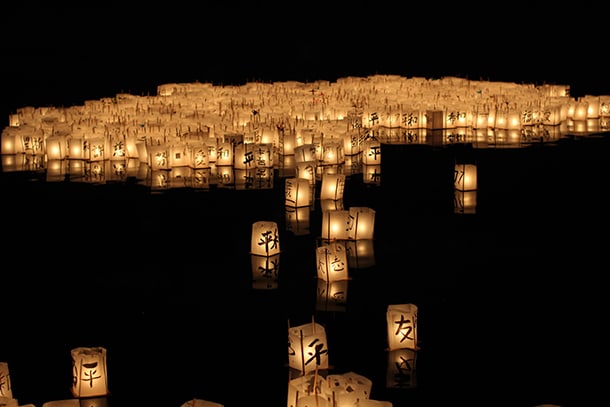 More than a thousand people of diverse backgrounds stood in solemnity on Green lake’s northwestern shore on August 6, lanterns lighting each face in an orange glow.

The Toro Nagashi is a lantern floating ceremony to commemorate the victims of the Hiroshima and Nagasaki bombings 72 years ago. In the adaptation of the Japanese Buddhist ritual, the lanterns represent the souls of the dead as they float out to sea.

From Hiroshima to Hope has done the Toro Nagashi ceremony since 1984. It started in partnership with the Washington Physicians for Social Responsibility and now has 23 sponsoring organizations.

Physicians for Social Responsibility (PSR) was founded by physicians in Boston who realized prevention was the only treatment for nuclear tragedy. The organization’s branch in Washington (WPSR) co-founded from Hiroshima to Hope in 1984.

Mary Hanson, a member of the planning committee overseeing the lanterns said participation and awareness of the event has grown from 300 attendees to more than one thousand.

“Having a ceremony like this, not as a political statement but something of more contemplative thinking where people could be moved to make changes,” Founding member and former chair of the planning committee Martha Brice said. “To remind us of the people who have died from conflict and to commit ourselves to nonviolent resolution of conflict on all levels of society.”

“We live in such a diverse community,” she said. So much anger, so much anxiety and so much fear usually come with not knowing the truth.”

Hoku hopes events like these lead people to a deeper level of understanding and a sense of community despite language differences.

Calligraphy stations for the lanterns lined the edges of the grass before the stage but not only in Japanese. Sutinder Chawla and Joti Selchan wrote calligraphy in Punjabi.

Block print artist Yoshiko Yamamoto said the multi-cultural event at Greenlake makes it unique. Yamamoto created her third block print for the event Peace Forever depicting a mother and daughter placing their lanterns in the water.

Yamamoto said the inspiration for the design struck her when one year at Hiroshima to Hope, her daughter waded into the water with other young people from the community to help guide the lanterns. Her two daughters volunteered ever since.

For Yamamoto, the ceremony is about creating an atmosphere of peace and inclusion.

“For me, it’s about creating a place where we can all gather without being divided by politics,”

she said. “It’s about uniting people by our common need for peace and harmony.”

Brothers Senji Kanaeda and Gilberto Perez of the Nipponzan Myohoji Buddhist temple lead a blessing of the event as a part of their Peace Walk for a nuclear free future.

Singers and performances followed including Seattle Kokon Taiko, a Japanese drum performance group who has been playing at every gathering since the beginning.

“I hope that someday we will not need to have a memorial,” group leader Stan Shikuma said. “Instead it will be a celebration that we achieved nuclear disarmament and world peace.”

Following the performances, Keynote speaker Tom Ikeda, executive director of the Densho project documenting the stories of Japanese Americans who were incarcerated during World War II, took the stage. Ikeda spoke about hope that exists in each individual and has the capacity to change the world one community at a time.

“When I think about our country and what we are faced with today, my hope is that the human spirit in each of us can rise above our own concerns and think about each other,” he said.