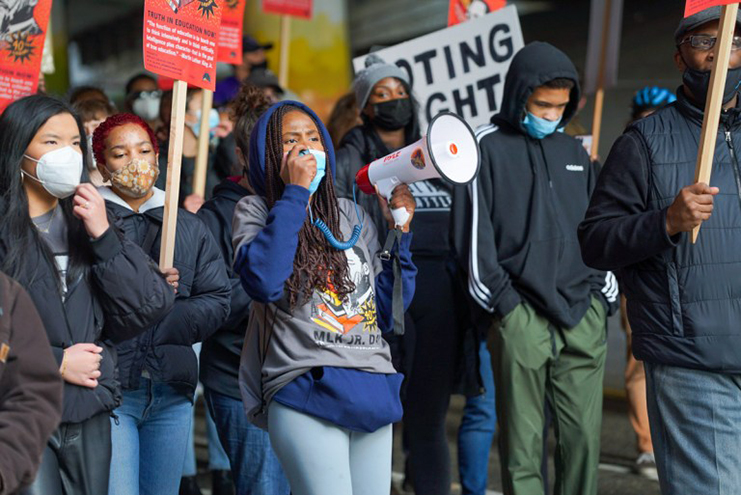 (This article was previously published in the South Seattle Emerald and has been reprinted with permission.)

Despite the omicron variant surge, hundreds of people, including lots of families and children, came out for the 40th Annual Martin Luther King Jr. Rally and March on Jan. 17 at Garfield High School. This year’s theme was Truth in Education NOW. Many of the issues King was dealing with in his lifetime are still present today, including voting rights, workers’ rights, and income inequality, and those issues were touched on by several of the speakers and by the signs carried in the march.

The rally at Garfield included a variety of spoken word and vocal performances, including singers Alana Edwards, the duo of Alex and Alex, and Samara Jeffery who sang “A Change is Gonna Come.” Spoken word artist Saiyana Suzumura also performed.

Speakers included Isiah Anderson and Keisha Credit who both talked about equity in education.

After the rally, the crowd headed to Seattle City Hall, stopping at the Judge Patricia H. Clark Children and Family Justice Center and the QFC on Broadway for brief rallies aiming to bring attention to juvenile justice and workers’ rights. At City Hall, another small rally took place featuring speeches by LaNesha DeBardelaben, president and CEO of the Northwest African American Museum (NAAM), and Anthony Washington, curriculum manager at the Academy for Creating Excellence (ACE), as well as spoken word performances by Will Rideout and Masai and a song performed by Isaiah Banks.

The event was planned by the Seattle Martin Luther King Jr. Organizing Coalition, an all-volunteer organization. If you are interested in helping organize next year’s event, visit the coalition’s website.