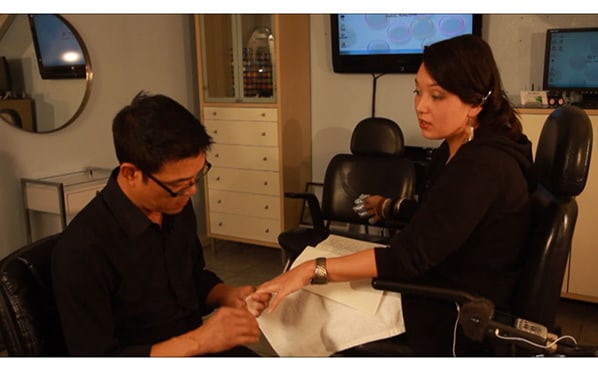 In any given metropolitan area or strip mall in America, chances are there are at least a few Vietnamese-owned nail salons. Tracing the roots of the industry to the diaspora precipitated by the Vietnam War and the humanitarian efforts of actress Tippi Hedren, who paired a local beauty school with the first group of Vietnamese women refugees, filmmaker Adele Pham’s documentary Nailed It takes a deep dive into an insular community and its rich history. For Pham, whose film premiered last month at the Center for Asian American Media Festival in San Francisco, the story is also personal – her father, a Vietnamese immigrant, has familial ties to the industry. Recently we chatted about manicures,stereotypes and identity.

IE: How did knowing more about the history of the industry affect your relationship with or perception of nail salons?

Adele Pham: I state in the intro: “Before I starting making this film, I’d gotten my nails done maybe twice.” In retrospect, I was uncomfortable with my Asian-ness, and whiteness as a mixed race person—It wasn’t just how Vietnamese nail salons are portrayed negatively in the media, but my paranoia about how I was perceived inside an Asian space, not speaking the language and being totally Americanized. Part of the impetus for making the film was self exploration of my Vietnamese heritage. That’s why we go back to my hometown and meet my father, who as a working class immigrant, wanted me to get into the nail industry as a side hustle when I graduated from high school. Both classism and embarrassment about not speaking Vietnamese kept me away from doing nails when I was 17, but as I grew older and began to auto identify as a person of color, and the unqualified mass perception of Asian nail salons as dirty, rude, and scandalous, stuck in my craw—as well as the health risks associated with nail salon work. Investigating the origins of these salons and the role they have historically played in strengthening the Vietnamese diaspora and economic power—really transformed my relationships with Vietnamese people in general. The film gave me a self assigned role within the Vietnamese community.

IE: As someone who’s seen comedian Anjelah Johnson’s nail salon bit on YouTube, I appreciated having her featured in the documentary. I’m glad she was willing to address how potentially racist it is, although in my opinion she talked around the issue rather than facing it head on. Anyways, how did that come about?

AP: From the time I started to tell people I was working on “Nailed It,” the first thing they would ask is if I was interviewing that comedian who does the spot on Vietnamese accent. I always used her routine to start out the film and set the tone for the perception non Vietnamese have of the nail salon. After the interview was cut into the edit, I was actually advised to drop Anjelah’s interview because it felt disconnected from he rest of the characters. I never felt that way. To me her scene is a meta moment where Vietnamese nail techs are “allowed” to speak on how Anjelah’s impression of a stereotypical nail tech makes them feel.

What surprised me most in our interview is the deep ties Anjelah has to the Vietnamese community of San Jose where she grew up, inside the salon. Even her nephew is half Vietnamese. These are the family ties and interpersonal details you don’t get from the “nail salon” routine.

IE: Was it difficult to get the older generation to talk about their experiences?

AP: Anyone who has dealt intimately with the Vietnamese refugee community knows it can be impossible to get them to open up to you. Part of this is war trauma—never let anyone know exactly what your politics are because it could get you killed. Also, there has been so much animosity against the Vietnamese salon. People will call the city on Vietnamese nail salons whether or not there are any health violations going on. Salons have been put out of business because of excessive fines by state health inspectors. So it’s natural they wouldn’t immediately open up to a non Vietnamese speaking person with a camera in their hand. This is where my co-producer Kelvin Saint Pham was very helpful. He’s been working in the nail industry for over 25 years, so older generation Vietnamese people trust and like him. I sincerely doubt that Co Thuan, and through her, Tippi Hedren, would have agreed to be in the film without his seal of approval. In documentary access is key to building a compelling story. It helps that I’m Vietnamese, but I would not have been able to make the same quality of film without Kelvin’s help.

IE: The film is so relatable because you see how many manicurists you interview who see what they do as more of a livelihood than just a job.? What do you hope that audiences who have never worked in any form of service job to take away from the film?

AP: I would like audience to understand that Vietnamese people do this job to support their families. Although some made an exorbitant amount of money from the industry, it’s a working class profession and serves that demographic on both sides of the table. Although the more common stereotype is of the Vietnamese manicurist who is just trying to get clients in and out the door as quickly as possible while talking shit about them in Vietnamese, I have been present in nail salons when a client has an abusive outburst over some imagined injustice. The nail salon in a way, feels like the last frontier of racism against Asians – somehow it’s still acceptable to treat them like sub-humans because of the racist notion that they’re just hustling your money anyway.

It’s not that Vietnamese aren’t ever racist or rude, but sometimes our cultural bluntness, and the fact that Vietnamese speak their language freely inside the salon, is taken out of context and used against them.

IE: What’s next for you? Are you able to talk about any current/future projects you’re working on?

AP: Right now I’m working on another feature documentary about the legacy of racial exclusion laws in Oregon, and how it relates to contemporary hate crimes, and the designation of Portland, OR as “the whitest city in the Nation.” In August Field Of Vision released a short film I directed and produced based on these themes, encompassed by the “lynching” of a Black teenager Larnell Bruce Jr. outside of Portland.

I am also a co-producer on a feature documentary about the legacy of women reggae artists in Jamaica. This project has been on hold for over a year because of funding. At the current moment I’m trying to coordinate a screening schedule for Nailed It, and produce an impact campaign where the film is screened inside nail salons.