Peter Reme Bacho is a Filipino American author who serves on the faculty of The Evergreen State College–Tacoma campus. There are currently plans for his novel Cebu, which won the American Book Award in 1992, to be turned into a feature film.

I caught up with Bacho to learn about his inspiration for the novel and what Cebu’s transition into film means to him.

Daniele Meñez: How has your background led you on the path to become a novelist?

Peter Bacho: I was raised in Seattle’s Central District in the 1950s and 1960s; it was a rich multicultural, working class community. My parents were, at least in the first few years of my life, struggling to eke out a living in an era that was very hostile to people of color. My father was for many years a migrant worker—the fields and Alaska in the summer. I was part of that cycle, until my mom put a stop to it and insisted that he needed to find another line of work.

So, he did, and our economic condition began to improve. Over time, I figured that these were stories that needed to be told. Dad lived a life of “blood money,” and he did it so I wouldn’t have to. My parents insisted that I go to college, so that was never a question. They didn’t want me to break my back working for some boss, like my father did. Unlike most of my generation, I was one of a handful to earn a college degree.

And then the possibility of law school popped up. I was doing well in college, but I had always thought that law was for the sons of privilege, and I was never one of those. But my curiosity got the better of me, so in 1971, off to law school I went. I graduated in 1974 and passed the bar. When I called my mom, she said, “Thank you,” and I knew what she meant. All that hard work, all that sacrifice, had paid off in terms of what my parents’ American born children could achieve.

Although I don’t regret the education that law provided, I did understand early on that being an attorney wasn’t for me. So, I left two years after being admitted to the bar and looked around for something else to do. I ended up teaching—a passion for me. But I also wondered what it would be like to be in the middle of something hot—like the foreign correspondents who reported on far away and important developments. So that’s what I did. In the 1980s, I was in the middle of a debate on U.S. policy in the Philippines and whether the U.S. should back Ferdinand Marcos.

I said no. Principles count, and the U.S. was in danger, particularly after Ninoy’s Aquino’s murder, of being sucked into the country’s civil war. Fortunately, I was writing for some top flight journals and publications at that time: SAIS Review (Hopkins) and The Journal of International Affairs (Columbia), among others. But my most important stage was the editorial page of The Christian Science Monitor, which was well respected among policy wonks and politicians.

I was very good at what I did. But like anyone who plays with words and who does analysis, I was tempted by the great temptation. What if I could create the facts, my own universe, in fact, and determine the outcome of the characters I have created. What then? I am convinced that the lure of fiction is the chance for divinity—the rare opportunity to create a universe, create people, put them in conflict, and determine their outcomes good or bad. 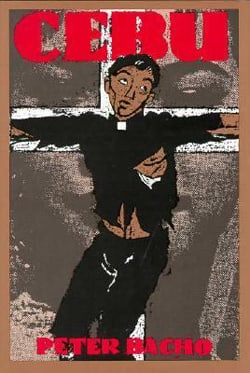 Meñez: What was your primary inspiration in writing your novel, Cebu?

Bacho: I had read many works in Philippine literature (Rizal, Sionil Jose, Rosca, and more) and had also read the slim volume of Filipino American work at the time—it is much larger now. I realized that there was a gap in terms of stories not being told. For me, the gap could be depicted by religion (Catholicism). It was a good way to examine the cultural differences between Filipino and Filipino American cultures. They are wildly divergent.

In the Philippines, religion is part of the fabric of life. Filipinos, especially poor Filipinos, are tied in to the suffering of Jesus and Mary. And that’s because their lives are so hard and religion is one of the few things that bring solace. In the U.S., a society that works, religion for Filipino Americans is much more of a distant thing. Sunday mass, maybe a rosary or two, but that’s about it. It’s this different interpretation that drives my Filipino American protagonist, Father Ben, absolutely crazy and sets up the sequence of events, starting with his affair with Ellen, that lead to his demise. As his Auntie Clara says in her understated way, “Nephew, it’s different here.” So true.

Meñez: What does the novel’s transition into a film mean for you/what place does it hold in your vision?

Bacho: It might mean some extra cash, and that’s always nice. But truthfully, the real challenge was writing the novel because it is just the writer, his imagination and skill, and a pad of paper and a pen—a very solitary, intimate existence. A writer worries about every sentence, every word. A script, on the other hand, is mostly scene and dialogue, and it is just the starting point, and so many others are involved. Once I signed over rights, my involvement was over. It’s up to others now to finish it.

I own the novel, emotionally and otherwise. I won’t own the film—if it ever becomes one. [There is] a trailer, [but it] is just a lure for full funding. It is a very slick trailer, so we are hoping for good things.