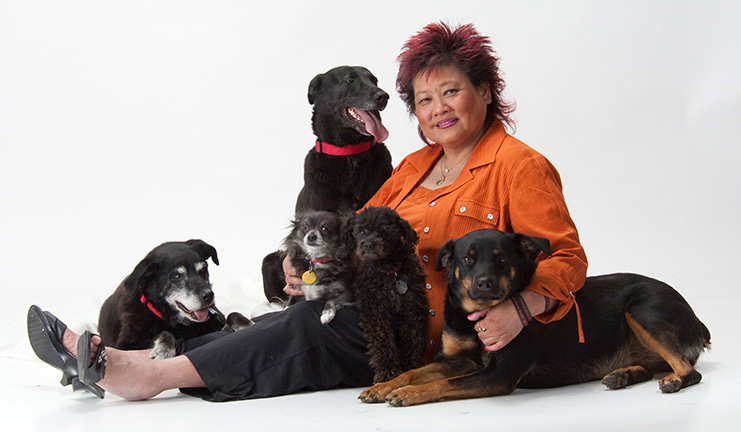 Former Chinese restaurant owner and pet rescuer Ginger Luke passed away on September 22 at the age of 73 after a valiant battle with lung cancer.

Luke was widely known for her fierce resolve, optimism and deep concern for abused animals. In 2006, she founded an organization which, in her words, rescued “death row dogs” so they could be put up for adoption. She worked on behalf of that cause until her last breath.

Born on June 1, 1948, the gregarious Seattle native was the eldest of four siblings. She grew up in the Lakewood neighborhood, near the hydroplane pits. She attended Franklin High School and Edison Vocational Technical Institute (now Seattle Community College) before finding work at the University of Washington’s payroll department.

Her father, James “Boo” Luke, was a prominent Chinatown leader and World War II veteran who served as a Cathay Post commander in 1953. He ran Luke’s Pharmacy for many years with partner Hoover Mar, his brother-in-law. After Hoover’s death, Bertha Tsuchiya joined the business.

Luke’s restaurant career began in 1980 after she and husband Wayne Yee took over the Silver Dragon Restaurant from the previous owner. The red-carpeted establishment, which served classic chop suey and dim sum during an era where a platter of chicken feet was regarded as a curiosity, was located up a flight of stairs in the Milwaukee Hotel. It benefited from mainstream newspaper write-ups, including a rave review from Seattle Times restaurant critic John Hinterberger. The restaurant’s cocktail lounge was popular among Chinatown patrons. Jazz pianist Deems Tsutakawa was a Thursday regular at the piano bar.

“It was a lot of work,” Luke said. “Too much work. Up and down the stairs. I wanted out of there as soon as I got in it.”

One highlight of Luke’s time at Silver Dragon was when Liza Minnelli, in Seattle for a performance, called to make a reservation for a party of 12. Luke got an autograph and posed for a photo with the star. “Everybody loves the picture because I guess it’s a big deal,” she said, laughing.

After Luke and Yee divorced, Luke relinquished control of the Silver Dragon to Yee and took over sole control of the couple’s second asset, the Rickshaw Restaurant and Lounge. The Greenwood business, which drew many loyal customers, opened daily for karaoke. It offered cheap drinks and a vast playlist of songs.

Luke’s experience at the Rickshaw was not without adversity.

During an armed robbery, Luke was shot five times with a .38 caliber pistol. Her second husband, Jakob Lueck, who ran the business with her, was also shot. They were transported by ambulance to Harborview Hospital. “I was there for a long time,” she recounted. “I had three different surgeries. I didn’t think I was going to make it. It was terrible. It hurt. The doctor said, ‘You’re very lucky to be alive.’ But I lived, and my husband lived. It took me six to seven months to recuperate.

“After that, I really didn’t walk into the restaurant again. But you do what you need to do and you’ve got to be brave. So that’s what I did. I learned a lot about life. You have to be patient to be able to survive something like that. You cannot be afraid of your demons. You cannot give up. You have to keep going. In a way, I’ve taught people a lesson about appreciating life and about dedication.”

Luke sold the Rickshaw in 2017. By then, her driving passion had already steered her into animal welfare. During a food delivery to an apartment, Luke encountered an abused dachshund that was locked in a bathroom. She convinced the owner to sell the dog to her for $50, then emailed friends and found it a new home. Learning about other dogs that had been mistreated, often facing euthanasia, Luke decided to start Ginger’s Pet Rescue, a non-profit devoted to finding permanent homes for abandoned and abused dogs. Since its inception, Ginger’s organization has placed thousands of these animals with compassionate owners.

“Ever since I was little, I couldn’t hear,” Ginger explained. “So I can’t talk to people. But animals I could talk to. Amazing. They understand me. Because of that, I could talk to the dog and the dog could talk to me, back and forth. They wag their tail. They shake their hand. They give me things through the mouth. They are very generous, wonderful pets.

“Animals have a lot of compassion. You can be so unhappy, but along comes a dog, a cat or a bird. All of a sudden, it lifts you. When you’re upset and crying, they’re licking your tears off and they love you. They understand humans better than humans.”

Terry Luke, Ginger’s brother, said that when Ginger was very young, she “had a very high fever which burnt out one of her eardrums. From that point forward, she wore a hearing aid.”

About four years ago, Luke was diagnosed with lung cancer. Her doctor told her that she likely had less than five months to live. “I heard that, and I’m going, ‘I can’t die in five months! I have a hundred dogs to save!’ The doctor laughed, but I said, ‘I’m not joking. I’m serious.’”

Luke outlived her doctor’s prediction, allowing Ginger to work on finding homes for many more dogs.

“She lost hearing in her good ear from the chemo and radiation treatments,” Terry Luke said. “So her only way to communicate was texting and lip reading. Sadly, near the end, the cancer took her vision away.”

Luke’s family said contributions in memory of Ginger can be made to Donate to Death Row Dogs | Ginger’s Pet Rescue (gingerspetrescue.org)