On the surface, Seattle’s science, technology, engineering, and mathematics (STEM) industries might seem quite diverse. After all, Seattle and the Pacific Northwest are attracting tech talent from all over the country and across the world.

According to a 2011 survey by the U.S. Census Bureau, people who identify as white make up over 70.8 percent of the STEM workforce in the United States, with 14.5 percent identifying as Asian, 6.4 percent as Black, 6.5 percent as Hispanic or Latino, 0.4 percent as American Indian and Alaska Native, and 1.4 percent as “some other race and Native Hawaiian or other Pacific Islander.”

However, under the surface of the aggregate data are the experiences shared by people of color in the STEM industry that point to feelings of isolation and a lack of sufficient opportunities for underserved communities to pursue STEM in school.

“In my personal experience at Microsoft, I didn’t see any other Black people. When I did, we created a community to support each other because there’s this tension to assimilate to the default culture, which is really white culture,” said David Harris, who is now a program manager at the Technology Access Foundation (TAF). “When you don’t have other folks who have the same experiences or just don’t look like you, then those are the kind of things that you face in those environments.”

Harris left Microsoft in 2009 to open up his own tech tutoring business, which eventually led to volunteering with TAF. The organization supports students of color in underserved communities who are interested in working in STEM. Harris is now a program manager at TAF Academy, a STEM-focused school based in Kent, which is run by his organization in partnership with the Federal Way School District.

As a Filipino working in technology, Jon Madamba said he was constantly aware of his race in previous jobs where he was often the only non-white person in the room. Madamba is currently a project manager for Filipino Community of Seattle’s STEAM Lab (science, technology, engineering, arts, and mathematics), which provides technology instruction for low-income, immigrant, and at-risk youth in Rainier Valley. Earlier this year, Madamba founded tech start-up Dokoji, which produces a smartphone app that helps users plan social events.

As a child in the Philippines, Madamba said he had an early interest in technology. As a result, he often spent his days picking apart computers, fixing his bike, and dissecting radios to figure out how they worked.

“There were very little role models within my community … so I wasn’t afraid to ask for help,” he said.

But that isn’t always the story of other children in underserved communities who do not get the encouragement they need or have access to STEM mentors, said Madamba. In the Filipino community, Madama said parents need to get involved to engage their children with STEM programs, whether they are at school or in community programs.

“We need to create more of a forum for Filipinos in the tech and STEM industry to network and mentor others,” Madamba said. Additionally, Filipino communities and other underserved groups must show support for minority-run businesses in STEM fields and help celebrate those companies’ successes, he said.

“Underserved communities face an access issue,” Pham said. “Less than 10 percent of public high schools offer computer science, and even University of Washington, the state’s top producer for tech talent, graduates only 300 students from its computer science program each year.”

While the obvious solution for supporting budding scientists and engineers in underserved communities is to designate funding for STEM programs in Seattle’s public schools, the problem can’t be remedied immediately. As a result, efforts on the community level are being made to support people of color interested in STEM.

“Community organizations are working hard to increase the number of women and underrepresented minorities in tech,” Pham said. “Much of the shortage stems from a pipeline issue—we need to get kids from more diverse backgrounds interested in pursuing careers in technology. In addition to K-12 and higher education efforts there’s progress being made in adult training. There’s Ada Developers Academy for women, and the WTIA is launching a Workforce Institute that aims to expand high-tech job opportunities for women, underrepresented minorities, and veterans.”

Rather than focusing on pipeline issues, Harris believes in providing “fertile ground” for people who might be interested in STEM. In order to provide more hands-on exposure in the STEM fields, Harris started Hack the CD, a forum and challenge for people of all ages living in Seattle’s Central District, a historically predominantly African-American neighborhood, to brainstorm solutions to social problems their community is facing. According to Harris, this ranges from creating solar-powered water filters to leading campaigns to get more girls involved in STEM. Additionally, Harris’ program seeks to get students involved in these conversations and eventually mentor them through a STEM Expo, in which they get the opportunity to pitch their projects to a panel of judges, all of whom work in STEM jobs, for the chance to make their projects come to life and be used by their community.

“That’s what’s exciting about my job,” Harris said. “If you give students the resources, they don’t have the same issues as adults, so they go for it. You can imagine if they are thinking about these things now, as they get to college and beyond, they really have a head start. That’s really the theory of change that we’re [working] with.”

Permanent curriculum focused on STEM courses and supportive community programs are the backbone of what Harris calls “fertile ground,” or a space in which people of all ages can explore their interests and how they can bridge those with technology to create opportunities for themselves.

“You think of anything that they might be interested in, whether it’s video games or fashion or drawing or painting—all of those things, there’s some aspect to them that’s technical or that’s also artistic,” said Harris. “When we look at it holistically, allowing kids to be creative is really what it’s about because that’s the highest level of thinking. I think what STEM education is about is really giving students the skill set and ability to think critically. … So I think if we frame it that way, students can really come with their own interests and passions and then find their ways into the Googles and Facebooks of the world, but also into government and social work and be able to bring those skills to those areas as well.” 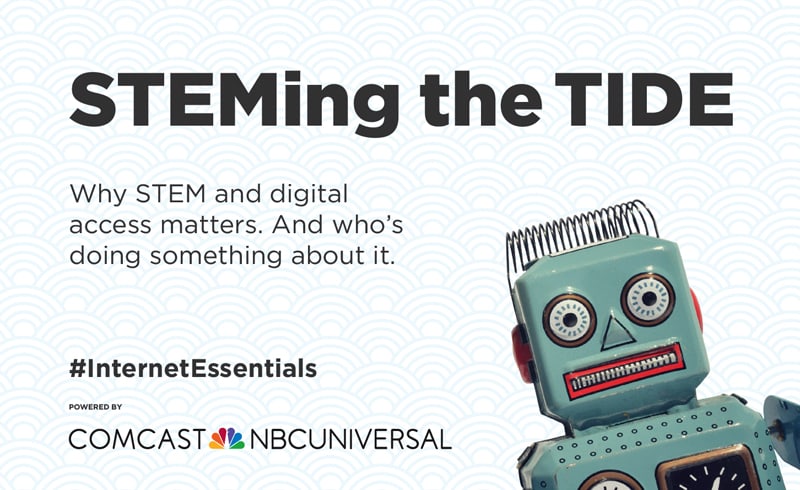