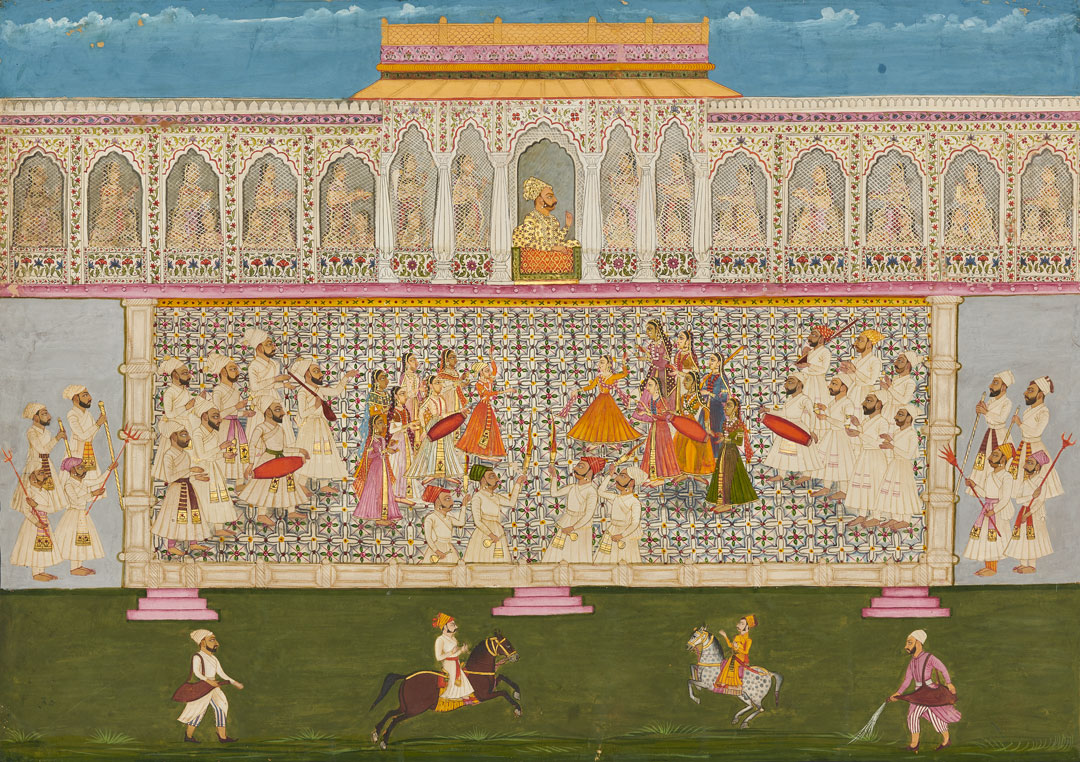 In 2009, SAM brought us an exhibit of 56 paintings in the exhibit Garden and Cosmos from the Mehrangarh Museum in Rajasthan, India. The new exhibit, Peacock in the Desert, features over 250 objects from the same museum – paintings, textiles, jewelry, ornaments, weaponry – that tell over 600 years of Jodhpur royal history.

Jodhpur was one of the larger Rajput kingdoms of India that had been established by the Rathore clan whose current king is Maharaja Gaj Singh II. An Eton and Oxford-educated man who was made king at the tender age of four, Gaj Singh II returned to India in the 1970s to assume his largely symbolic title of Maharajah. He converted the family fort, established in 1459 by his ancestor, Rao Jodha, into a public museum by opening its palaces, shrines, and courtyards for public view. He also donated over 15,000 objects from his personal collection to preserve the history and legacy of his family.

The SAM exhibit spans two floors. When entering the exhibit on the third floor, one is greeted by life-sized mannequins of an elephant and two horses forming a bridal procession. The elephant is decorated with a gilded silver necklace, a trunk cover, an embroidered silk cover and features a howdah and chattr (elephant seat for the rider and a parasol). The horses are also bejeweled and royal insignia flank the animals.

Following these animals is a richly embroidered palanquin in which a royal bride was carried into her family home. Completely covered on all sides by thick embroidered fabric, there is a small mesh hole on the side no more than four inches wide from which she can peer out into the celebration and festivities surrounding her. The initial impression this royal procession leaves is of an orientalist fantasy of phenomenal wealth and spectacle with a mysterious hidden woman at the center of it all.

Any such preliminary assumption is quickly dissipated by the exhibits on the fourth floor which feature the history of the Rajputs through their political relationships and statecraft, through their religious observations and practices, their weaponry and military might, and life in the inner sanctum of the zenana (the women’s palace quarters).

The watercolor paintings, enriched by rich pigments of gold, lapis lazuli, and similar precious material, depict Rajput kings as statesmen, as devout Hindus, and patrons of the arts. Other paintings illustrate either genealogies of the Rajputs or illustrate narratives of Hindu gods and goddesses.
Jodhpur ateliers were renowned for their book arts and paintings depicting the nine avatars of Durga or Krishna’s life exemplify this tradition.

The Mughal influence is seen in the paintings in terms of dress and architecture represented. A stunning object from this period is a 16th century Mughal royal tent, the Lal Dera, which housed the Emperor on the battlefield. This tent takes up a whole gallery in the exhibit and is one of its star attractions. Similarly, the galleries holding objects from the period of the British Empire when the Rajput kings participated in the Delhi Darbars include a chair, medals, coat of arms, presentation swords and a resplendent Star of India.

Another section of the exhibit depicts Rajput weaponry – punch daggers, swords, buffalo hide shields, matchlocks. The daggers and swords whose hilts are bejeweled and carved combine beauty with glisteningly deadly steel blades. Another shield is completely decorated with diamonds, rubies, and emeralds with the sun in the middle. Not only did this shield symbolize the Rathore descent from the Sun god, but its gems could reflect bright sunlight and blind the enemy and give the warrior king an edge over his enemy.

The section devoted to the zenana dismantles any notions we may have of secluded women as passive and disempowered. Several paintings depict zenana life where the women observed happenings in the public arena of the palaces through marble meshed windows which allowed them to see out without being seen. One painting shows a king playing chaupar (a strategy game) with a zenana woman where the woman’s expression suggests she is besting her opponent and enjoying the moment.

Zenana objects include ornate clubs that the women used to exercise; elaborate jewelry in kundan style where gems are set in layers on finely hammered 24 carat gold, a display of a bride’s trousseau including carved jewelry cases, fine silks, perfume cases, a beautiful swing in soapstone that was used for leisure and entertainment; and everyday objects such as silver cases for serving paan (betel leaf), jars holding collyrium for eye make- up, and a foot scrubber for a royal pedicure.

These objects speak to the cosmopolitanism of the zenana where brides and concubines from different parts of India brought their cultures, religious practices, and traditions into the Rathore kingdom. The replica of the throne room in an adjacent gallery pays tribute to the extraordinary textile work that flourished under the Rajputs. A large canopy that practically covers the whole room is meticulously hand embroidered with thousands of tiny stitches in fantastic floral patterns. The talents of the anonymous artists and crafts people whose creativity and labor provided the accoutrements of royal life were most impressive.

The exhibit is unique and offers a multi-faceted historical view of the Jodhpur royal family through the arts they patronized, commissioned and collected. The book accompanying the exhibit available at the gift shop is well worth its steep price for the gorgeous photographs and the substantive scholarly essays that offer a nuanced context to the exhibit. SAM has also organized a series of lectures and performances that complement this exhibit. Peacock in the Desert offers Seattle a wonderful opportunity to experience Indian history, culture, and art and will appeal to visitors of all ages.